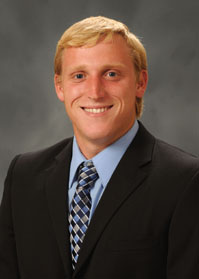 2013 Season
Atlantic Sun All-Academic member … went 6-3 with a 3.23 ERA (23 ER/64.0 IP) in 19 appearances (eight starts) last season … won four straight decisions from 4/2-27 … earned the win in his first collegiate start vs. Tennessee Tech on April 2 … tossed four shutout innings against the Golden Eagles … pitched seven innings of one-run ball in the 8-2 over Kennesaw State on April 27 … registered first complete game at Illinois-Chicago on May 5 … made the start versus USC Upstate in the A-Sun Tournament on May 25 … had four strikeouts in 2.1 innings of work out of the bullpen at Winthrop.

2012 Season
Made 14 relief appearances for the Bucs … earned the win at Wofford after tossing two innings of two-hit ball against the Terriers … didn’t allow an earned run in eight appearances … pitched a career-high five innings against Western Carolina on April 25 … allowed one run on three hits, while striking out two versus the Catamounts … tossed three innings of one-hit ball against Stetson on May 11.

2011 Season
Saw action in eight games on the mound for the Bucs...Posted a 1-0 record in 8.2 innings pitched...Had his longest outing of the season against Furman as he pitched 2.2 innings of scoreless relief (4/5).