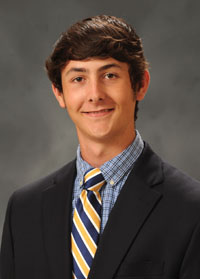 Attended Jefferson County High School ... went 9-1 during his junior season at Jefferson County and helped pitch the Patriots to the state Class AAA sectionals … along with his impressive record on the mound, the right-hander struck out 73 batters in 69.0 innings, while registering a 1.53 ERA and held opponents to a .183 batting average in 2012 … earned All-PrepXtra honors, while tossing a seven-inning two-hitter with five strikeouts in Jefferson County’s Region 1-AAA semifinal win over Science Hill, 4-0 … named 2-AAA Pitcher of the Year, TBCA First Team All-Region, and 2-AAA All-Conference, while leading the Patriots to the IMAC regular season and tournament championship titles ... named Pitcher and Player of the Year in 2013 ... also hit .444 at the plate and played shortstop for the Patriots in 2013, but he will focus his duties on pitching while playing for the Bucs.

Plans to major in physical therapy.