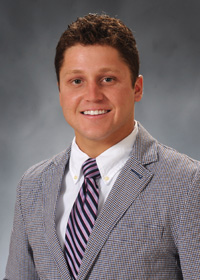 2016 Season
Appeared in 18 games including one start...Struck out two University of Tennessee batters at Thomas Stadium on March 9...Had 11 games where he did not surrender an earned run...In his last five appearances of the season, he did not surrender a run in 5.1 innings while allowing three hits...Cate finished the season with a 1-1 record.

2015 Season
Appeared in 25 games, which was the most by any reliever...tallied a 3-3 record with a 5.72 ERA...had four saves to lead the Bucs...had 12 outings of at least an inning without giving up a run...second best strikeout per inning ratio on team (1.21)...career best six strikeouts against Mercer in 2.2 innings...seven straight outings of at least one strikeout.

Prior to ETSU
A right-handed pitcher/infielder from Sevier County High School … started every game for the Smoky Bears and lettered in baseball, football and basketball … along with pitching, Cate played second, short, third, and outfield at Sevier County, while generating a batting average over .400 during his first three seasons with the Smoky Bears … Cate, a member of the CABA Wood Bat National Championship Team, pitched his team to the title along with driving in the game-winning run ... as a freshman, Cate received Rookie of the Year honors, while being selected to the TBCA All-Freshman Team in 2009 ... was a member of the 2012 TBCA Showcase Team of Tennessee and named All-Tournament Team as a pitcher at Perfect Game WBBA 17U in Atlanta.