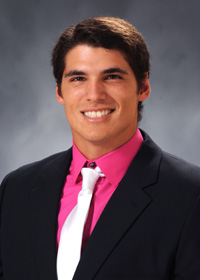 2014 Season
Named to the A-Sun All-Academic Team … went 7-5 with a 4.06 ERA (46 ER/102.0 IP) in 20 appearances (16 starts) for the Bucs … led the team in wins, innings, starts and strikeouts … ranked 29th nationally in starts and was fifth in the A-Sun in wins … recorded his first-ever complete game in a win over Mercer on May 15 … tied a career high with eight strikeouts against Stetson (3/22) and USC Upstate (5/2) … tossed at least six innings in 11 starts … earned his first collegiate save in the win over Mercer in the A-Sun Championship … registered four straight quality starts to begin the year, while allowing three runs or less in nine of his 16 starts.

2013 Season
Atlantic Sun Conference Scholar and A-Sun All-Academic member … missed two months of the season due to arm injury (March 3-May 4) … made three starts prior to suffering injury and earned a win by tossing seven strong innings versus Penn State on Feb. 17 … allowed three runs on eight hits while striking out four against the Nittany Lions … tossed a career high eight innings in a no-decision against Seton Hall (Feb. 24) … struck out a career high seven hitters vs. Mercer in the A-Sun Tournament … got the starting nod against No. 2 Vanderbilt in the NCAA Regional.

2012 Season
Named to the A-Sun All-Academic Team … tied for the team-lead with 20 appearances on the mound … set the ETSU record for fewest hits allowed per nine innings (7.6 hits) … earned his first collegiate win on 3/20 vs. Asheville … tossed three innings of one-hit ball against the Bulldogs … won his second straight decision seven days later after limiting Radford to two runs on five hits in five innings of work … struck out a season-high six batters vs. North Florida on April 6 … didn’t allow an earned run in eight appearances.

Prior to ETSU
A four-year letterwinner for head coach Todd Fitzgerald at American Heritage School…Helped lead the Patriots to 105 combined wins during his four years on the squad, including a state and national championship in 2008…Earned first-team all-county and second-team all-state in both 2010 and 2011…Was named first-team all-county and third-team all-state in 2009…Played in the Sebring All Star Game following his senior season…Finished his career with 207 innings pitched and a 29-5 record…Had 246 strikeouts and just 43 walks, while finishing with an impressive 1.84 ERA.