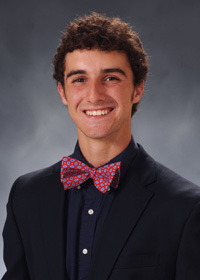 2017 Season
Played in all 59 games with 58 starts for ETSU...Finished with the fourth highest batting average at .337...Drove in 48 RBI and drilling 18 doubles to finish second on the team in both categories...His 82 hits ranked third on the team and tied for sixth in the Southern Conference...Led the team in multi-RBI games with 16, including a four RBI showing against Western Michigan Feb. 25...Had second longest hit streak for the Bucs with 13 from March 5-31 while opening the season hitting safely in 23 in the first 24 games...Led the team in three-hit games with 11 on the season while his 26 multi-hit games tied him for second on the team.

2016 Season
Played in a career high 34 games including 24 starts...Saw most of his playing time out of the designated hitter slot...Recorded a .312 batting average with .409 slugging percentage and .373 on-base percentage...Tallied a four game hitting streak where he connected with eight hits...Bailey recorded eight multi-hit games...Hit his first collegiate home run against Purdue on March 6, and he finished the game going 3-for-3 with a double, two RBIs and a pair of runs scored against the Boilermakers.

Prior to ETSU
Played pitcher/infield for Coach Ryan Wagner at Dobyns-Bennett … hit .487 with five home runs in his senior season with the Indians … named first-team all-conference and conference MVP in 2014 … helped guide Dobyns-Bennett to conference, region and sub-state championships.