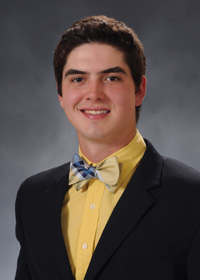 2015 Season
Member of the SoCon Academic Honor Roll...started most games by a freshman (13)...In first two games, accumulated 12 innings of work and allowed two runs off nine hits and ten strikeouts...had longest outing against UNCG with seven innings while striking out seven...started and went 5.2 innings at VMI on April 10...surrendered five hits and one run while striking out five and not allowing a walk against the Keydets...finished the season with a 5-6 record...tied for the most wins on the team...had the lowest batting average against for starters

Prior to ETSU
Was a four-year letterwinner at Station Camp High School and played two seasons at Dyersburg State CC … went 6-3 with a 3.68 ERA in 12 appearances (10 starts) last year at Dyersburg State CC … allowed two earned runs or less in eight appearances in 2014 … allowed one run and struck out five in seven innings against Southwest Tennessee Community College on March 23, 2014 … two-time Team Pitcher of the Year at Dyersburg and was named Player of the Year for the Eagles in 2014 … was a two-way player for Coach Ballard at Station Camp HS … set the program record for career wins, innings and strikeouts at Station Camp, while also setting the single-season record for wins … three-time all-county and two-time all-district player for the Bison, while also being tabbed all-region and All-TBCA Team as a junior.