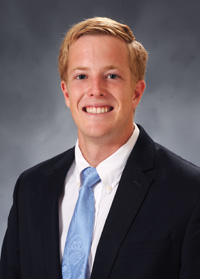 2016 Season
Appeared in three games coming off the bench...Sported a .333 batting average...Picked up his first hit of the season at Tennessee as a pinch hitter.

2015 Season
Member of the SoCon Academic Honor Roll...appeared in seven games with one start as the designated hitter...tallied his first hit of the season as a pinch hitter against Morehead State on March 31...finished the season with a double and an on-base percentage of 0.300.

Prior to ETSU
Played for Coach Ryan Edwards at Science Hill before spending two years at Surry Community College in Dobson, N.C. … hit .292 (21-82) with two doubles, eight runs and five RBI in 27 games for Surry CC in 2014 … drove in 17 runs in the summer of 2014 for the Statesville Owls, which ranked third in the SCBL … named 2014 Surry Knights Scholar-Athlete of the Year … selected to the SCBL All-Star Team.