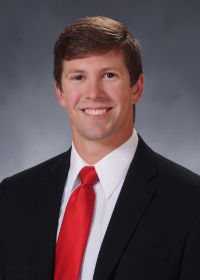 2016 Season
Was a crucial pitcher for the Bucs in 2016...McCann appeared in 26 games including six starts...He started the season in the bullpen, but he earned his first start of the season at Winthrop on March 22...In that game, McCann went five innings with no earned runs, three hits, five strikeouts and no walks...During the season, he sported a team best 8-4 record in 60.2 innings pitched...He recorded five strikeouts and had the lowest opponent batting average on the team (.252)...Was a big key in the road sweep of Samford where he came out of the bullpen and tossed 2.2 innings of scoreless ball, and with just a day of rest, started against the Bulldogs where he went 5.2 innings while allowing one run and four strikeouts...Had a career day in the elimination game of the Southern Conference tournament against The Citadel...He went eight innings with two runs and a season best 10 strikeouts to lead the Bucs to a 4-2 victory over the Bulldogs.

2015 Season
SoCon Academic Honor Roll member...pitched in 22 games with three starts...tossed 35.1 innings, which was the most for relievers...picked up first victory against Miami (Ohio) on March 14 when McCann pitched 2.2 innings while striking out two...saw longest action on May 16 vs Wofford with five innings and three strikeouts...went four innings at Asheville without giving up an earned run with three strikeouts and one walk...tossed two innings against West Virginia on March 8 without a run and striking out a season high four batters.

2014 Season
Named to the A-Sun All-Freshman Team … went 5-4 with a 4.78 ERA (34 ER/64.0 IP) in 18 appearances (12 starts) for the Blue and Gold … made his first collegiate appearance vs. Furman (2/18), while earning his first win in his first collegiate start against Eastern Kentucky (3/5) … tossed five shutout innings with a career-high six strikeouts against the Colonels … recorded seven innings of one-run ball in the win over North Florida on April 13 … recorded a quality start (3 ER/6.0 IP) and struck out five to pick up the win over Mercer on May 16 … also, defeated the Bears in an elimination game of the A-Sun Championships to post his fifth win of the campaign.

Prior to ETSU
Three-time all-conference selection for the Sullivan South Rebels … the Kingsport, Tenn. native was named First Team All-Big 8 in 2012 and 2013, while landing Big 8 District All-Tournament Team honors as a sophomore … went 3-4 with a 2.02 ERA in eight games (six complete games) as a senior … also, struck out 58 batters in 48.1 IP … in 2012, McCann also participated in the TBCA Showcase for Tennessee … in May, at the District 1-AAA Tournament, McCann went 3-for-4 with a home run and two RBIs against Daniel Boone … as a sophomore, McCann went 2-1 with 20 strikeouts in 20.1 innings.