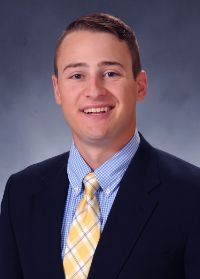 2017 Season
Appeared in 22 games for the Bucs, including one start against Tennessee May 2 where he tossed three innings and allowed two runs ... After picking up his first loss of the season against UT, Gentry recovered nicely and would appear in 10 more games, going 3-0 in that span with conference wins over The Citadel and Samford twice ...

2016 Season
Mainly a reliever for ETSU in 2016 but did start in three games for the Bucs ... Had his first start of the season at UNC Asheville where he tossed two innings with one run allowed and two strikeouts ... Had his best start at Wofford on May 13 when he went three inning with one run and a strikeout ... In seven of his 11 relief appearances, Gentry did not surrender a run including a five game span from March 12-April 10 ... Had a season best four strikeouts in two innings against Northern Kentucky on Feb. 28...He finished the season 1-0 and 16 strikeouts.

2015 Season
Member of the SoCon Academic Honor Roll ... pitched in 18 games with one start ... struck out 26 batters with a career high four against UNC-Asheville on April 7 ... Had seven outings without giving up an earned run ... Had seven strikeouts combined in back-to-back outings.

Personal
Son of Scott and Amy Gentry … born March 13, 1996 … majoring in business with a concentration in supply chain and logisitics.