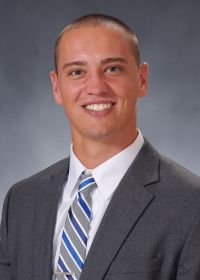 2016 Season
Drafted in the 14th round by the Pirates (435th overall)...TD AmeriTrade Home Run Derby winner...ABCA/Rawlings All-Region...Louisville Slugger All-American...First team All-SoCon...Johnny Bench award watch list member...SoCon May player of the month...Louisville Slugger and SoCon player of the week...Owenby led the Buccaneers in many offensive categories: batting average (.374), at bats (235), hits (88), home runs (17) and slugging percentage (.660). He was second on the team in doubles (16) and RBIs (60)...He posted the most multi-hit games on the team (29) including 11 games with three or more hits...Was second on the team with multi-RBI performances including a pair of games with five or more RBIs...Had a stretch of four consecutive games where he hit a home run...Hit a home run in three straight games twice in the season...Posted a team high 7 RBIs against Northern Kentucky where he went 2-for-4 with two home runs...Posted three two home run games (vs NKU, at North Carolina A&T and at Wofford)...Had a stretch of five games where he knocked at least three hits in each game and seven straight games with at least two hits...Held hitless in only 11 of the 57 games started...Started all 57 games at catcher (49 games) or DH (8 games).

2015 Season
Louisville Slugger Freshman All-American...SoCon All-Freshman Team...SoCon Player of the Week in May...appeared and started in 47 games (39 at catcher and eight as the designated hitter)...had most starts as a true freshman...in first collegiate game, hit a two-run homer against Eastern Kentucky...had 14 multi-RBI games...tallied an eight game hitting streak where he went 13-for-29 with six doubles and six RBIs...went 4-for-5 against Mercer with two doubles and two singles with a run scored...had the lowest stolen base allowed percentage as a catcher (.810)...had the best fielding percentage of all catchers (.988)...finished the season with a 0.310 batting average, 0.409 on-base percentage, and 0.497 slugging percentage.

Prior to ETSU
A two-sport standout in football and baseball at Powell High School … was a four-time all-district and all-conference baseball player … was also an all-district selection in football for three seasons, while earning all-state honors his final two seasons … ran and passed for over 1,000 yards in both his junior and senior seasons.