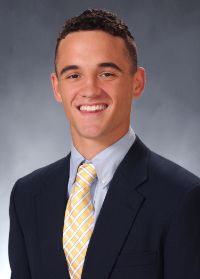 Prior to ETSU:
Graduated from Dobyns-Bennett High School in Kinsport, Tenn...Under head coach Ryan Wagner at DBHS, he compiled a 6-1 record last season...Cook tossed 45 innings pitched with 66 strikeouts...He picked up three saves with a 1.59 ERA...He was a member of the 2015 All 2-way Team, All-Conference, Supper-22 team, and All Tournament....In 2014, Cook was part of the 2014 All Tournament and Super-22 team...While in high school, he did not pitch during his freshman year at Dobyns-Bennett, but the following season was able to make the varsity team and pitch often...One of his biggest baseball accomplishment was during his junior year, he compiled the sixth lowest ERA in the state of Tennessee with 0.88...In his free time, Cook enjoys playing golf and fishing...He is a finance-corporate finance and investments major at ETSU.