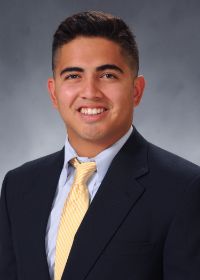 2016 Season
Started in ten games while coming out of the bullpen five times...He was one of two players that didn't surrender a loss (minimum one decision)...Had his best start of the season in his first game for the Bucs against Bowling Green State...He went six innings without allowing a run and striking out three in his first ETSU win.

Prior to ETSU: Gonzalez graduated from USC Sumter Community College in 2015...While under head coach Tim Medlin, he accumulated a 4.50 ERA in 66 innings pitched with 62 strikeouts during his sophomore season...During his freshman season, he went 6-4 with a 3.75 ERA in 58 innings pitched...In the summer of 2015, he played for the Battle Creek Bombers under head coach Robert Robinson...Gonzalez's biggest baseball accomplishment was making it to the JUCO World Series in 2015...He pitched seven innings with nine strikeouts in the Regional Championship game...In his free time, he enjoys going to the beach and golfing...Gonzalez is a business marketing major at ETSU.