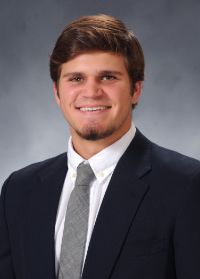 2018 Season: Served in a dual-threat role for ETSU as a sophomore coming off the bench as an outfielder while also coming out of the bullpen as a sidearmed relief pitcher ... Made five appearances in his first collegiate pitching season without allowing an earned run through 4.1 innings ... Held batters to a .125 batting average while allowing just two hits in 2018 ... As an outfield sub, Beeler appeared six times and had two official at-bats with one producing an RBI vs. Florida Gulf Coast.

2017 Season: Appeared in 11 games as a position player with eight pinch hit at-bats ... Recorded his first collegiate hit with a single in ETSU's final regular season contest vs. VMI after subbing in as a defensive replacement in right field ... Finished with one run, one RBI and a stolen base for ETSU in non-conference action.

Prior to ETSU: Graduated from the Webb School of Knoxville in 2015, where he lettered in both football and baseball ... Played under head coach Jordan Wormsley in baseball for five seasons at shortstop and pitcher ... As a batter collected a 0.396 batting average his senior season with 17 stolen bases, nine doubles and 23 RBIs ... As a side-arm style pitcher, he hurled 59.1 innnings with an ERA of 0.94 and finished with a 6-1 record ... Tallied 52 strikeouts and 12 walks during that same season ... Three time All-District, All-Region and All-State member during his sophomore, junior and senior seasons ... Has played every defensive position between his high school and summer teams ... Named the Region Tournament MVP ... Equally impressive on the gridiron, recording over 1,000 all-purpose yards as a QB and WR ... threw for 15 TD's and only four interceptions.