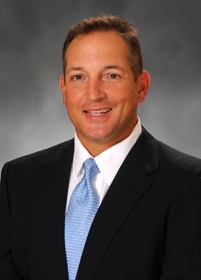 Tony Skole enters his 18th season as the Buccaneer skipper. The Roswell, Georgia native has brought confidence and respect to the East Tennessee State baseball program. A winning attitude, superb graduation rates, excellence in community service and a baseball team that is as close as a family are attributes that reflect on the man who will guide the Buccaneers into the 2016 baseball season.

When Coach Skole came to ETSU in the fall of 1999 he found a program that was searching for strong leadership and a rebirth of success. He instantly instilled a sense of pride in those players who were wearing the Blue and Gold.

Since taking over the program, Caleb Moore and Paul Hoilman received conference Player of the Year honors, Kerry Doane landed the program’s first-ever Pitcher of the Year accolade, while the Bucs have also seen 42 all-conference and 42 conference Player/Pitcher of the Week selections under Skole’s watch. Meanwhile, in the classroom, academic success has become a backbone of his program. Hundreds of players have received academic accolades and had great success in the classroom. During his tenure with the Bucs, over 20 players have moved on into professional baseball, including five players drafted from the 2006 squad.

Hoilman had one of the best individual seasons of any Buccaneer in 2010, the ETSU slugger set 10 school records on his way to earning the Atlantic Sun Conference Player of the Year and Scholar Athlete of the Year accolades. Hoilman also was named a Louisville Slugger First Team All-American by Collegiate Baseball newspaper. ETSU also had two first team all-conference selections for the first time since 2005 as the Bucs had five players named All-Atlantic Sun.

In 2004, Moore arguably had the best season in ETSU baseball history, leading all NCAA Division I players in batting average (.455) and doubles (.60 per game). Following the season, Moore was named as a Louisville Slugger All-American by Collegiate Baseball newspaper.

"Making ETSU Baseball important again in the minds of our players, administration, alumni, and community was our first objective," said Skole. "We then wanted to develop a tradition that would be in our players' hearts for the rest of their lives. Our players understand that ETSU Baseball is something that will be important to them their entire life – not just for the years they are on campus.”

“It has been very enjoyable and gratifying to see all the pieces of the puzzle come together. My early years at ETSU were very difficult, but we knew it was going to be that way when we arrived. We had to be very patient – and it was frustrating at times – but we now have established a foundation and implemented our system. We have created a new tradition — a winning tradition. It is nice to see our program develop. It has taken some time, but because of a strong commitment to our baseball program by our administration, we have been able to recruit some very talented young men. It has been nice to see them mature into successful college athletes. Our program at ETSU is now in a position to contend for Southern Conference Championships and earn bids to the NCAA Tournament.”

The Bucs achieved that goal in 2013 as the Blue and Gold won four straight games in the A-Sun Tournament to capture their first-ever conference tournament title and earn the automatic bid to the NCAA Regional for the first time since 1981.

The 2013 team recorded 36 wins, which tied for the third most in program history and placed ETSU in the Nashville Regional where the Bucs took on host and number two national seed Vanderbilt and ACC at-large foe Georgia Tech in the NCAA Tournament. In addition, the Blue and Gold set top-five marks in team ERA (4.13, 3rd), saves (9, T-5th) and stolen bases (88, 5th).

Coach Skole saw five players placed on the all-conference teams as senior right-hander Kerry Doane became the first player in school history to receive conference Pitcher of the Year honors. Doane, who led the NCAA in complete games (12) and innings pitched (147.0), also became just the third Buccaneer player to be named First Team All-American by Louisville Slugger. Doane also received All-American honors from the American Baseball Coaches Association (ABCA) and the National Collegiate Baseball Writers Association (NCBWA), along with being placed on the Golden Spikes and National Pitcher of the Year semifinal lists. The right-hander finished the season 13-2 with 2.14 ERA and was drafted in the 24th round by the Cleveland Indians.

Nationally known for being an outstanding recruiter and a great teacher of the fundamentals, Coach Skole and his staff are ensuring that Buccaneer baseball will become one of the nation’s top college programs and compete on a national level.

“It has been our goal from day one to give ETSU a baseball program that will last, and one that will be worthy of post season play every year,” Skole said. “We want to continue to raise the bar every year.”

The Buccaneers turned the corner during their time in the Atlantic Sun, as ETSU posted the program’s most wins since 1982 follow its 36 win campaigns in 2011 and 2013. During their time in the A-Sun (2006-2014), the Buccaneers ETSU represented itself very well, playing in the conference tournament championship game in the inaugural season. This marked the first time in the history of the ETSU that a baseball team had played in a conference tournament championship. The Bucs also made it to the A-Sun semifinals in 2009 and 2010, before winning the title in 2013.

In 2014, the Blue and Gold moved back to the Southern Conference, where ETSU will compete for a conference championship for years to come.

Each year Coach Skole sets two major goals for the Buccaneer baseball program: 1) To develop quality young men who will come through the program and leave prepared to be successful for the remainder of their lives; and 2) To continue to make the ascent to be one of the premier baseball programs in the Southern Conference and in the country.

“These two goals represent a great deal of hard work, development and commitment,” says Skole. “We understand that baseball will end one day for each of our players, whether they play professionally or not. We hope our program is a training ground to build a strong character and help them succeed in ‘life after baseball’. Qualities like personal accountability, sacrifice, work ethic, and a commitment to family are some of the things I hope our players gain while at ETSU. The second goal is obviously only obtained by producing a championship-caliber team, which encompasses the three major areas of coaching, recruiting and scheduling.

“I am very proud of the young men currently in our program and the young men that have come through our program. They are special individuals and they all are earning their degree. Not only are they outstanding athletes, but they are even better young men. We hold our baseball players to a very high standard here at ETSU and all of them must live up to it every single day. Our players are expected to succeed in the classroom, be involved in community service, and conduct themselves like gentlemen at all times. There is a huge responsibility that comes with being a student athlete at the Division I level, and we want to make sure our players are accepting of this responsibility.”

In 2005, Skole coached a school-record six Buccaneers to all-conference honors. In addition to 2004 Southern Conference Player of the Year, catcher Caleb Moore, 2006 seniors Shane Byrne, Blake Church, Jeremy Hall and Chuck Hargis were all named to the team.

Seven of his former players at LMU were taken in the Major League Baseball draft. Two of those players, Scot Shields and Brad Voyles (both right-handed pitchers), made it up to the big leagues for their first time during the 2001 season. Shields played for the Anaheim Angels and pitched in and won a World Series Championship in 2002. He was considered one of the top relief pitchers in Major League Baseball during the last decade. Voyles was with the Kansas City Royals. Skole led his LMU team to a 95-57 (.630) record in three years. His squads were ranked as high as 13th in the country. Before becoming head coach Skole served as an assistant coach at LMU from 1992-1996.

Skole graduated from The Citadel in 1991 where he established himself as one of the most popular athletes in the school’s history. In October of 2011, Skole was recognized for his accomplishments at The Citadel as he was enshrined into The Citadel Athletic Hall of Fame. Skole enjoyed a career on both the baseball diamond and football gridiron. In baseball, Skole helped guide the Bulldogs to two Southern Conference Championships, an Atlantic Regional Championship, and a berth in the 1990 College World Series in Omaha, Nebraska. It was Skole’s home run versus the University of Miami in the Atlantic Regional Championship game which propelled The Citadel into the College World Series.

Skole’s good fortune followed him to Omaha as he had the game-winning hit in the 12th inning to defeat Cal State Fullerton in The Citadel’s second-round victory. Skole ranked at or near the top in numerous all-time statistical categories when his career ended. During his football career, Skole started in 35 consecutive games and helped guide The Citadel twice to the NCAA I-AA national playoffs. In 1990, Skole led the Southern Conference in interceptions and in his senior year was selected Team Captain by his teammates.

Coach Skole enjoys reading, running, golf and spending time with his family. He and his wife Jody have been married for 17 years and recently completed the Atlanta Marathon together. They along with their three boys, Tilo (17) Jack (13) and Gehrig (9) reside in Johnson City.