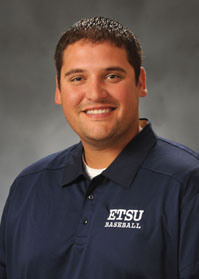 Chris Gordon begins his second season with ETSU baseball and his first as the Buccaneer pitching coach in 2015.

Gordon spent the five seasons as an assistant coach at Milligan before Coach Skole named him an assistant coach in the summer of 2013. This past summer, Gordon was named ETSU pitching coach after Coach Bunn took over the same position at Indiana.

"I couldn't be more excited to join East Tennessee State University and Coach Skole’s staff,” Gordon said. “Coaching at Milligan the last few years, I've been able to watch the program from the outside, and have always had a lot of respect for coach Skole and the university. I would like to thank Mark Fox and Nathan Meade for giving me an opportunity at Milligan, my alma mater, and it will always have a special place in my heart. I'm excited to get to work with and learn from great coaches and hopefully be a part of another championship season."

“I am very excited to add Chris Gordon to our coaching staff,” said Skole. “Chris has tremendous passion for baseball and the coaching profession. Our coaching staff has great energy and enthusiasm, and Chris will be a great fit. I know Chris will work tirelessly to help our players achieve their goals and I have no doubt he will be a huge asset to our program and our campus community. Chris is an outstanding young coach with a bright future, but he is an even better young man. We are glad to have him in our baseball family.”

During his time at Milligan, Gordon was in charge of recruiting, coaching the pitchers and catchers, strength and conditioning and academics. In his first four seasons with the Buffs, Gordon coached nine all-conference players, while his first recruiting class saw a pair of players selected in the MLB Draft. In 2010, Gordon led a pitching staff which ranked in the top 10 nationally in seven statistical categories – ninth in earned runs allowed, 11th in ERA, 12th in hits allowed, 18th in walks allowed, and 23rd in opponent batting average. Along with the nine all-conference standouts, Gordon also saw his players receive top honors such as AAC Freshman of the Year, NAIA Honorable Mention All-American, and the National Gold Glove.

Gordon also spent time coaching in the Alaskan Baseball League as he was the pitching coach for the Mat-Su Miners in 2011 and head coach in 2012. In 2011, the Miners’ pitching staff led the league in ERA, opponent batting average, and strikeouts, while six of those players are currently playing professionally. Last year, Gordon saw Ian Miller – who was taken in the 14th round by the Seattle Mariners – set the single-season league record in stolen bases with 39, while former ETSU All-American and current LA Dodger farmhand Clinton Freeman led the ABL in batting average and VCU’s Bill Cullen finished second in home runs.

In 2008, Gordon began his coaching career by being tabbed an assistant at Science Hill. The Hilltoppers went 35-7 and reached the semifinals of the state tournament. While at Science Hill, Gordon also coached Daniel Norris who was a second round draft pick by the Toronto Blue Jays in 2011.

In total, Gordon has coached 30 players who have either been drafted or signed into professional baseball.

Gordon played collegiately at Milligan from 2003-07 and received a Bachelor’s of Arts degree in history. While with the Buffs, Gordon was a member of the record-setting 2004 team and the 2005 NAIA Region XII runner-up squad.