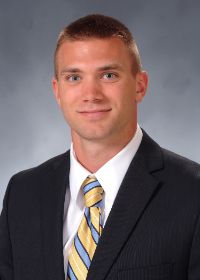 Lucas – who was ETSU’s volunteer assistant in 2016 – will coach the hitters, outfielders and base runners.

“I am very excited to add Zach to our staff in a full-time capacity,” said Skole. “He is a rising superstar in our profession and has one of the top young minds in college baseball.  I’m especially excited for our players, as they will be blessed to be around Coach Lucas on a daily basis.  Zach is a tireless worker – who brings a great amount of energy to our program every day – but also has a calming demeanor that allows him to relate well with our players. Last season Coach Lucas played a big part in us having one of the top offensive teams in the country.”

Lucas is excited to be given the opportunity to coach the sport he has such passion for.

“I am humbled and thrilled that Coach Skole has given me this opportunity,” said Lucas. “I gained the upmost respect for Coach Skole and the Buccaneer baseball program last year as a volunteer assistant. I’m excited that I can continue working with our great players and helping ETSU win a Southern Conference Championship.”

In 2016, Lucas assisted with the Buccaneer outfielders and offense, and his work paid huge dividends for the ball club. As a team, the Blue and Gold ranked fifth in the country in home runs per game (1.32), seventh in home runs (75), 21st in batting average (.307), 15th scoring (7.5) and 25th in runs (430). Defensively, the Buccaneer outfield committed only five errors.

Lucas was a four-year letterwinner for head coach Dan McDonnell at Louisville from 2011-2015. Lucas played in 206 career games (184 starts) and helped guide the Cardinals to two appearances in the College World Series. The Louisville native was a two-time team captain (2014 and 2015) and earned third team All-American honors in 2014. Lucas was drafted in the 27th round by the Pittsburgh Pirates in 2014, while he also earned the Jimmy Corraro Award – which is given to a Louisville player who exemplifies strong character both on and off the field.