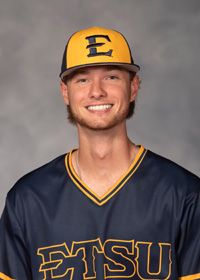 2020 (Senior)*: Started in all 15 games, all at first base…Reached base in all 15 games and ended the season on a six-game hit streak…Had a .311 batting average with 19 hits in 61 at-bats…Recorded six multi-hit games...Tallied a season-high three RBI vs Toledo (2/15)…Hit nine extra-base hits including three triples…Concluded the season with
12 runs scored and seven RBI…Ranked 13th in the nation with .20 triples per game and was tied for the SoCon lead with three triples in the season.

Prior to ETSU: Transferred to ETSU from Cleveland State Community College after two seasons as an infielder … Recorded 72 hits in a breakout 2018 season, ranking fifth in the Tennessee Community College Athletic Association (TCCAA) … Finished last season batting .346 with a pair of homers, 32 RBI, 45 runs and eight stolen bases … Was named a 2018 Academic All-American.