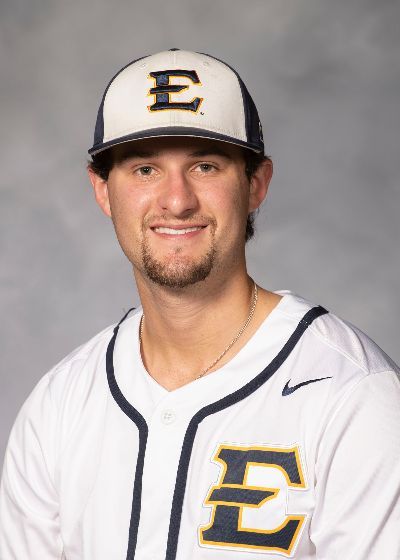 2020 (Junior)*: Logged one start and played in six games with one run scored… Held a perfect fielding percentage with four put outs, three assists and no errors.

2019 (Sophomore): Appeared in 26 games with 18 starts as a corner infielder — filling in 14 times at first base and four at third base ... Batted .235 on the season with 16 hits in 68 at-bats, including three doubles and two homers ... Finished with 10 runs, three RBI and two stolen bases ... Smashed his first career home runs in back-to-back games, hitting his first collegiate bomb against Appalachian State in a 4-0 win before hitting a solo shot against Wofford two days later in a 7-1 victory ... Enjoyed a seven game hit streak from April 12 - April 26, raising his average from .179 to .286 in that span ... Fielded .986 with 124 putouts, 14 assists with two errors.

2018 (Freshman): Appeared in 30 games with 18 starts at third base for ETSU as a true freshman ... Batted .164 with 10 hits for the Bucs, but made the most of his at-bats with 10 RBI and six runs ... Earned his first career hit in his first collegiate game versus Northern Kentucky with a bunt single to load the bases, setting up a big inning in which he scored his first career run to lead ETSU to a season-opening 6-2 win ... Hit his first multi-base hit in his hometown of Knoxville vs. Tennessee, doubling home two runs in ETSU's signature 10-9 win over the Vols.

Prior to ETSU: Played at Knoxville Catholic High School for head coach Caleb Moore, a former All-American for the Bucs who holds ETSU's single-season school records for doubles and batting average ... Kearney primarily started at the hot corner for the Irish and was ranked as the third best third baseman in the state of Tennessee by Perfect Game.