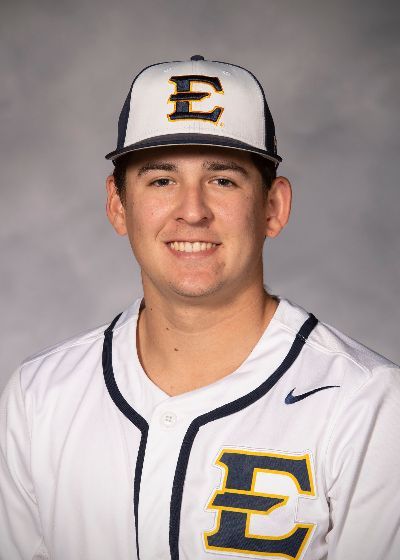 2021 (Senior): Mercer made 13 appearances for the Blue and Gold, all out of the bullpen…He held a 6.16 ERA with a 1-4 record… In 19 innings of work, Mercer struck out 18 and allowed 13 earned runs, while opposing hitters were hitting .321 against the righty reliever… Mercer made seven shutout appearances for ETSU in 2021, picking up his lone victory of the season in ETSU’s 10-5 win over Appalachian State on May 11.

2020 (Junior)*: Made four appearances, all out of the bullpen and held a 2-0 record…Tossed three perfect innings with five strikeouts to record his first win of the season against Rider (2/23)…Struck out 12 batters and allowed just one walk in 8.2 innings of work…Concluded the season with a 4.15 ERA with four earned runs…Tallied at least one strikeout in all four appearances.

2019 (Sophomore): Appeared in 21 games with one start, making the second most relief appearances on the team ... Finished with a 1-2 record and a 4.80 ERA in 30.0 innings ... Tied for second on the team with three saves on the season, shutting the door in back-to-back wins against Western Carolina in a conference sweep and against No. 5 Furman during the 2019 Southern Conference tournament in Greenville, S.C. ... Won in his first appearance of the season vs. Iona on Feb. 16 with three scoreless innings in a 14-3 win ... Threw a combined 7.2 scoreless innings over four games to open the season while recording 11 strikeouts in that span ... Struck out 36 batters with only nine walks ... Limited hitters to a .241 average.

2018 (Freshman): Appeared in five games for ETSU as a true freshman while making his first collegiate start vs. Northern Kentucky in the season-opening series ... Recorded five strikeouts against the Norse in 3.0 innings of work in a no-decision ... Allowed no hits but one run in 2.0 innings of relief at Florida Gulf Coast in Fort Myers, Fla.