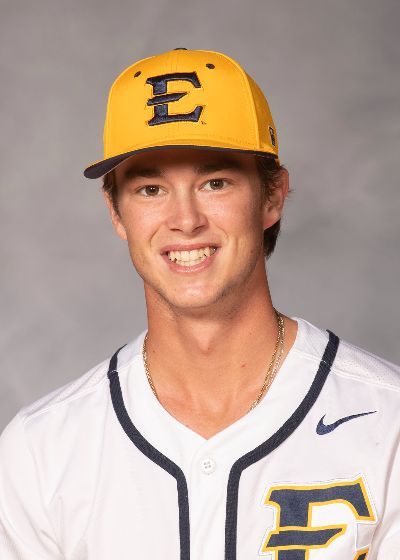 2022 (Junior): Appeared and started in 48 games, all at shortstop...Hit .293 with 61 hits, 44 runs scored, 36 RBIs, 22 doubles, two triples and seven home runs while drawing 19 walks...King's 22 doubles led the team and are T-5th all-time for doubles in a season...King's 14 doubles in conference play led the league, batting .326 as well...Tied teammate Tommy Barth for the most two-hit games on the season (16) as King was third on the team in multi-hit games (21)...After the first weekend series, King had three multi-hit games and six runs scored...Recorded a season-high four RBIs twice, once against UNC Asheville (3/13) and once against George Washington (3/27)...Scored four runs for the first time in his career against George Washington (3/27), including his first two-homerun game...In that same game, King hit a home run on the first pitch he saw and the last pitch, walking off against the Colonials in ten innings for his first career walk off...Had five games with at least two doubles...Ended the season on his second nine-game hit-streak during 2022...Named Second-Team All-Conference (Coaches & Media).

2021 (Sophomore): King was the lone Buccaneer to play and start in all 49 games in 2021…Making all 49 starts at shortstop, King hit .282 with a .339 on-base percentage and was third on the team with a .465 slugging percentage… The Knoxville, Tenn. native led the team with 17 doubles and 57 hits… He was second on the squad with 35 runs scored and was third with 34 RBI… The sophomore infielder led the Blue and Gold with 17 multi-hit games and was third with nine multi-RBI games…Set a career high with two doubles at Mercer (4/30)… He began the season reaching base in 21 straight contests. He set a career high with four RBI in the season opener vs Northern Kentucky (Feb. 20), tallied four three-hit games, and became the first Buccaneer since 2017 to lead off the game with a home run (at Mercer on April 30). Named to SoCon All-Freshman Team.

2020 (Freshman)*: Played in 10 games and made eight starts in his freshman year…Tallied first career hit vs Toledo (2/15)…Finished a single shy of the cycle with his first two career home runs and recorded career-high five RBIs vs Georgia State (3/1)... Concluded the season with a .226 batting average, nine RBI, four walks and six runs scored…Had 13 put outs and 23 assists for a .958 fielding percentage.

Personal: Born on June 2, 2001…Graduated from Farragut High School in Knoxville, Tenn. where he was a 2019 state champion…in his senior year, King hit .407 with 21 extra base hits including nine homeruns...MaxPreps listed Farragut as the top team in the state of Tennessee and top-10 in the nation…son of Craig and Heather King…majoring in sport management.