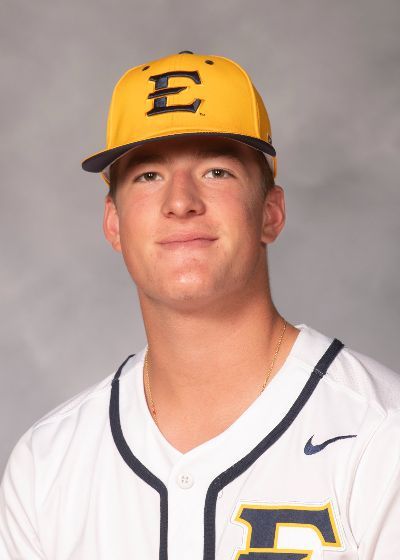 2022 (Freshman): Had one of the most memorable freshman seasons by a Buccaneer...Appeared in 48 games with 47 starts, 45 of those coming in right field and the other two in left...Hit .369 with 72 hits, 44 runs scored and 38 RBIs, adding 16 doubles, four triples and six home runs...Led ETSU in batting, on-base percentage, walks, hits, and triples...Barth's .369 average ranked third in the conference (at the end of the regular season) and third amongst all Division I freshman...First collegiate hit was a three-RBI triple against Northern Kentucky (2/18)...Put up his first-career four-hit game against Baylor (4/2), notching two doubles and a home run...Recorded his first-career walk-off, an RBI-single to solidify his second four-hit game against VMI (4/22)...Boasted three of the team's five four-hit games...Tied Cam Norgren with 22 multi-hit games, and tied Ashton King with a team-high 16 two-hit games...Placed second on the team in multi-RBI games (11)...Barth's 35 hits in conference play ranked second in the league...Carried a 22-game hit streak that spanned over a month, the longest hitting streak by a freshman in program history, which started in the four-hit game against Baylor...Held a 25-game on-base streak during that stretch...Led all Division I freshman over a period of three weeks during his 22-game hit streak...ETSU's first freshman since 2008 to boast a batting average above .350 and lead the team in that category (Paul Hoilman)...ETSU's first freshman since 2009 to record at least 70 hits in a season (Bo Reeder)...ETSU's second-ever Freshman of the Year award and sixth individual conference award, the first since 2013...SoCon Freshman of the Year (Coaches & Media)...Named First-Team All Conference (Coaches & Media)...SoCon All Freshman Team.

Prior to ETSU: Graduated from Brecksville-Broadview Heights High School in Brecksville, Ohio....First Team All-State senior year...Ranked as the No. 6 outfielder in the state of Ohio according to Perfect Game...Player of the Year in his conference following his senior year of high school...Played for Release Baseball in summer 2021 that had six players on Division I rosters including three at Ohio State.