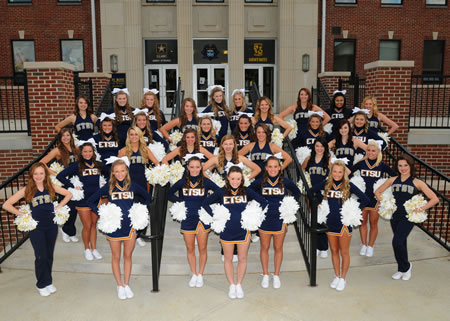 ETSU Cheerleaders competed in the Cheersport Nationals in Atlanta, Georgia on February 18-19, 2012. They competed in the preliminary competition on Saturday, placing third behind UNC All-Girl team and University of Georgia All-Girl competition team, with North Carolina State and Michigan State following. On Sunday, our cheerleaders performed in the finals and scored high enough to bounce into second-place, behind North Carolina, with University of Georgia falling behind into third-place. North Carolina State remained in fourth, while Michigan State finished fifth. Go Bucs!!!

The ETSU Cheerleaders won top honors at the 2010 UCA College Cheerleading Camp in Knoxville, TN last summer. The cheerleaders performed flawless routines in both Sideline and Fight Song categories where they won 1st place. They won 2nd place in the Cheer performance. For the 4th year in a row, they have received the most "coveted" award which is the Most Collegiate Award. This award is given to the team that best represents college cheerleading at its best and who represents their university in a positive manner.

The ETSU Dance Team attended UDA camp this past summer 2010, they received numerous Superior ribbons for individual performances and a Superior trophy for overall performance. They also were awarded 1st place on their home routine and a superior trophy for Fight Song. The UDA staff selected the ETSU Dance Team to receive the prestigious Collegiate award for exemplifying the best in college dance in technique, style, talent, character, and representing their university in a positive manner. Few other teams were as decorated as the ETSU Dance Team. Selected team members were asked to join the UDA staff for 2011. Congratulations!