The massive “Mini-Dome” – which was once the home of ETSU football and now serves as the team’s indoor practice facility – also acts as the home of ETSU’s track and field program, while also housing the administrative offices for ETSU Athletics. 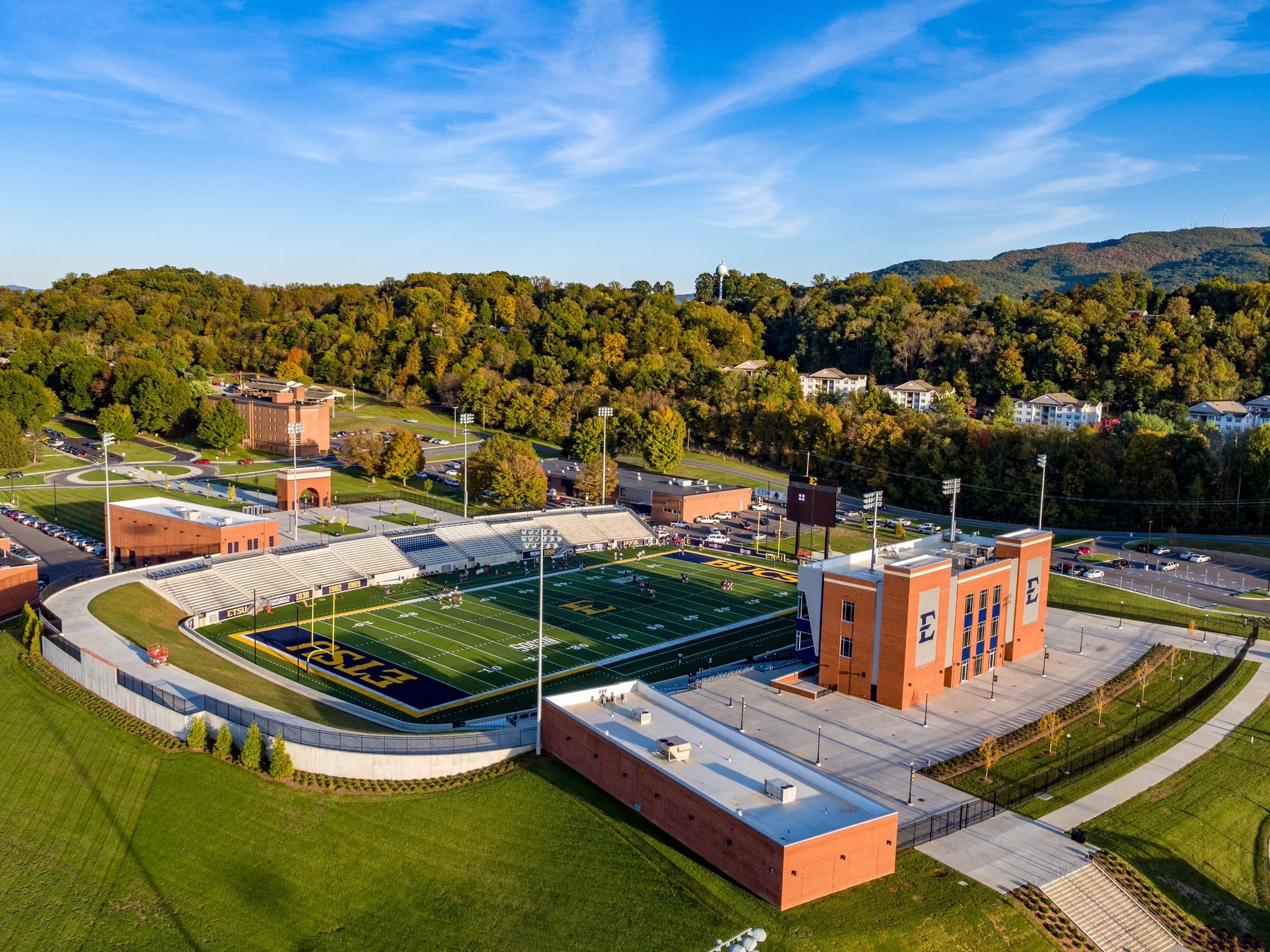 In the Fall of 2017, East Tennessee State University began playing football on campus for the first time since November 22, 2003. William B. Greene, Jr. Stadium, the Home for Buccaneer Football, is a classic horseshoe designed stadium nestled at the foot of Buffalo Mountain in the campus' southwest corner. 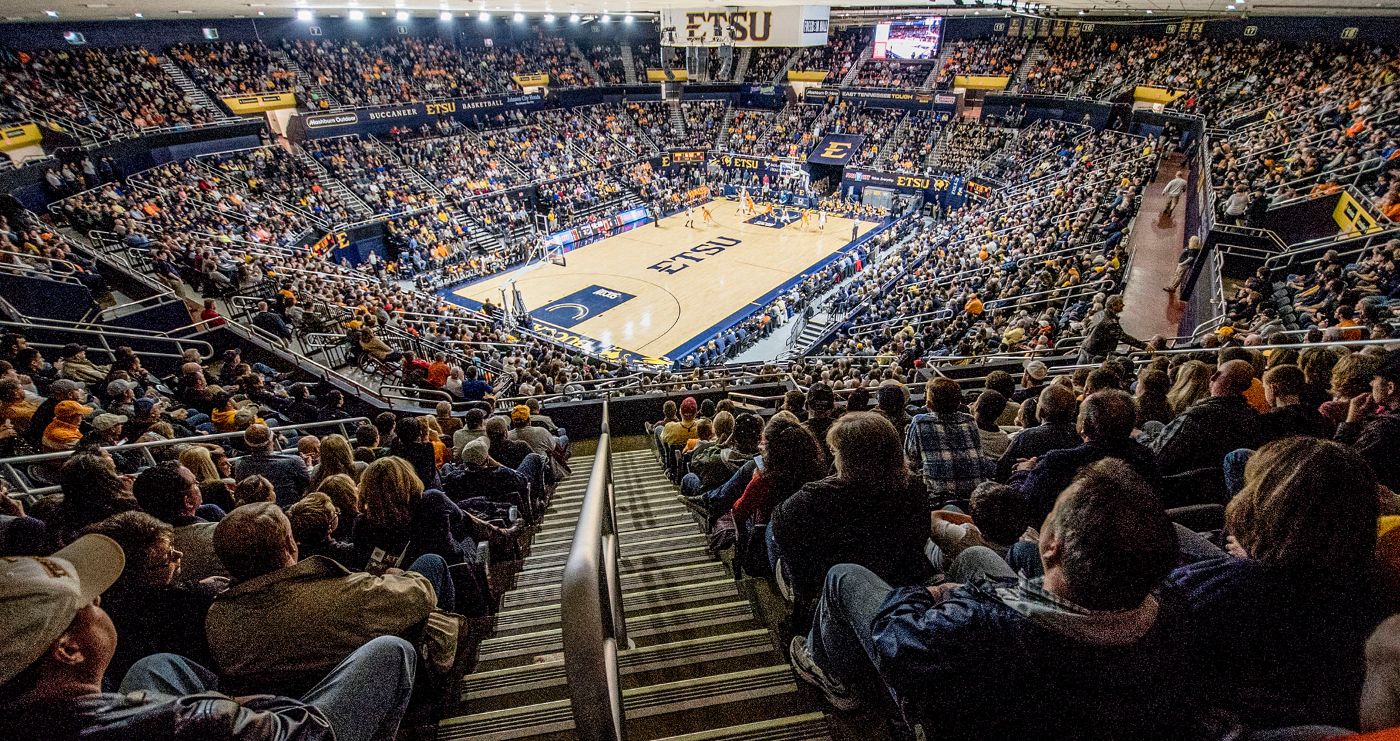 Freedom Hall Civic Center became the new, fulltime home of ETSU men’s basketball in 2014. The 6,000 seat concert venue incorporates program and sponsor signage throughout the season and also plays host to numerous entertainment events throughout the calendar year. Owned by the city of Johnson City, ETSU has entered a long-term agreement to make Freedom Hall the Bucs’ home for years to come. 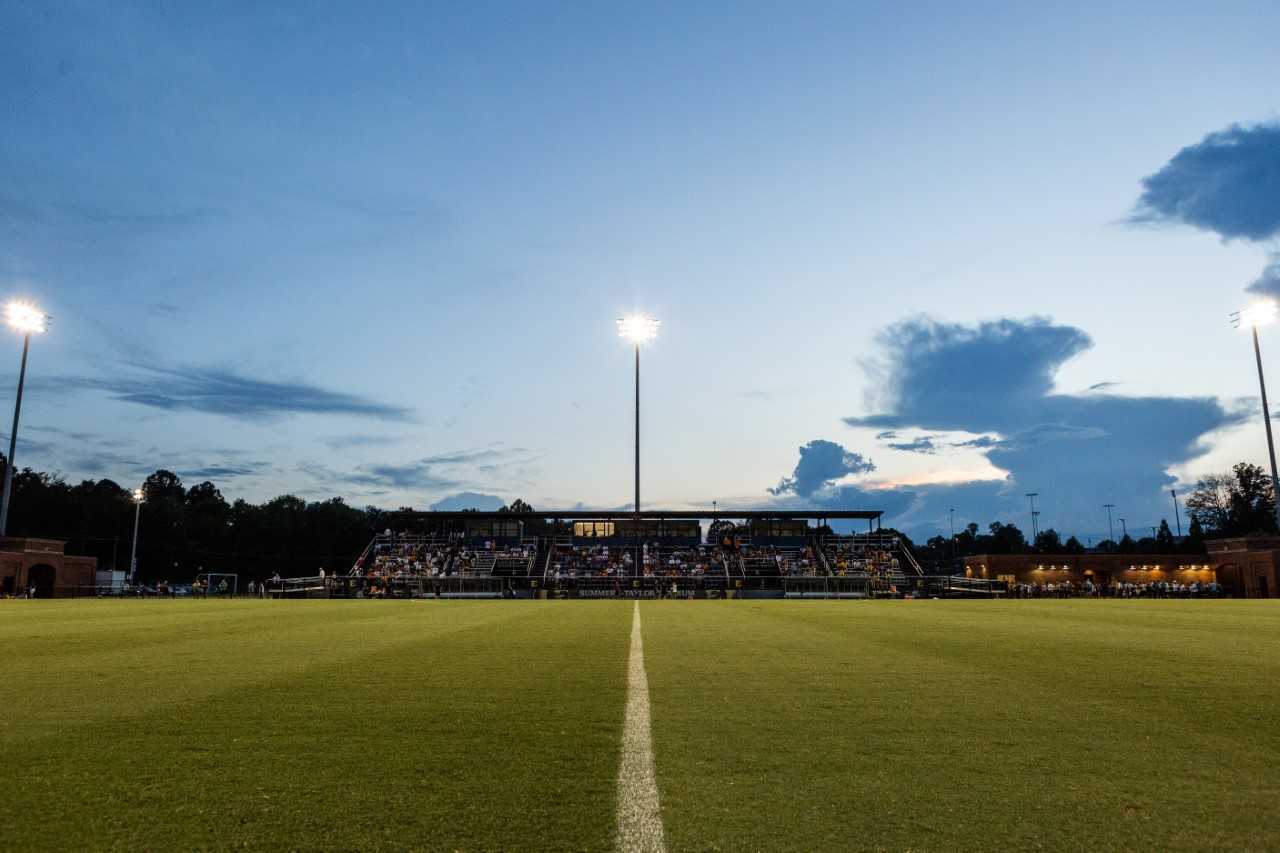 Summers-Taylor Stadium was completed in 2008 and is one of the premier soccer facilities in the nation. The west side grandstand hold over 1,000 fans, with hillside seating to the east of the field pushing capacity to over 2,000.  The stadium features television-quality lighting, spacious concession and restroom facilities, press box and hospitality suites, a loge seating area, and state-of-the-art scoreboard, video board, and public address systems. It is home to both the men’s and women’s soccer programs.

Betty Basler Field was completed for the 2009 season and is the first on-campus home of the ETSU Softball program. The 500+ seat stadium features one of the most picturesque views in all of college softball, with the Blue Ridge Mountains and Cherokee National Forest as its natural backdrop. The facility itself also boasts a large digital scoreboard, gated concourse, bathrooms, concessions, and a natural playing surface with a state-of-the-art LEED certified drainage and irrigation system. The complex also houses an on-site practice infield and batting cages.

Thomas Stadium, the new home of ETSU baseball, opened in February of 2013. The 1,000-seat stadium features picnic-style hillside seating along the baselines, a state-of-the art Daktronics LED video board, TV-quality lighting, modern concessions and restroom facilities, and a FieldTurf™ playing surface. Unique to the Thomas Stadium experience is the University Edge student condominiums, with apartment balconies that overlook left field and the Blue Ridge Railroad which borders the right field fence. 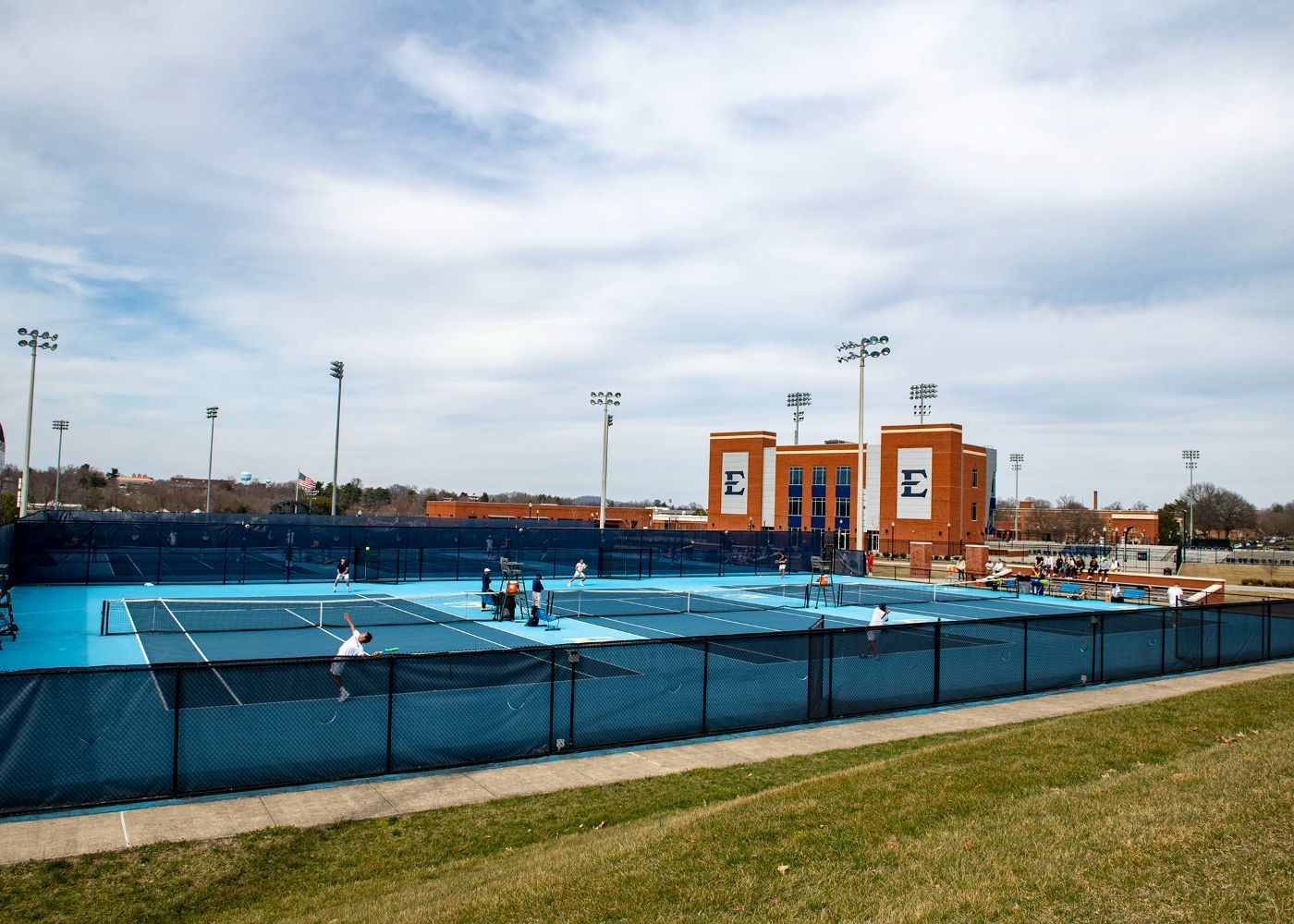 The Dave Mullins Tennis Complex, located just south of Summers-Taylor Stadium, opened in 2013 and serves as the outdoor competition and practices venue for ETSU’s men’s and women’s tennis programs. The complex is named after Dave Mullins who coached men’s and women’s tennis at ETSU from 1987-2002, winning a combined 11 Southern Conference regular season and tournament titles and leading the Buccaneers to two NCAA Tournament trips (1992 and 2002). 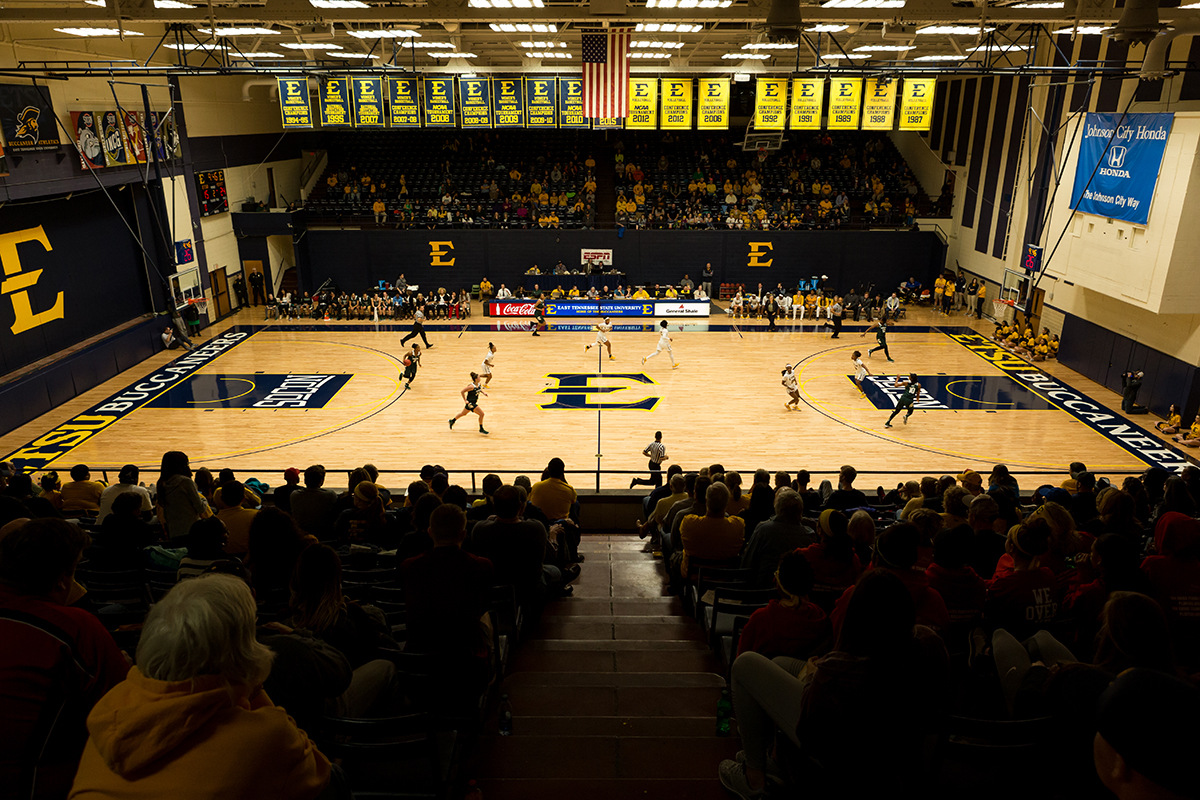 Storied J. Madison Brooks Gymnasium was completed in 1950. Home to both the ETSU women’s basketball and volleyball programs, Brooks Gym has undergone two extensive renovations in the past decade. The initial renovation involved upgrades to locker rooms and a complete revitalization of the seating bowl, including new paint and scoreboards, refurbished seats, and the installation of a new heating and air conditioning system. A recent renovation in 2014 added a new-look playing surface, modern basketball goals and various aesthetic upgrades throughout the facility.

Located inside the ETSU/MSHA Mini-Dome, the David E. Walker Track -- named for the legendary Bucs coach and player -- has hosted countless meets including the annual Niswonger Invitational, one of the largest indoor meets in the nation; plus the Atlantic Sun and Southern Conference Indoor Championships, AAU Championships, and the NAIA National Championships.

The Humphreys Center is the core of academic success for ETSU’s student-athletes. Since its completion in 2003, ETSU’s academic markers such as GPA, retention, and graduation rates have consistently improved and now rank among the leaders in the nation. The center houses over 30 computer work stations, private study areas, a Smartboard™ computerized conference room setup, and offices for ETSU’s staff of academic advisors/counselors. 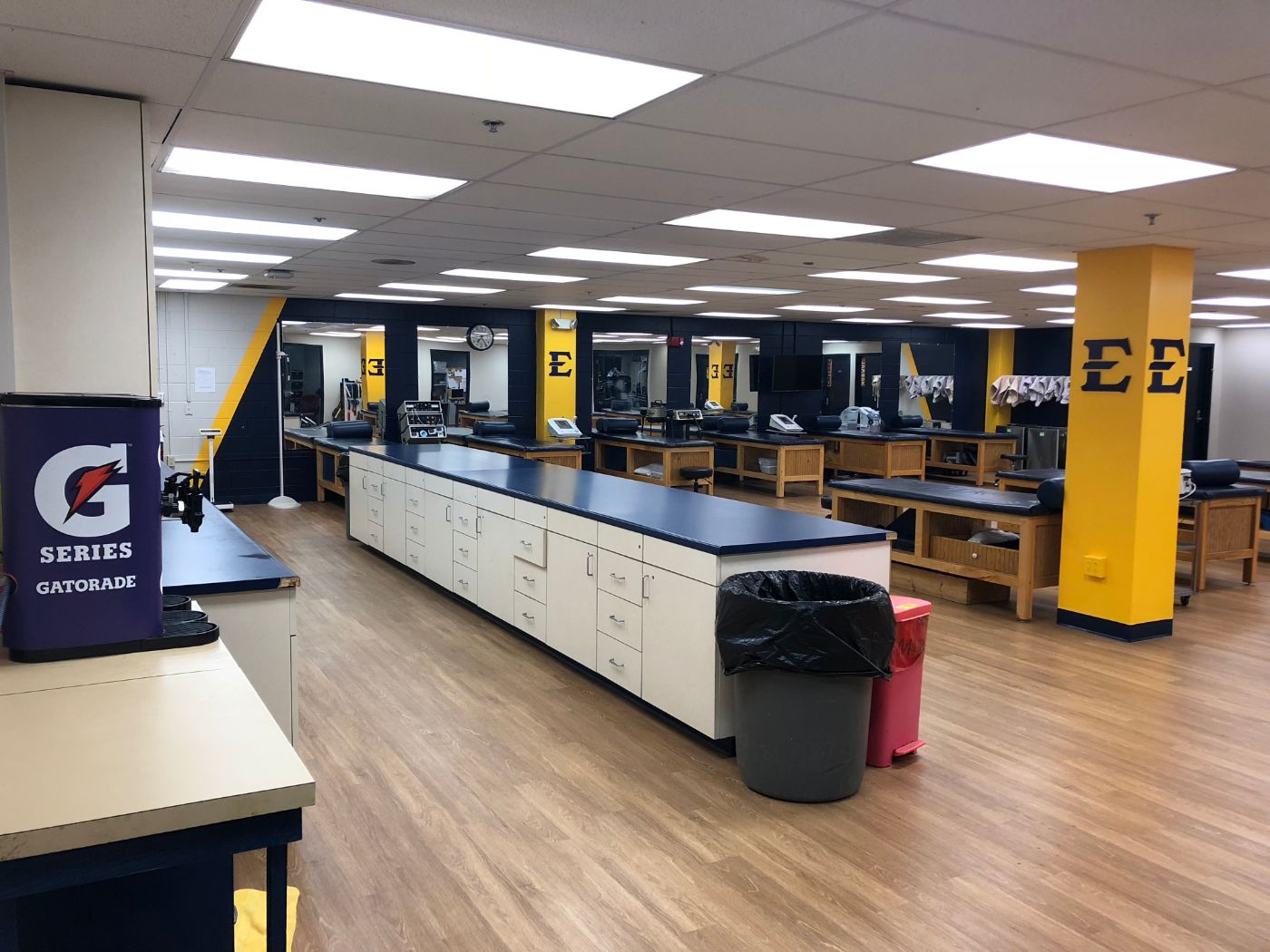 The Jerry Robertson Athletic Medicine Center, also known as BucSports, is a multi-disciplinary clinic offering services to ETSU Student-Athletes and referrals from doctors with the general public. The 7,500 square-foot facility provides prevention, diagnosis, treatment, and rehabilitation for a variety of injuries. BucSports is a fully functional orthopedic clinic and features on site x-ray, aquatic therapy tanks, custom orthotic fabrication, and on-site bracing and assistive device services.

ETSU student-athletes spend many hours training to reach their peak potential on the field of play. Many of those hours are spent here in the weight room. The ETSU weight room located on the first floor of the Mountain States Health Alliance Athletics Center. 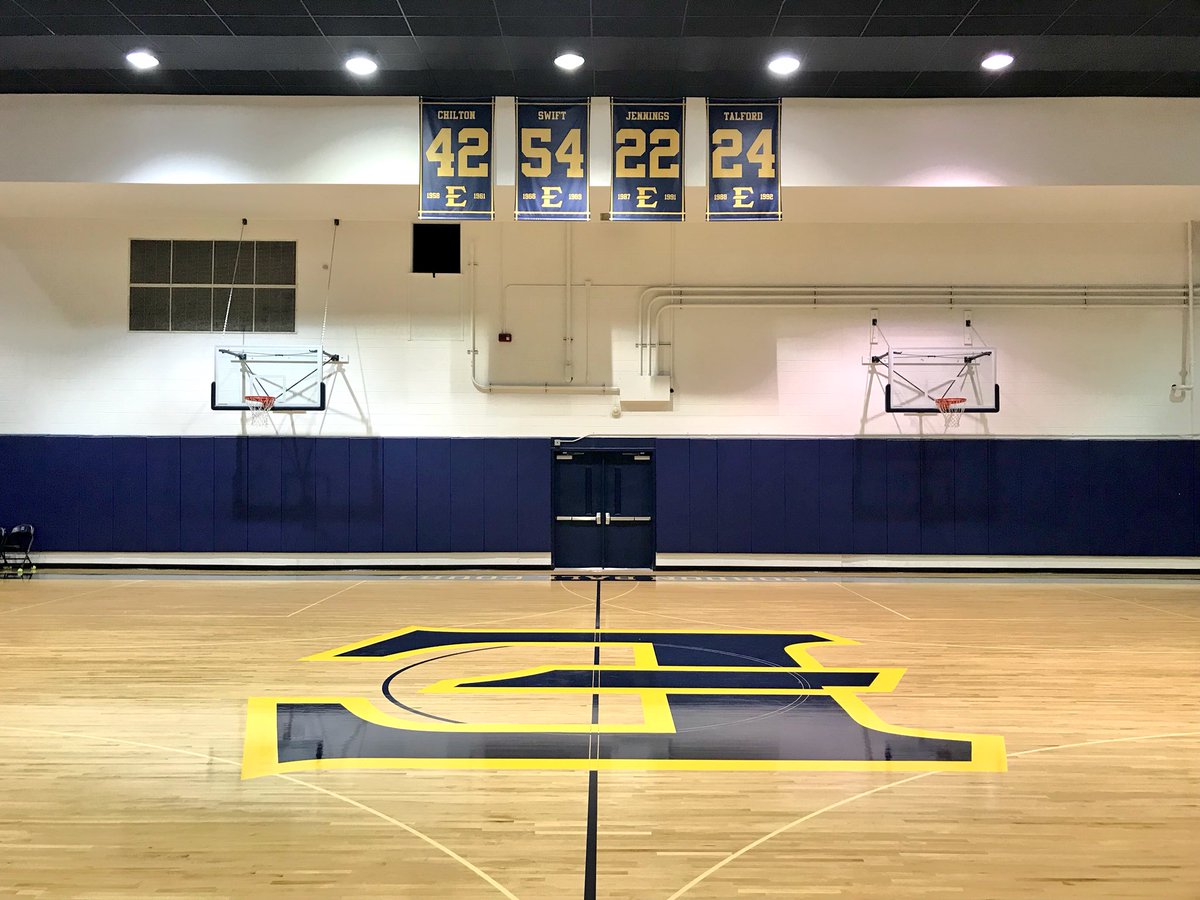 Housed inside the ETSU/MSHA Mini-Dome, the Gordon Ball Practice Facility is an indoor basketball gym that provides the men's basketball team an additional space on campus to practice.