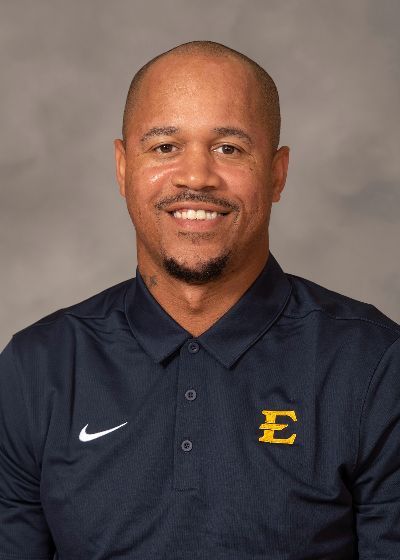 Making his way back to Johnson City is Chris Grimes, taking over the role of defensive backs coach prior to the start of the 2022 season.

Grimes comes to Johnson City after enjoying a two-year stint at his alma mater, Tennessee Tech. While at Tech, Grimes served as the nickels coach in addition to acting as the special teams coordinator and running backs coach. During the 2021 season, Grimes coached David Gist to a spot on the All-OVC team after rushing for a team-best 901 yards and eight touchdowns.

Before his stop with the Golden Eagles, Grimes was on staff at Gardner-Webb from 2016-19, including serving as the defensive coordinator for the Runnin’ Bulldogs in his final two years in Boiling Springs, N.C.

Grimes, no stranger to Johnson City, coached at ETSU in 2015 in what was the first season back for the Bucs after a 12-year hiatus. Grimes led the safeties, including Austin Jackson and Cole West who each recorded more than 30 tackles on the year.

Grimes began his coaching journey in 2010 with his first stop in Cookeville, Tenn. where he was a graduate assistant coach before transitioning to a full-time coach in 2012.

A 2008 Tennessee Tech graduate, Grimes became a fixture on the field for the Golden Eagles during his five-year playing career, playing in 39 contests and starting in 16. He chalked up 158 total tackles including 101 solo tackles from his cornerback spot. In addition to his tackles, he also recovered seven fumbles during his career, caused two fumbles and broke up 16 passes. He had three career interceptions and finished with eight tackles-for-loss.

During his prep days, he was a two-way player for coach Don Thomas at LaVergne High School, starting at tailback and free safety. He rushed for 3,650 yards and finished his prep career with 231 tackles for the Wolverines.

Grimes first graduated from Tech in 2008 with a degree in multidisciplinary studies and received his master’s degree in 2012.