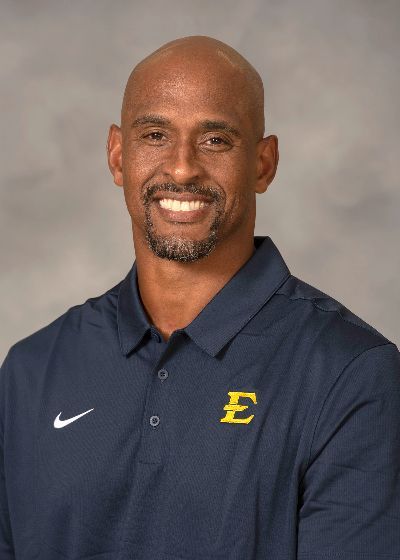 Former N.C. State running back and NFL veteran Gary Downs was announced as the Buccaneers’ running backs coach on March, 4, 2015. Downs concluded his seventh season with the Blue and Gold, including his fifth season as the recruiting coordinator, following the 2021 fall season.

The 2021 season was one for the record books, due in large part to the running back duo of Quay Holmes and Jacob Saylors. Under Downs’ guidance, the duo each eclipsed 1,000 yards rushing, the first duo to do so in a single season in ETSU history. In fact, the duo broke numerous records this fall.

Holmes, the most decorated football player in ETSU history, set the school record for: single-season rushing yards (1,553), all-time rushing yards (4,264), career attempts (798), single-season rushing touchdowns (17), career rushing touchdowns (45), single-season 100-yard games (8), career 100-yard games (19), most points in a single season (120) and in a career (306), most total touchdowns in a single season (20) and a career (51). Holmes also earned six All-American honors this fall and was named the SoCon Offensive Player of the Year. Holmes is also in the top three finalist for the coveted Walter Payton Award.

Saylors broke Holmes’ single-game rushing record when he rushed for 266 yards and three touchdowns in a win over Western Carolina. Saylors now ranks fourth all-time in career rushing yards at ETSU with 2,544 and holds the best rushing average in program history with 6.6 yards per run. Saylors’ 1,019 yards on the ground this season ranks 8th all-time, while his 10 rushing touchdowns sits sixth. In addition, Saylors earned his first two All-American honors of his career this fall.

In seven years as the running backs coach, Downs has overseen tremendous success in the ground game. In just the six games in the spring 2021 season, the Bucs rushed for 896 yards. In 2019, ETSU ran for 2,062 yards which marked the then-ninth-most yards in a single season in program history and the first time since 1999 that the Bucs eclipsed 2,000 rushing yards. The Bucs rushed for 4.85 yards per attempt in 2019, the most in a single season in school history, up until the 2021 fall season.

Prior to the Holmes/Saylors era, the Bucs were led by Jajuan Stinson and Falon Lee from 2015-17. Stinson totaled a team-high 1,451 rushing yards (4.5 yards per carry) and 13 touchdowns during the three-year stretch. Stinson ranked ninth in the SoCon in rushing in 2016, while he registered five 100-yard rushing games between 2015 and 2016. Meanwhile, Lee posted 851 rushing yards with two touchdowns in his three seasons with the Blue and Gold.

Downs has seen 12 running backs account for 80 total touchdowns in his six seasons, including 51 touchdowns from Holmes.

As a unit, the Bucs have eclipsed 200 yards rushing in 22 games since Downs took over as the running backs coach. ETSU is 18-4 in those games. In the 56-35 win over the Catamounts, the Bucs rushed for 461 yards, the most rushing yards in a game since the return of football. The 461tally included 478 combined yards from Holmes and Saylors.

Downs has coached a total of nine all-conference honorees and has coached Holmes to being named the SoCon Freshman of the Year and Offensive Player of the Year. Downs has also coached 14 All-American winners, including witnessing Holmes and Saylor combine for eight in 2021.