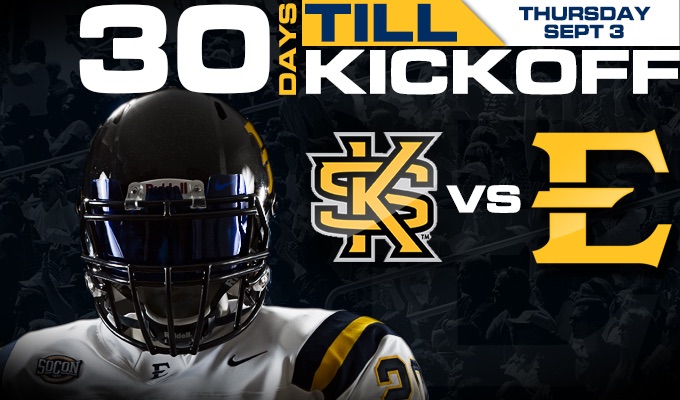 For the ETSU football program, today stands as another major date in the “Countdown to Kickoff,” as the Buccaneers are now just 30 days removed from playing their first game at home against Kennesaw State on Sept. 3, 2015.

To mark today’s significance the ETSU Department of Intercollegiate Athletics is releasing information on the Bucs’ preseason practice schedule and various ways to follow the Blue and Gold on social media. In addition, the “Buck for the Bucs” promotion is in full swing and the fan vote for ETSU’s uniform combination for its home opener is still open.

The ETSU football team opens preseason practice this Thursday, August 6, on the fields located next to the ETSU Center for Physical Activity. The Bucs will practice from 3:30-6 p.m.

ETSU begins preparations leading up to its season opener against Kennesaw State on Sept. 3, as the Bucs will also hold scrimmages on Aug. 15 and 19.

“We are excited to start practice on Thursday,” said head coach Carl Torbush. “We have a lot of work to do between now and our season opener on September 3, but the coaching staff and players are eager to hit the ground running. It’s hard to believe we are only 30 days away from opening the season.”

Primarily practices will be held daily from 3:30-6 p.m., at the CPA practice fields. Please follow @ETSUFootball on Twitter for updates regarding practice changes.

Fans, follow ETSU football all season long on social media and via ETSUBucs.com. Below are the social media outlets to get your latest news on Buccaneer football…

“BUCK FOR THE BUCS” CAMPAIGN

The “Buck for the Bucs” campaign is underway!

ETSU has partnered with Roadrunner Markets and Dunkin’ Donuts throughout locations in the East Tennessee region to launch the promotion during the entire month of August.

Throughout the month of August, customers at select locations have the opportunity to participate in the “Buck for the Bucs” promotion and show their support of ETSU Athletics. Those who make a donation receive an ETSU football schedule, along with getting their name displayed on the wall at that specific store location.

The ETSU Department of Intercollegiate Athletics is inviting its fans to decide on the Buccaneers’ uniform combination for the 2015 home opener. Fans have several ways to submit their vote. Below are the voting options:

The winning uniform combination will be announced when fall classes resume later this month.