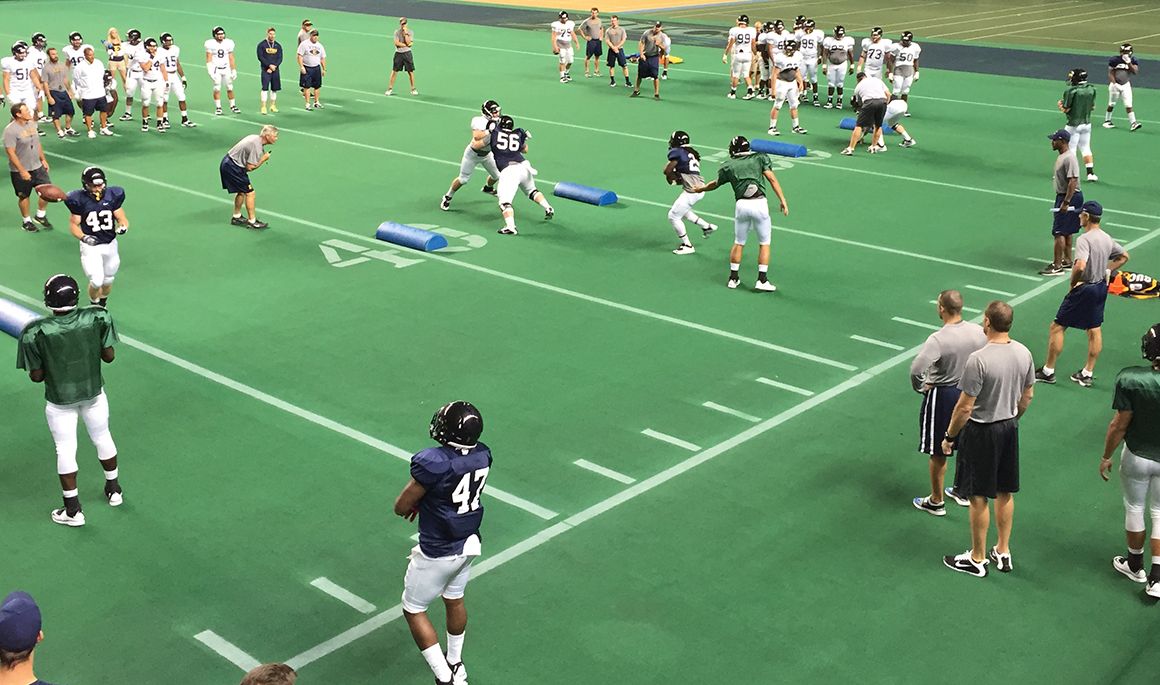 JOHNSON CITY, Tenn. (Aug. 11, 2015) – Despite heavy thunderstorms and lightning hovering around the Tri-Cities region, the ETSU football team was still able to get its work in as the Buccaneers held practice inside the MSHA Athletic Center on Tuesday afternoon.

The Bucs, who wrapped up their sixth preseason practice, continued to work hard, and offensive coordinator/quarterbacks coach Mike O’Cain liked what he saw from the offense.

“Today was probably the best day we’ve had,” said O’Cain. “We’ve thrown a lot at them over the last six days, but we are finally putting some things together. We didn’t install much today, so the guys had a chance to review a little bit.”

Coach O'Cain has also be pleased with the progress from quarterbacks Austin Herink (Cleveland, Tenn.) and Nick Sexton (Seymour, Tenn.).

“I’ve been very pleased with both of them,” added O’Cain. “They have retained a lot from the spring and last fall. Nick has been through it a year already and Austin has been with us for one semester, but I’ve been very pleased with the mental part of their game. Physically they have to get better. Today was their best day throwing the football; so every day they seem to get a little bit better.”

When it comes to this Saturday’s scrimmage, the offensive plays are already in and the Bucs will use the next few days to review and get better.

“Most of everything we are going to do in the scrimmage is already in,” O’Cain said. “These next few days will be used to review the plays. We have a few special situation plays that we will work on tomorrow and Thursday, but now it’s getting everything we’ve worked on in place and getting to know it better.”

The Blue and Gold return to practice on Wednesday at 3:30 p.m., on the outdoor practice fields near the CPA. Stay tuned to Twitter for any schedule changes.