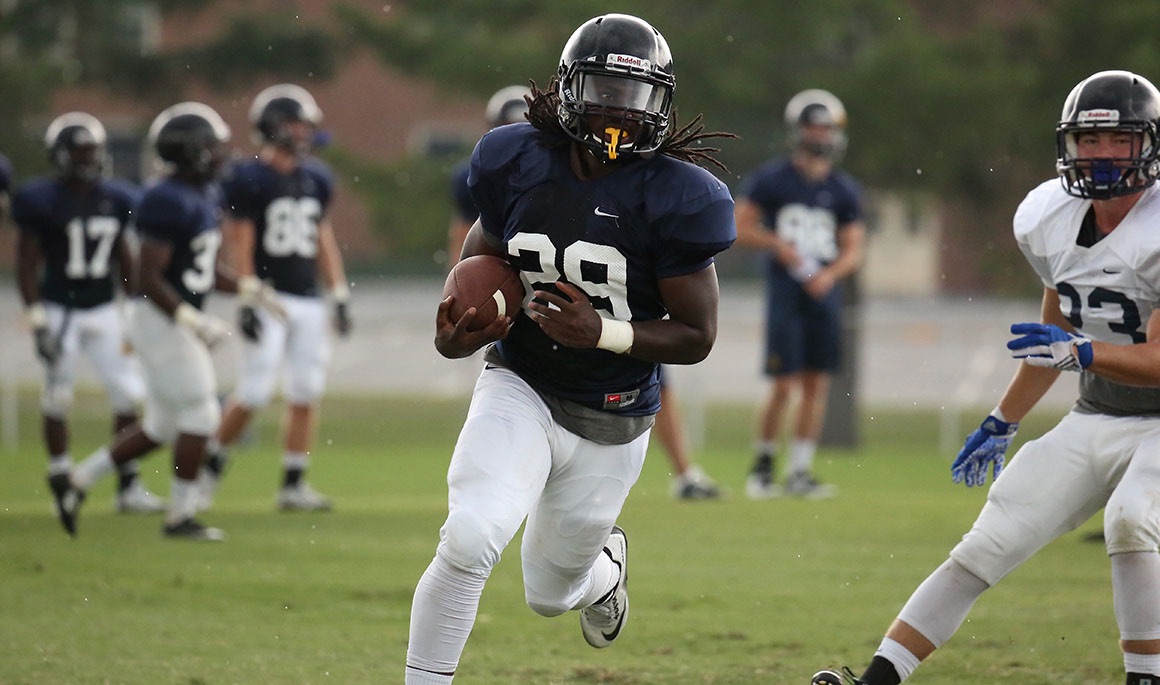 A look back at Wednesday night’s scrimmage

JOHNSON CITY, Tenn. (Aug. 20, 2015) – Coming off its second preseason scrimmage, the ETSU football team returned to practice on Thursday outside on the CPA practice fields.

The Bucs, who scrimmaged in the rain Wednesday night at Kermit Tipton Stadium, held an 18-period practice in helmets and shoulder pads on Thursday afternoon.

At the conclusion of practice, head coach Carl Torbush talked about the scrimmage.

“I thought last night’s scrimmage went well. We worked on a lot of different things,” said Torbush, whose Buccaneers host Kennesaw State on Sept. 3 at 7:30 p.m. “The weather has played a factor in both scrimmages, but we may deal with the elements in a real game, so it has been good to face those situations. I thought our players did a great job of dealing with the elements.

“Overall, I was pleased with a lot of things we worked on. JJ Jerman made a 50-yard field goal early on in the scrimmage and the defense had a couple of interceptions – including one by River Boruff. I also thought our running backs ran well. Artevius Smith showed a lot of quickness, while Jajuan Stinson and Falon Lee came through with big plays last night. The running game was probably the best it’s been this preseason. We still have a long way to go, but we had a lot of positives last night.”

The running backs accounted for two touchdowns, while Falon Lee (Macclenny, Fla.), Jajuan Stinson (Knoxville, Tenn.) and Artevius Smith (Birmingham, Ala.) combined for 85 yards on 15 rushes. Lee recorded eight rushes for 35 yards and one touchdown, while Smith ran for 21 yards and also found the end zone.

All five of ETSU’s quarterbacks saw action in the scrimmage with Austin Herink (Cleveland, Tenn.) going 6-for-12 with 77 yards. Jovany Aris (Delray Beach, Fla.) and Hunter Wike (Canton, N.C.) were two of eight different receivers to register a catch. Aris and Wike led the group with two catches each.

On Friday, the Blue and Gold will hold another shortened practice in helmets and shorts, beginning at 9 a.m.