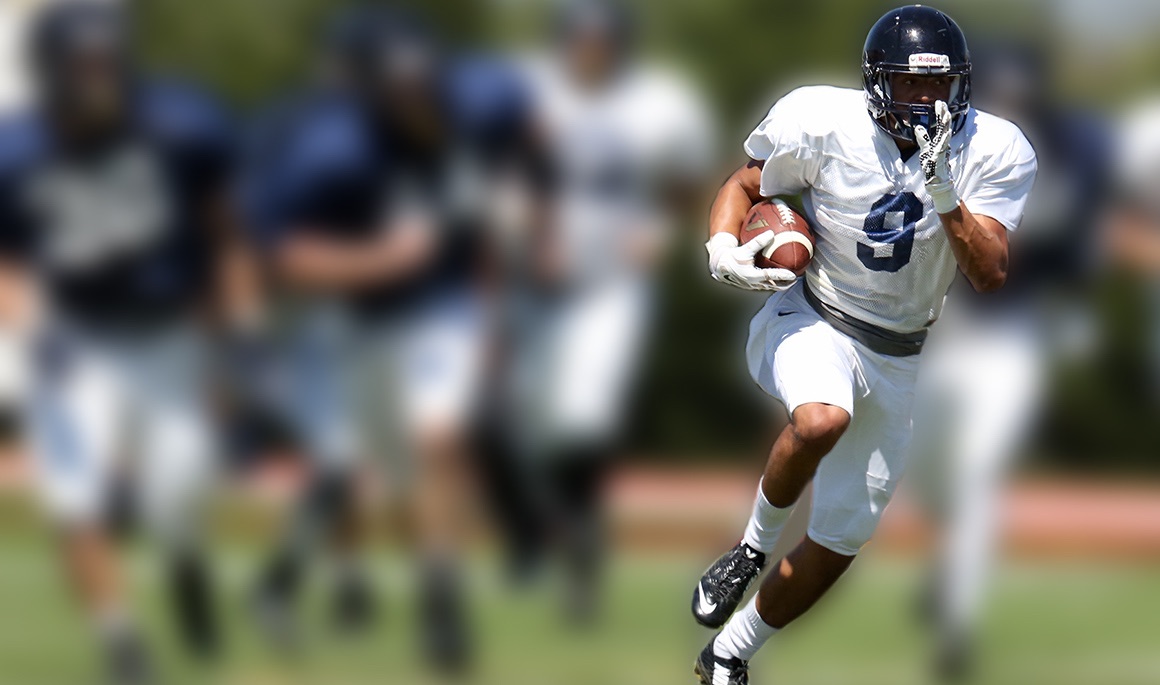 The ETSU Department of Intercollegiate Athletics announced in July that it partnered with VIP SEEN, Inc., to produce a special preseason football magazine called Game Time, which is now available for purchase at the ETSU Bookstore, as well as local Roadrunner Market and Food City locations.

Below is a feature story on ETSU freshman wide receiver Drake Powell (Clinton, Tenn.), which can also be found in the Game Time magazine.

The average speed of a bullet is approximately 1,700 miles per hour.

ETSU freshman receiver Drake Powell should know – he likes to spend his free time at the shooting range – and for fans in and around the ETSU football program, the hope is that Powell can blow by opponents at the same rate this season.

He may not be as fast as a speeding bullet or NFL rookie phenom Odell Beckham Jr., but Powell has quickly emerged as a player to watch in the upcoming inaugural season of Buccaneer football.

Despite the early attention because of his individual skills, Powell’s concerns are not about his own statistics or accolades.

“Obviously we want to win every single game,” Powell said. “We go out there to win.“

The Clinton, Tenn., native was recruited by the Bucs to play wide receiver, a position in which Powell thrived for Clinton High School. In his senior season he was tabbed first team All-State after setting school records for receptions and yards in a single season.

Powell came to the ETSU program with both personal and external expectations, and after eye-opening performances in the Bucs’ handful of scrimmages so far, it is not too soon to say he has met those expectations.

Powell had 11 receptions for 214 yards and two touchdowns over the course of four scrimmages during the fall, an average of 19.4 yards per catch.

His big-play ability is apparent and not surprising when one asks Powell about the players who have influenced how he plays the game.

“I like Odell Beckham Jr., I like the way he plays,” Powell said. “I love how Calvin Johnson goes up to get the ball, but my favorite receiver would have to be Andre Johnson.”

The Andre Johnson comparison goes beyond the style of play. Powell has the physical build of an NFL wide receiver.

At 6-foot-2, Powell possesses long arms and huge hands for someone his height, and the 20 pounds of muscle he gained over the winter months has him up to 205 pounds. That extra size and strength will prove beneficial if he is to be the go-to receiver that wants to be this season.

Powell said he trusts the ETSU coaching staff to make the right moves when the Bucs take the field this fall.

“We have the best coach we could get, Coach (Mike) O’Cain is an offensive mind freak,” Powell said. “He puts us in the right position to score or get a first down, so I think we can be potent.”

Although football has taken him to the collegiate level, Powell admits that basketball was his first love, and he still enjoys playing numerous different sports. In his down time between football, Powell likes to hang out with his family, go on hikes and make the occasional trip to the shooting range.

Majoring in criminal justice and having aspirations of being a FBI or Secret Service agent one day may project a serious tone to Powell, but he likes to joke around and be silly, especially around his teammates.

“My teammates say I can sing and dance, but I don’t see it,” Powell said. “I just do it to be funny.”

Yet, it is not all fun and games, and Powell knows the importance of this comeback season for the ETSU football program and the surrounding community.

“The main goal is to make a statement,” Powell said. “We want people to see that ETSU football is back.”