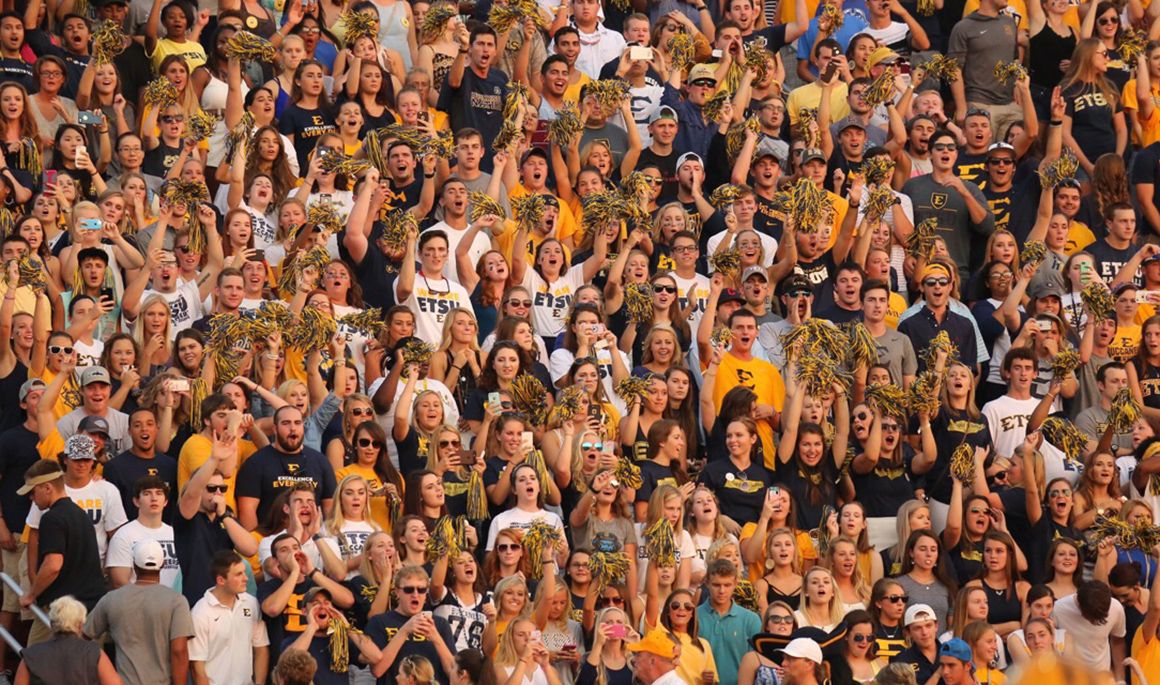 JOHNSON, CITY, Tenn. (Sept. 3, 2015) – With a capacity crowd of 8,217 in attendance, East Tennessee State football ended a 12-year absence with an emotional return to the gridiron Thursday night at Kermit Tipton Stadium.

Unfortunately for the Buccaneers, the final score did not reflect the triumphant nature of the evening.

The passionate and boisterous gathering of ETSU fans watched their young team play an inspired first half, only to see an avalanche of big plays in the second half lead to a 56-16 loss to Kennesaw State. The Owls (1-0) enjoyed a victory in the opening game of their inaugural season, while the Bucs (0-1) played for the first time since the 2003 season.

ETSU actually led the game 13-7 with 6:42 left before the intermission, but KSU finished the first half with 14 unanswered points. The Owls kept up the offensive onslaught and then outscored the Bucs 35-3 the rest of the way.

Kennesaw State finished with 416 rushing yards and outgained the Bucs 512 to 328 in total offense on the evening.

On a night of historic firsts, it was the Buccaneers who struck first on the scoreboard when JJ Jerman (Seymour, Tenn.) was true on a 36-yard field goal with 6:12 left in the first quarter to make it 3-0. Jerman went on to kick three field goals on the night, tying for the third-most field goals in ETSU single-game history..

The ensuing kickoff resulted in what appeared to be a touchdown return, but KSU was flagged for holding. Despite being brought back to the 16-yard line, the Owls put together a 14 play drive that totaled 84 yards and ended with a 6-yard scoring run by quarterback Trey White to make it 7-3.

Another 31-yard field goal by Jerman moved it to 7-6, and on their next drive the Owls fumbled the snap on a punt attempt, setting up the Bucs on the 50-yard line. That ETSU drive finished with a 12-yard touchdown run by redshirt freshman Jajuan Stinson (Knoxville, Tenn.), making it 13-7 in favor of the Bucs with 6:42 left in the first half.

Unfortunately for the Bucs, the remainder of the half belonged to the Owls. First, White led a 54-yard drive that appeared to have ended when he fumbled at the 1-yard line, but KSU tailback Jae Bowen picked up the loose ball and rushed in for the score. Now trailing 14-13, the Bucs’ next possession ended with a disaster. Quarterback Nick Sexton (Seymour, Tenn.) attempted a screen pass from deep in ETSU territory which was intercepted by KSU defensive lineman Nick Perrotta and returned for a score, making it 21-13 at the break.

In the second half, KSU dominated from the kick, outscoring the Bucs 21-0 in the third quarter and 14-3 in the fourth quarter.

ETSU will return to action next Thursday night at home, hosting Maryville at 7:30 p.m. inside Kermit Tipton Stadium. Fans can learn more about ETSU football by visiting ETSUBucs.com and clicking on the football link.

Head Coach Carl Torbush Opening Statement
We’ve got a lot of things to work on, but I think everything we’ve got right now is correctable. Iwant them to be hurt; I want them to be frustrated. I want them to be angry about losing. We don’t want to take losing sitting down, but I think Kennesaw’s got a chance to be a pretty good football team. We have to figure out where we are and where we need to go, and if we do that I think we’ll be fine.

Torbush on next week
We have to look at the film, evaluate, find out what we did right and what we did wrong, correct it and put the best players at each position.

Torbush on players dealing with adversity
I thought our players did a good job on not letting the build up affect them. I think they bounced back well and were still in good spirits. We have a long way to go, but I saw some bright spots. There were enough bright spots that we are going to be a good football team in the future.

It’s a huge honor to get that first touchdown for the program. A lot of people are going to remember that moment for a long time.

Stinson on what team has learned from tonight’s game
We can improve all around on offense, defense, and special teams. We just have watch film, learn from this game and focus on next week.

Redshirt freshman linebacker Dylan Weigel on game atmosphere
Everyone was excited. All week on campus the students, the faculty, and the team were out showing their support. You could see it all around the stadium tonight.

Weigel on performance of team
We can take a lot away from this game. The main thing is that we have to play a 60-minute football game. In the first half we were firing on all cylinders offensively and defensively, and everybody was making plays.

Weigel on getting first game out of the way
It’s unfortunate we didn’t get the win, but as a team offensively, defensively and special teams we have to break down the film and learn from it.

Freshman kicker JJ Jerman on confidence after getting first points of the game
It takes a game to make your confidence stronger. Coming in here and having the opportunity to make the first field goal helped my confidence and the rest of the team know we can get points on the board.

Jerman on scoring first points for ETSU in 12 years
It’s exciting, but we wanted to win this game. I’ll look back on it later and realize it was big, but as long as it helps my team out that’s my job and hopefully I can continue doing that.

We had a lot of adversity early on but they battled through it. We had our defense with their backs against the wall early, and they kept fighting and fought through. We were able to move the ball. We were our own worst enemy at the beginning of the game. We talked at halftime about working on fixing those mistakes and I am very proud of the players and our staff as well.

On what he will remember most about this night

Just playing the game. It’s been a long time coming and it felt good to see the guys take the field tonight. These kids have put a lot of hard work in over the last two and half years, and for them to come out and have a positive night to build on.

Hugging everyone after the game. That’s what it’s all about; the players and to see their faces after all they have done. I can’t say enough about our staff and everybody involved in this program. I am proud of this program.

On getting first career win

This is a great feeling. Everything early on made me think it was going to be one of those nail-biters. It was good and we were prepared. We had a plan on every side of the ball. I was concerned about it being crazy early on, but everyone did their jobs well.

On what surprised you most about your team tonight

I was concerned about how they would handle the adversity. That’s why I was most proud at the beginning of the game. I was just proud they never waivered and they took care of business. I think defensively they did a pretty good job. The thing that got us was the screen and they busted that two or three times on us for big plays. Once we fixed it, the team did very well.

On the big play in the first quarter

We hit some adversity early on. It was all about team effort. Once we had the turnover early in the game, our defense really stepped up and held us. The special teams gave us great field position. It was a total team effort.

We had great fan support throughout this process and to share this with the fans and the community was special. I got chill bumps.

On his overall play

I just try to play ball. I had some great blocking; not only from our o-line but also our perimeter blocking was great tonight. In offense, you have to have an attack like that to spring big plays.

What are you going to take away from tonight?

When we hit adversity we just have to stick together like we did tonight to prevail. If we can do that and play with effort, attitude, and toughness, we will be okay. We are going to make mistakes, but if we can overcome those mistakes we can have a good season.