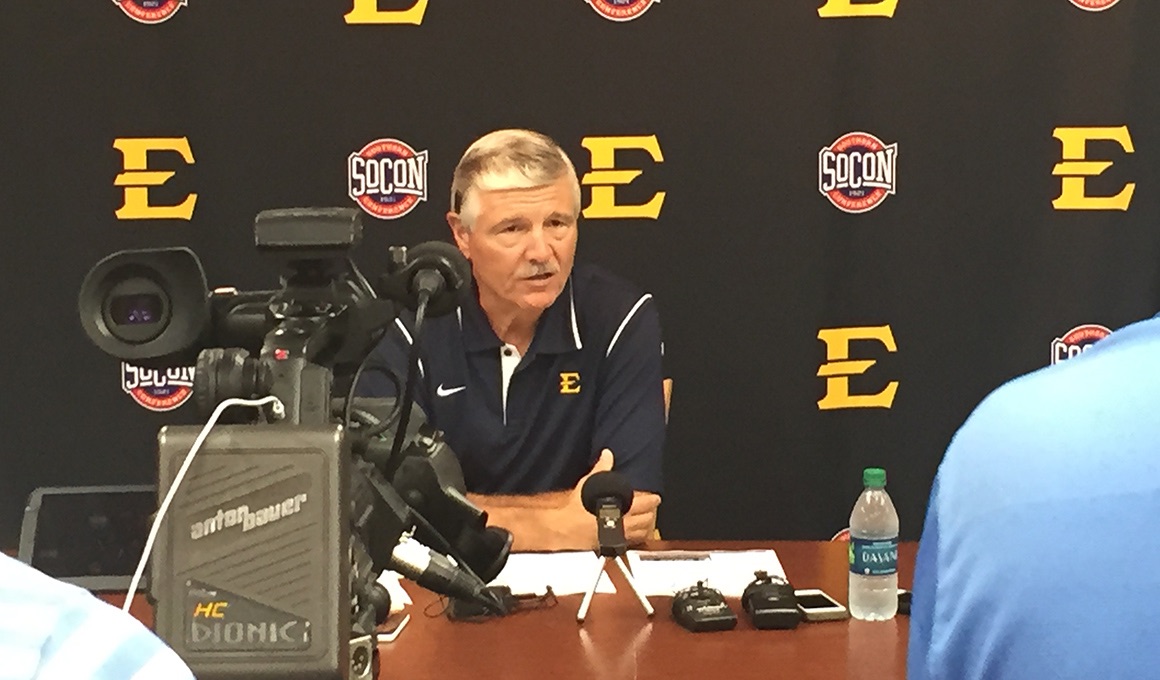 The Bucs return to action Thursday night when ETSU hosts Maryville at Kermit Tipton Stadium. Kickoff is set for 7:30 p.m.

Below are comments by Coach Torbush, Boruff, Stinson, Jerman and Powell.

ON COMMUNITY SUPPORT
I would like to say a big thank you to our fans for their support and the great crowd we had last Thursday night. It was a great night for ETSU and college football.

Things are not going to happen overnight. We want the fans to stay with us, be excited and let the young men know they are behind us. If the fans continue to do that, there is no doubt we will continue to get better each week.

ON LAST WEEK’S GAME VS. KENNESAW STATE
I didn’t think playing in front of that crowd exasperated our players and I thought they responded very well. They looked like they were well coached and knew what they needed to do – especially since our opening drive took nine minutes and we put points on the board (JJ Jerman field goal). I think that said a lot about the preparation our coaching staff and young men put in. There are things we can do better so we don’t repeat the same mistakes and give up easy points. We will continue to work on that and become a better football team.

PREPARING FOR THIS WEEK’S GAME AGAINST MARYVILLE
Maryville will be a tough test for us. They had a big win last week and scored a lot of points. They would like nothing more than to come up here and beat us. There are a lot of things going on this week, but the only thing we are concerned with is getting our first win. The most improvement is going to come from game one to game two, and this is the week we need to make a lot of improvement.

REDSHIRT FRESHMAN RUNNING BACK JAJUAN STINSON ON MARYVILLE
We’ve watched film on Maryville and we know they are a good team. They are going to compete with us.

STINSON ON THE ATMOSPHERE LAST THURSDAY AGAINST KENNESAW STATE
I didn’t have too many jitters. It was fun to play in front of the crowd. We took a whole year off and I believe everybody should have been ready to play.

REDSHIRT FRESHMAN LINEBACKER RIVER BORUFF ON MARYVILLE
They (Maryville) have had strong seasons over the years, so we have to come out and play hard from the beginning.

BORUFF ON ENVIRONMENT FROM FIRST GAME
We really appreciate the fan support. It feels good to see the support from the university and community. Fans keep telling us they are ready for game week and will be there supporting the program.

FRESHMAN WIDE RECEIVER DRAKE POWELL ON PLAYING THE FIRST GAME
It was fun to get out there for the first time in over year and play another team. I didn’t have a lot of jitters. I wanted to get out there and start playing.

FRESHMAN KICKER JJ JERMAN ON FIRST GAME
Being on the field with all of those people and then scoring the first points (of the game) was incredible. It feels good to get my confidence built up after one game and I’m looking forward to the rest of the season.