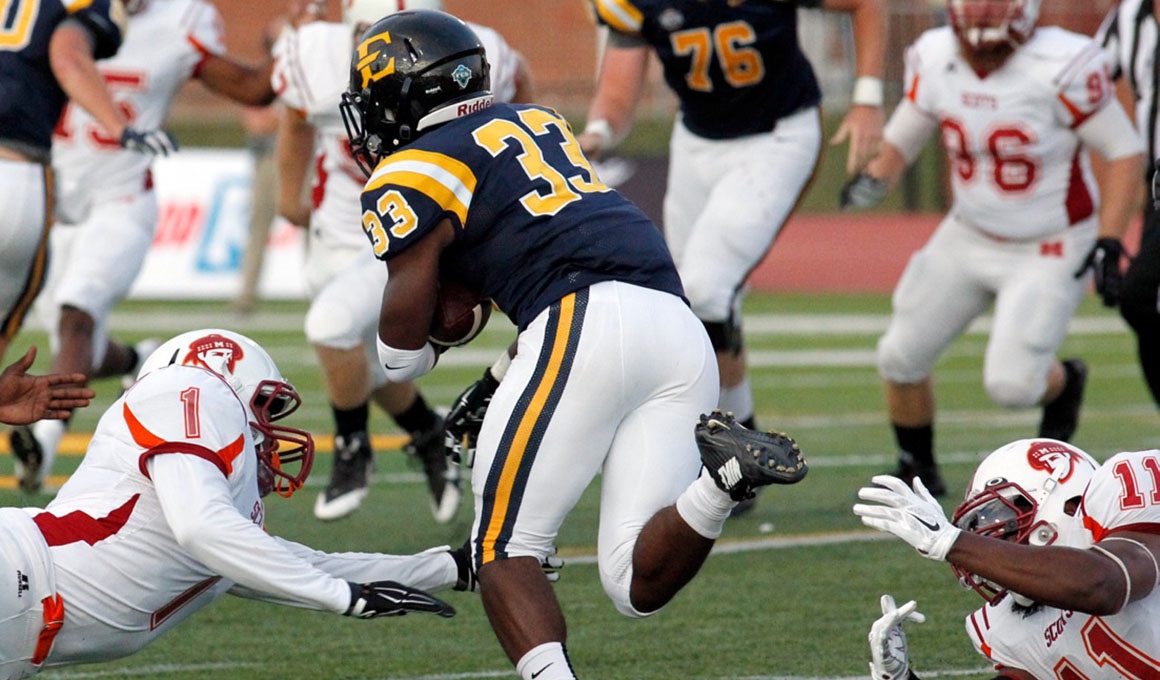 JOHNSON, CITY, Tenn. (Sept. 10, 2015) – A pair of fourth down plays did not end positively for the ETSU football team Thursday night as the Maryville Fighting Scots downed the Buccaneers 28-21 in front of 7,357 fans at Kermit Tipton Stadium.

The Bucs were held on downs at the Maryville goal line late in the third quarter with an opportunity to take the lead, and the Scots later stopped another fourth down attempt at their own 21-yard line as the Buccaneers were driving to tie the game. With the loss, ETSU drops to 0-2 on the season, while the Scots improve to 2-0 on the year.

While the Bucs outgained the Scots 416 to 353 in total offense, it was Maryville junior tailback Trenton Shuler who was a difference maker in the victory. Shuler finished with a team-best 107 yards rushing and scored twice – once on a 22-yard run and once on a 35-yard reception.

For the Bucs, redshirt freshman tailback Jajuan Stinson (Knoxville) again led the way on the ground with 114 yards rushing, while redshirt freshman quarterback Austin Herink (Cleveland) was 11-of-15 through the air for 78 yards. Herink also accounted for two scores with a 10-yard touchdown run and a 17-yard scoring pass to fellow freshman Demetrius Anthony (Fountain Inn, S.C.).

The game started auspiciously for the Bucs, as Stinson fumbled on the first possession of the contest, setting up Maryville at the ETSU 39-yard line. Just five plays later, Maryville collected the first score of the game on a 22-yard touchdown run by Shuler.

Trailing 7-0 just four minutes into the game, ETSU responded quickly, as Herink capped a 13-play, 77-yard drive with a bruising 10-yard touchdown run to tie the game at 7-7 with just over five minutes left in the half.

The Bucs kept the pressure on Maryville thanks to the defensive unit, as on the next possession cornerback Tavian Lott (D’lo, Miss.) picked off Maryville quarterback Evan Pittenger’s deep pass attempt. Herink and company then went to work again, as wide receiver Dalton Ponchillia (Nashville) sparked the ensuing drive with a 44-yard run, setting up a 17-yard touchdown pass from Herink to Anthony.

With the Bucs leading 14-7, Maryville answered to tie the game with a 15-play, 75-yard scoring drive that was capped by a 7-yard touchdown pass to tight end Ben Buell. On the ensuing possession, Maryville used an interception off Bucs’ quarterback Nick Sexton (Seymour) to start a drive that resulted in another touchdown pass from Pittenger to tight end Logan Winders and left the Scots leading 21-14 with just under 10 minutes left before halftime.

After trading possessions, the Bucs began their final drive of the first half with 2:22 left on the clock, and proceeded to run the two-minute drill to perfection, as Sexton used his scrambling skills and his right arm to lead the Bucs on an 11-play, 75-yard scoring drive that ended with a 20-yard scoring pass to Ponchillia, making it 21-21 at the break.

While the first half was a scoring fest, neither team managed points in the third quarter even though the Bucs did threaten a score midway through the frame. Moving the ball to the Maryville 1-yard line, the Bucs tried two straight running plays but were held out of the end zone by the Scots defense.

Maryville maintained the momentum early in the fourth quarter, as Pittenger found Shuler on a swing pass that the tailback took 35 yards for a score on third down to make it 28-21 in favor of the Scots with 9:39 left in the game.

On the next ETSU possession, the Bucs once again drove deep into Maryville territory only to be stopped by the Scots on another fourth down attempt at the 21-yard line. Taking over on downs, the Scots killed the final five plus minutes on the clock with multiple first downs, including a fourth-down conversion of their own with two minutes left in regulation that iced the game.

The Bucs will return to action next Thursday on the road at Big South Conference opponent Charleston Southern. Kickoff is set for 7 p.m. in Charleston, S.C.

For more on ETSU football throughout the season, visit ETSUBucs.com and click on the football link.

Firsts for the Bucs since 2003

Head coach Carl Torbush’s thoughts on 28-21 loss to Maryville
I thought we played a lot better in the second half, but we kept shooting ourselves in the foot. There was a lot of what ifs and those what ifs get you beat. Maryville made some key plays in the second half and you have to give them credit for that. We are not where we need to be, but we will continue to work hard and get better each day.

Coach Torbush on defensive effort
The defense played solid in the second half. We couldn’t get off the field on third down in the first half and that needs to happen.

Coach Torbush on team still learning
We can take a lot of positives away from tonight. The main thing we need to do is stay behind each other and continue to work. Nobody said this was going to be easy. I thought the effort was there but we need to make key plays at certain times.

Redshirt freshman Jajuan Stinson on getting 25 carries for 114 yards
It felt good to get that many carries. Our goal tonight was to pound the ball on the ground and we did that.

Stinson on the loss
It’s tough to lose to anybody. It doesn’t matter who we are playing. A loss is a loss.

Redshirt freshman Dylan Weigel on loss
It’s tough, but they are a good football team. They have had success over the past couple of years and it’s hard to beat age. We can’t really look at the wins and losses this season. We need to continue to learn and work hard, while stepping up and making plays at critical moments of the game.

Weigel on game performance of 11.5 tackles
I’m just out there doing my job. I’m trying to make reads, chase down the ball and put our offense in good field position.

Redshirt freshman Austin Herink on the loss
It definitely hurts to lose a close game like this, but it is a process. No one told us it would be easy. Obviously, this is a game we would have liked to win, but at the end of the day this is a process. You can’t judge success by wins and losses. We need to focus on getting better each game.

Herink on not getting touchdown with the ball on the two-yard line
We definitely wanted to punch it in, but I’m sure this week that is something we will work on in practice and hopefully the next time we are in the situation we can get the touchdown.