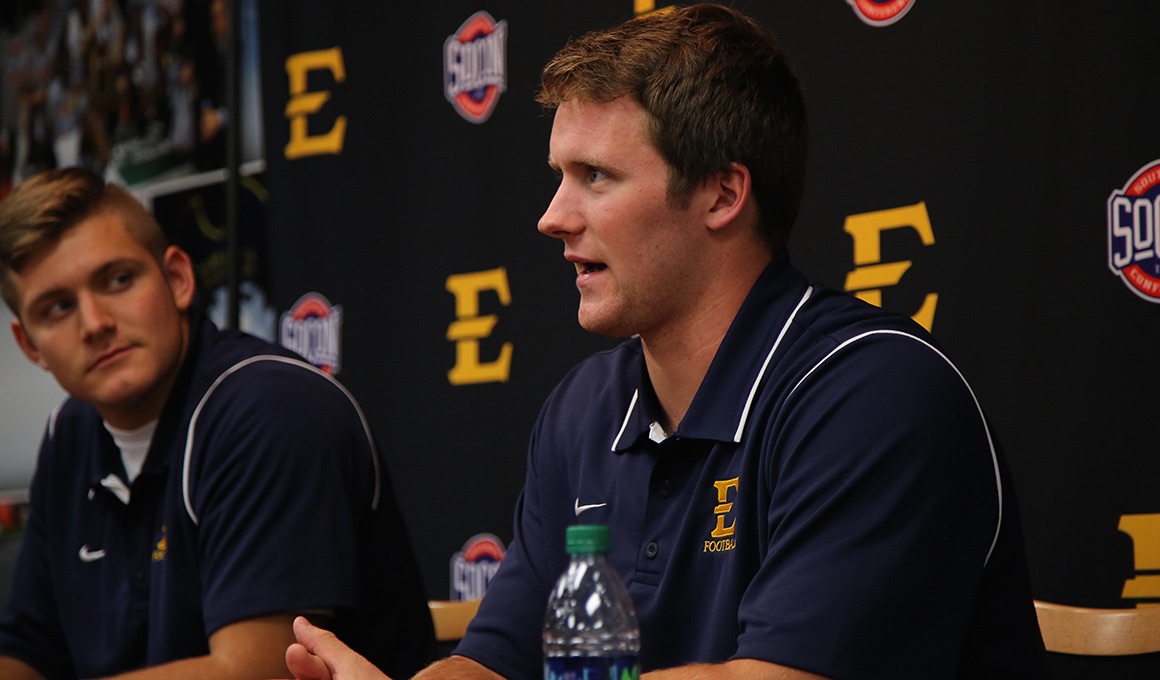 The Bucs return to action Thursday night when ETSU travels to Charleston Southern. Kickoff is set for 7 p.m., at Buccaneer Field.

Below are comments by Coach Torbush, Quillin and Herink.

Last week was a very disappointing loss. We had an opportunity to win the game, but didn’t make the plays we needed down the stretch. We had the chance to score from the one-yard line and didn’t execute. On our last offensive drive of the game, we could’ve kicked a field goal, but I thought it was best to go for it based on where were at on the field and the time on the game clock.

I think Maryville has a good football team. They are well-coached and will win a lot of football games. They performed well in a hostile environment and I commend them on their play.

We are sitting here at 0-2. No one said this was going to be easy. Our guys have their heads up and we are going in the right direction. We made a lot of improvement from game one to game two. Our players know what they need to do to get better as a football team.

We have a tough opponent this week in Charleston Southern. I don’t want to take anything away from our first two opponents, but Charleston Southern should be the best team we have faced so far this season. Not only that, but it will be the first time we are playing on the road in a tough environment. This game will help us get better. It’s a great challenge for our players as this is what we will see each week when we are in the SoCon next year.

Coach Chadwell is a former ETSU player and coach, and he has done a great job wherever he’s been. He has put Charleston Southern in the national rankings and they have another nice team this year. They got beat by Troy last week, but they were competitive. For them to go down there (to Troy) and play as well as they did says a lot of their team and coaching staff. They are a great running team and are deep at the running back position. They like to control the clock with their run game and run a lot of different options at their opponents. They also have a solid passing game as they use play action and throw down field. Defensively, they switch from 3-4 to 4-3 and also throw in a 3-3 stack. They didn’t blitz as much in week one, but they blitzed a lot more against Troy.

It was a great feeling. I saw the quarterback rolling out to the right and chased him down. I wanted to make the play and get off the field to give the offense an opportunity to score.

ON THE DEFENSE AS A UNIT

I think we are growing as a defense and learning how to come together as a team. We now know the speed of college football and still have a lot of work to do. Each week we are working hard to improve and get better.

Charleston Southern is a really good opponent and we have to get used to playing teams like them because this is how it will be next year in the SoCon. We came here to play opponents like them. It’ll be fun to be in that environment and see how we respond.

ON TOUCHDOWN PASS TO DEMETRIUS AGAINST MARYVILLE

I saw Demetrius breaking and knew if I threw an interception it wouldn’t be good. I threw the ball where he could get to it and it worked out. I threw it pretty high, but Demetrius is one of the best athletes on the team and he made a great play.

ON IMPROVING FROM WEEK ONE TO WEEK TWO

It’s still pretty fast out there. I am getting used to the speed and experience. I just plan on growing as the year goes on and get comfortable with more game experience each week.