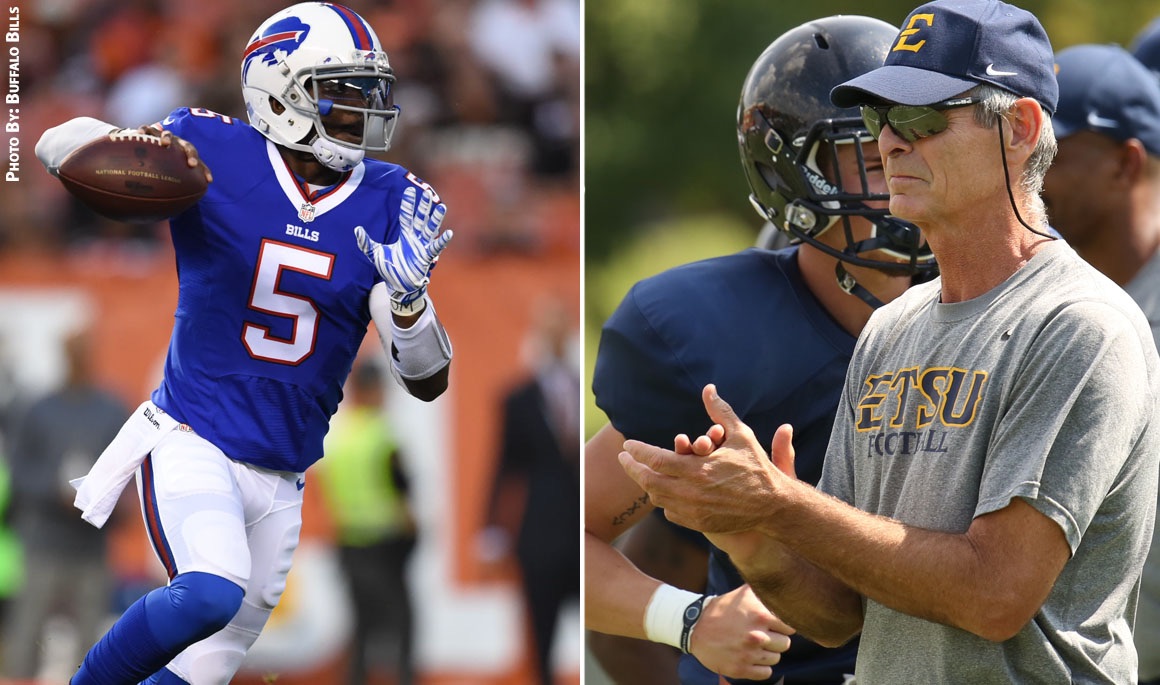 During his time as Virginia Tech quarterbacks coach, ETSU offensive coordinator Mike O’Cain coached Tyrod Taylor to a decorated career. Taylor, who received 2010 ACC Player of the Year honors, was also named MVP of the ACC Championship game in 2008 and 2010. After guiding Virginia Tech to a pair of bowl wins (2009 Orange Bowl and 2009 Chick-fil-A Bowl), Taylor was taken in the sixth round of the 2011 NFL Draft by the Baltimore Ravens. Following a four-year stint with the Ravens -- where he received a Super Bowl ring (2012 season) -- Taylor signed with the Buffalo Bills this past March and was named the Opening Day starting quarterback heading into week one this past Sunday. In his first career NFL start, Taylor earned the win for Buffalo, beating the Indianapolis Colts, 27-14. Taylor went 14-for-19 and threw for 195 yards with one touchdown.

Tyler Dunne of The Buffalo News interviewed Coach O’Cain before Buffalo’s season opener and got his thoughts on Tyrod Taylor. Below is the full article that ran in Sunday’s newspaper.

On how raw Taylor really was: “He wasn’t necessarily a raw passer. He had the talent throwing the football. But going through all of his reads. He’s not the tallest guy in the world—six feet tall—so he had a difficult time seeing everything that was going on in front of him. A lot of time, instead of throwing the football, he had more confidence pulling the ball down to run. He wasn’t great in the pocket. He had happy feet. And mainly, that was because of the lack of experience there. The more he did it, the more confident he became in the pocket. The better we became around him to help him. By the time he was a senior, he was a very good pocket passer.

“He came to college and was still able to do that because of his athleticism. Now, he made some poor plays doing the exact same thing but he also made some big plays. You lived with the negative ones and hopefully he was learning. And as he became more comfortable and as he did it more and more, as he began to read coverages and knowing what defenses were trying to do to us, the more comfortable he became. It was really more about repetition and just experience.”

On making reads: “It wasn’t so much that he couldn’t make the read. He didn’t have patience to make the read. He understood the game well enough to go from 1 to 2 to 3. He understood that. He knew where to go but he didn’t have the patience. He didn’t have that pocket presence yet. That changed over time. He developed that pocket presence, that confidence in the people around him that they’d protect him and allow him to stay in there that extra second and get to his second and third read to get the pass completed.”

On wanting him to keep his ability to run: “He still has that in him a little bit. I don’t think that’ll ever leave. Probably because of his height. But I believe he’ll do fine. Will he be perfect? Absolutely not. But I believe he will bring something to that team that you can’t put on paper, that you can’t measure with his height, his weight, his speed and all that. He’s got a knack. He’s got charisma. You can’t coach it, can’t teach it, the good Lord gave it to him. And people rally around that. They have confidence in him. He can extend the play. He can turn a bad play into a big play. When you do that a couple of times, your team rallies around that. I believe he’ll be fine. He’ll do a great job.”

On Taylor being a true QB: “There are pure quarterbacks in the NFL. Guys who, when you say ‘quarterback,’ this is what you’re looking for. But guys who have the ability to take a bad play and make it a good play—some of it’s athleticism, some it’s I don’t know. I’ve been around this business playing and coaching for about 50 years and some people just have it. And I don’t think they develop it. It’s just something you have.

On Taylor’s charisma: “Peyton Manning has it because of his work ethic, his ability to read defenses and throw the football. He’s not blessed with the 4.5 speed. Tyrod’s charisma comes from not necessarily standing in the pocket to make that great throw—which he can do—but his is when things break down to turn that five-yard loss into a 15-yard gainer or that five-yard gainer into a 40-yard gainer. Having a feel for when to use that and when not to use that is tremendously important as well.”

On bouncing back from the James Madison loss: “Obviously he was upset when we lost but he didn’t get hangovers from it. He put things behind him and moved on. That’s what you’ve got to be able to do. As a quarterback, you can’t be on the emotional roller-coaster. You need to be even keel—not unemotional—but those emotional swings have to be just a little bit high and just a little bit low. Tyrod has always been able to do that. He was never tremendously excited or overly down if he got beat or made a mistake.”

On the teammates around Taylor: “He’s a guy people respect. You can’t measure that when it comes to your quarterback. … I know he has earned respect with his work ethic. Now, it’s about him doing well enough to get that on the field, on Sunday.”