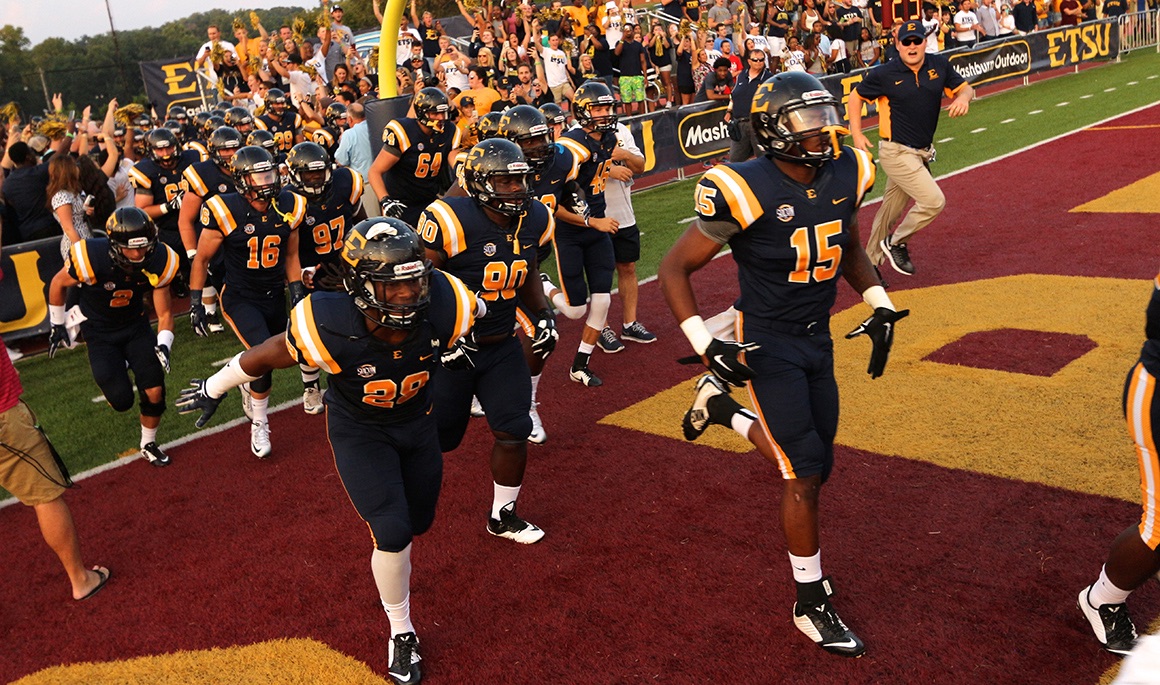 JOHNSON CITY, Tenn. (Sept. 16, 2015) – The ETSU football team hits the road for the first time this season as the Bucs gear up for a Thursday night game at Charleston Southern. Kickoff is set for 7 p.m., at Buccaneer Field.

Despite scoring 21 first-half points, ETSU (0-2) was shutout in the second half and Maryville defeated the Buccaneers, 28-21, last Thursday night at Kermit Tipton Stadium ... Maryville quarterback Evan Pittenger connected on a 35-yard touchdown pass to Trenton Shuler on 3rd-and-6 for the game-winning score with 9:39 remaining in the game ... As a team, ETSU was plus-9 in first downs (27-18) and plus-63 in total yards (416-353), but turnovers proved to be the deciding factor ... The Bucs turned the ball over three times, resulting in 14 points for Maryville, while ETSU turned an interception into a touchdown ... Red-shirt freshman running back Jajuan Stinson (Knoxville, Tenn.) rushed for a game-high 114 yards on 25 carries, while quarterback Austin Herink (Cleveland, Tenn.) was 11-for-15 with 78 yards and one touchdown ... The Buccaneer quarterback also recorded 21 yards on the ground and rushed for a score ... Red-shirt freshman linebacker Dylan Weigel (Pickerington, Ohio) led the Bucs with 11.5 tackles, while Trey Quillin (New Albany, Ohio) and Ferguierson Charles (Ft. Myers, Fla.) both registered a sack ... Junior defensive back Tavian Lott (D’Lo, Miss.) had ETSU’s first interception of the season, which led to a 5-play, 71-yard scoring drive capped off by a 17-yard touchdown reception by Demetrius Anthony (Fountain Inn, S.C.).

Charleston Southern (1-1), who is coached by former ETSU quarterback and quarterbacks coach Jamey Chadwell, is receiving votes in the STATS FCS Top 25 and Top 25 Coaches Poll ... Following a 41-14 win over North Greenville in their season opener, the Buccaneers suffered a 44-16 loss at Troy this past Saturday ... Defensively, the Buccaneers lead the Big South in rushing defense (95.0 yards per game) and are tied with Liberty for the lead in sacks (7) ... On the flip side, Charleston Southern ranks second (behind Kennesaw State) in rushing offense (280.0 yards per game) and time of possession (35:27) ... Individually, junior running back Darius Hammond paces the Big South in rushing (137.5 yards per game), ranks second in all-purpose yards (193.0 per game) and is tied for fifth in scoring (6.0 points per game) ... Five different Buccaneers have recorded a sack on the season, while freshman linebacker Solomon Brown ranks second in the conference in sacks (3) and tackles for loss (4) ... Coach Chadwell has a .704 winning percentage (19-8) at Charleston Southern, while his teams are 11-1 in games played in August/September.

ETSU has swept all five games in the series history as the Buccaneers have outscored Charleston Southern, 214-43, in those meetings ... The last time the two programs met was back in 2001 when ETSU blanked Charleston Southern, 26-0 ... Current ETSU color analyst Matt Wilhjelm got the Bucs on the board as he connected on a 55-yard touchdown pass to Cecil Moore, which was the only offense needed to secure the win ... ETSU’s defense held Charleston Southern to only 188 yards on offense, while recording two interceptions (Tony Tiller & Gerald Sensabaugh) ... Coach Chadwell was the quarterbacks coach in that game, as well as in the 55-7 victory in 2000 ... In 1998, Chadwell threw for 130 yards and two touchdowns in a 41-29 win against Charleston Southern.

Fans can also listen to the radio call on WXSM-AM 640 The Extreme Sports Monster or on 104.9 NASH Icon. “Voice of the Bucs” Jay Sandos will carry the play-by-play, while Matt Wilhjelm will be the color analyst and Jessica Larkin will be the sideline reporter. The Buccaneer Sports Network will launch its pregame broadcast one hour and 30 minutes prior to kickoff with the 30-minute long Eastman Credit Union Tailgate Show, followed by the Carl Torbush Pregame Show powered by Ford which will lead up to 30 minutes prior to kickoff. The First Bank and Trust Company Countdown to Kickoff will then lead into the final moments before kickoff. An audio stream will be available via ETSUBucs.com or by clicking here.

In addition to following the Bucs on your mobile device and/or tablet with live audio and video, fans can get up to the minute stats by following the action via StatBroadcast. Fans can access live stats on their computers, mobile devices or tablets by clicking here.

Fans needing to purchase tickets to Thursday’s game can do so by calling the Charleston Southern Ticket Office at (843) 863-7213 or by clicking here. Reserved seats are $20 each, while general admission tickets are $15 each.

The Bucs return home for their Homecoming game as ETSU hosts Emory and Henry on Sept. 26 at Kermit Tipton Stadium. Kickoff is slated for 1:30 p.m.