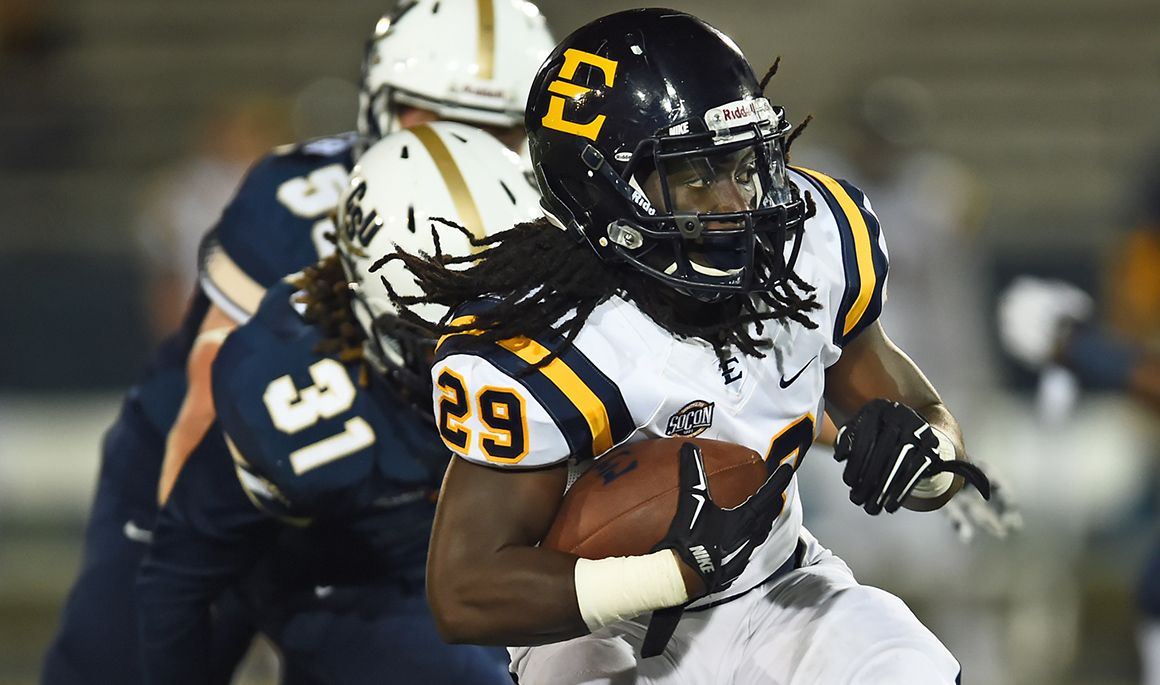 NORTH CHARLESTON, S.C. (Sept. 17, 2015) – For the first 15 minutes Thursday night at Charleston Southern, the East Tennessee State University football team held its own against one of the better Football Championship Subdivision teams in the country.

Unfortunately for ETSU, the next 45 minutes did not go as well in its first road game of the year.

Charleston Southern outscored ETSU 34-0 in the second quarter and used that offensive outburst to cruise to a 47-7 victory at Buccaneer Field. A youthful ETSU team comprised of mostly freshmen and playing an independent schedule in its first season since 2003, dropped to 0-3 on the year, while Big South Conference member CSU improved to 2-1 on the season.

Though both teams are known by the nickname Buccaneers or Bucs, it was the crew from Charleston, S.C., that finished with 294 yards in total offense by halftime, compared to just 73 yards total for the Bucs from Johnson City.

The game started well for ETSU, as the team played a solid first quarter, using a quality 41-yard return from freshman Domenique Williams (Charlotte, N.C.) on the opening kickoff to set up good field position at its own 41-yard line. While East Tennessee State was unable to gain a first down, both teams ultimately traded possessions throughout the first 15 minutes and the quarter ended in a scoreless tie.

Unfortunately for ETSU, the final play of the first quarter did not end well and ultimately served to change the complexion of the game, as punter Marion Watson (Waxhaw, N.C.) bobbled a snap and was forced to fall on the loose ball at the ETSU 35-yard line. Following the botched snap, CSU pounced with the change in momentum.

First, Charleston Southern used just two plays to go 35 yards and score the first touchdown of the game on a 10-yard run by Mike Holloway. While a 2-point conversion attempt failed, CSU still led 6-0 just 54 seconds into the second quarter. On the ensuing possession, ETSU quarterback Nick Sexton (Seymour, Tenn.) entered the game for the first time and was intercepted on his first play from scrimmage. Charleston Southern took advantage quickly, scoring in one play on a 16-yard pass from quarterback Kyle Copeland to wide receiver Nathan Perera.

After another three-and-out for ETSU’s offense, CSU added its third score of the game on an eight play, 65-yard drive that ended with a 3-yard run by Holloway to make it 20-0 with 9:09 left in the half. On the following kickoff, ETSU failed to cover a pooch kick and CSU recovered the loose ball at the ETSU 18 yard line. Two plays later, Charleston Southern made it 27-0 on a 5-yard run by Kelan Fraise.

While ETSU managed a first down on its next drive, CSU had the ball for the final possession of the half and scored with 28 seconds left thanks to a 1-yard run by Darius Hammond, making it 34-0 at the break.

In the second half, CSU extended its advantage when Alan Barnwell scored from six yards out. The extra point attempt missed and Charleston Southern led 40-0.

ETSU was able to finally break through on the scoreboard midway through the fourth quarter, as redshirt freshman tailback Tony Drew (Nashville) scored on a 1-yard touchdown run, capping a 14-play, 80-yard drive that took 6:35 off the clock. With 8:40 left in the game, ETSU trailed 40-7.

CSU’s final score of the night came after ETSU had put together another solid drive and appeared to be going in for a score. However, tight end Tyrus Rollins (Greeneville) was unable to handle a pass from Sexton and on the deflection Charleston Southern cornerback Larenzo Mathis intercepted the pass, sprinting 87 yards to a score to make it 47-7 with just over three minutes left in regulation.

For the game, CSU finished with 406 yards in total offense compared to 228 for ETSU. Quarterback Austin Herink (Cleveland) finished the night with 99 yards passing on 10-of-13 attempts, while Sexton finished with a 3-of-6 clip with two interceptions. On the ground, Drew led the way with 38 yards on eight carries.

ETSU will return to action next Saturday, Sept. 26, hosting Emory & Henry for Homecoming at Kermit Tipton Stadium. Kickoff is set for 1:30 p.m.

For more on ETSU football throughout the season, visit ETSUBucs.com and click on the football link.

On the second quarter: “In my opinion, we shot ourselves in the foot enough today that they got 28 points more so to do with us not getting our job done than anything they did. They do have a good scheme, (CSU head coach) Jamey (Chadwell) does a nice job, and they’ve got some really good players, so they will win some ball games this year.”

On the Bucs first quarter play: “I thought we played well in the first quarter. Then the dropped punt turns into a touchdown and the interception into another touchdown, and all of a sudden we’ve given them two scores. We’ve got to put together four quarters. We put together a first quarter and a third quarter, but we have to make sure we start playing a complete game.”

On the Bucs’ young players: “We can use the excuse of youth all we want, but we are not young anymore. We’ve played three games, we’ve had our battle scars and our scar tissue, and it’s now time for these guys to perform up to their ability and avoid these mistakes that are keeping us from a chance to win in the fourth quarter.

On the first road trip for ETSU: “Playing on the road is always a challenge because it is different, but I thought we handled everything well. I give (CSU) the credit for how the game went. They have good players, good coaches and a scheme that works well. I feel strongly they will win a lot of games this year, but that doesn’t help where we are with our team and what we need to do to get better. This is the type of FCS competition we are going to play some more this year, and week-in and week-out next year. I saw enough good things today that if we will put together four quarters and make more plays then we have a chance to be a quality football team.

Following the first quarter: “We expected to be in the game truthfully. Unfortunately, we made a lot of mental errors at that point and that’s something we can’t do.”

On the next two off days and preparing for the Homecoming game next week: These two days can’t be a break. You have to be thinking about football. You can’t sit on your butt and play Playstation for two days. We have to think about what we can do. Get back, get focused and start preparing for them (Emory & Henry).”

On scoring the touchdown: It felt good to get in the end zone, but we need to focus on getting better. The offensive line did a nice job blocking and created some running lanes for me. We look forward to getting back to work and preparing for our next opponent.

On the second quarter: We started out with a lot of mental mistakes and missed opportunities and missed assignments. We just have to go back to work.

On the second half: “I feel like we bounced back in the second half and were much more physical. We want to keep that approach for a full game. After the first quarter, we felt like we had a great chance to compete and play a good game.