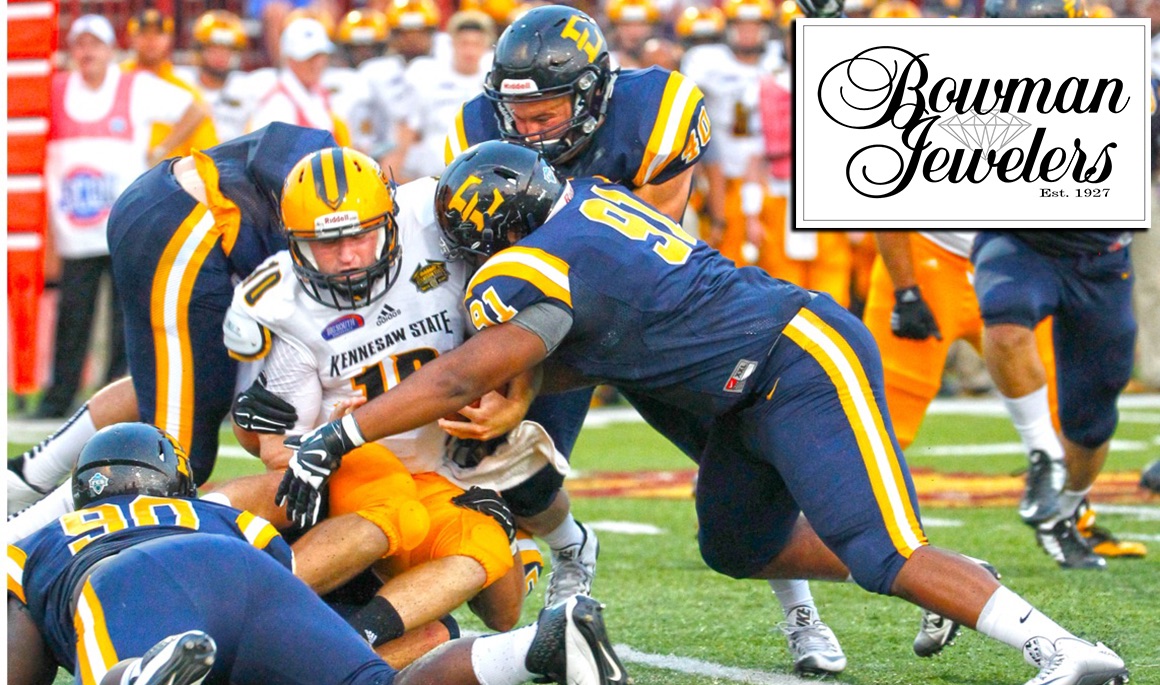 JOHNSON CITY, Tenn. (Sept. 18, 2015) – Following each game during the 2015 college football season, ETSU head coach Carl Torbush announces his Bowman Jewelers Offensive, Defensive and Special Teams Player of the Game, along with the Effort Play of the Game and the “Look Team” Players of the Week.

Below are the week three recipients from Thursday’s Charleston Southern game.

Effort Plays of the Game

There was a tie for The Effort Play of the Game as defensive lineman Tremond Ferrell (Washington, Ga.) and wide receiver Chad Pritchard (Elizabethton, Tenn.) were co-recipients of the award. Ferrell hustled 20 yards to track down Charleston Southern’s Nathan Perera for the tackle on a 23-yard catch in the second quarter. Meanwhile, Pritchard made a spectacular 28-yard reception on a 3rd-and-10 play late in the first quarter to keep ETSU’s drive alive. Quarterback Austin Herink (Cleveland, Tenn.) escaped pressure and found Pritchard open on the Charleston Southern sideline as the ETSU wide receiver did an outstanding job of getting a foot inbounds, while maintaining possession of the football.

Below is video of Ferrell’s hustle play…

Below is video of Pritchard’s catch…

COACH TORBUSH ON JACKSON AND SPAGNOLETTI

"Both of these players are giving us the type of effort that we need and they need to help make the team get better this year, but also help them get in position to be impact players in the future."

Jackson, a multi-sport athlete at Christianburg High School, lettered in football, basketball and baseball … He was named 2014 Defensive and Offensive Back of the Year, while also being a two-time all-conference selection as a defensive back ... Jackson received the 2014 Male Athlete of the Year, and led the Blue Demons in solo tackles in 2014, while also recording seven interceptions.

Spagnoletti was a football and track standout at Liberty High School … Was an all-district and all-conference pick during his prep football career, while also earning all-state honors in track … He averaged 24 yards per reception and a touchdown every 3.1 receptions … The Bealeton, Va. native was selected to multiple All-Star games including the North vs. South All-Star Game, the Texas vs. The World All-Star Game, and the VHSCA East vs. West All-Star Game … He runs a 4.4-second 40-yard dash … Was a four-time all-state pick in track, earning gold and silver medals at the US Nationals and at the USATF Junior Olympics.