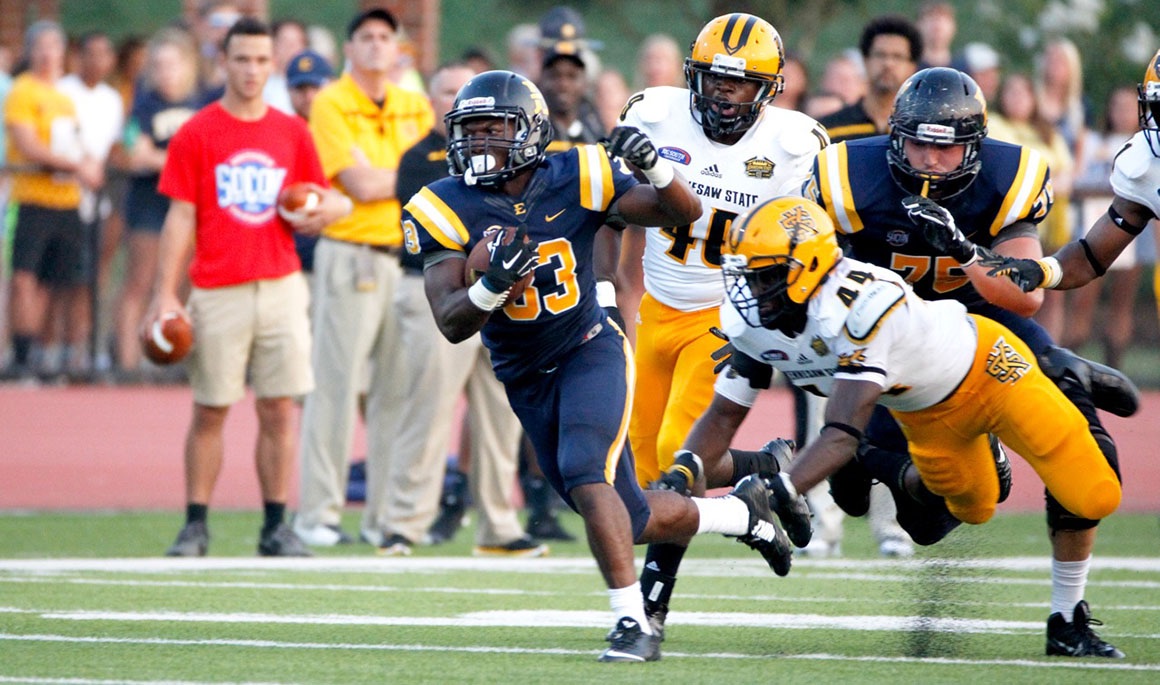 Despite holding Charleston Southern scoreless in the first quarter, ETSU couldn’t continue the trend as CSU scored 34 points in the second quarter and handed the Buccaneers a 47-7 setback last Thursday night at Buccaneer Field … ETSU’s only touchdown came on a 1-yard touchdown run by red-shirt running back Tony Drew (Nashville, Tenn.), which capped off a 14-play, 80-yard scoring drive … Drew led the Buccaneer running backs with 38 yards on eight carries, while Falon Lee (Macclenny, Fla.) averaged 7.3 yards per carry last Thursday … Red-shirt freshman quarterback Austin Herink (Cleveland, Tenn.) was 10-for-13 with 99 yards and freshman Drake Powell (Clinton, Tenn.) led the ETSU receiving corps with three catches … Defensively, Dylan Weigel (Pickerington, Ohio) paced the Blue and Gold with seven tackles, while he, River Boruff (Sparta, Tenn.) and Kahlil Mitchell (South Pittsburg, Tenn.) all recorded a tackle behind the line of scrimmage … Freshman returner Domenique Williams (Charlotte, N.C.) – who opened the game with a 41-yard kickoff return – finished with 96 yards on four returns … As a team, ETSU turned the ball over four times (two interceptions, fumbled kickoff and botched punt), resulting in 27 points for Charleston Southern … ETSU’s offense rushed for 103 yards and passed for 125, compared to CSU running for 223 yards and throwing for 183.

Emory & Henry is coming off a 30-13 loss to Maryville last weekend at home, following its 55-7 victory over Ferrum in the season opener … As a team, Emory & Henry is averaging 386.5 yards per game (179.5 rushing/207.0 passing), while its defense is allowing 263.5 yards per game (144 rushing/119.5 passing) … Sophomore running back Chris Thompson leads the team with 127 rushing yards and has accounted for two of the Wasps’ five rushing touchdowns, while Appalachian State transfer and 2014 Old Dominion Athletic Conference (ODAC) Rookie of the Year Kevin Saxton is 33-for-68 with 405 passing yards and three touchdowns … The Emory & Henry quarterback has also thrown two interceptions … Red-shirt freshman Kelman Simpson – a 6-6 wide receiver – is Saxton’s top threat as he leads the team in receptions (11), yards (105) and has one of three receiving touchdowns for the Wasps … Emory & Henry’s defense – which ranked sixth in the country last season with 31 takeaways – has already recorded seven turnovers in 2015 (five fumble recoveries and two interceptions) … The Wasps have also registered five sacks and 21 tackles for a loss in 2015 as junior linebacker Josh Compton leads the team in sacks (2), while senior defensive back Ryan Byrd paces the group with 19 tackles … Starting defensive back Tre’von Lightfoot has accounted for both interceptions for Emory & Henry and also has 68 return yards on two kickoff returns … Last season, Emory & Henry went 8-2 (5-2 ODAC) to earn a share of the conference championship under then first-year head coach Curt Newsome – who was tabbed ODAC Coach of the Year.

Please note, umbrellas are not permitted inside Kermit Tipton Stadium.