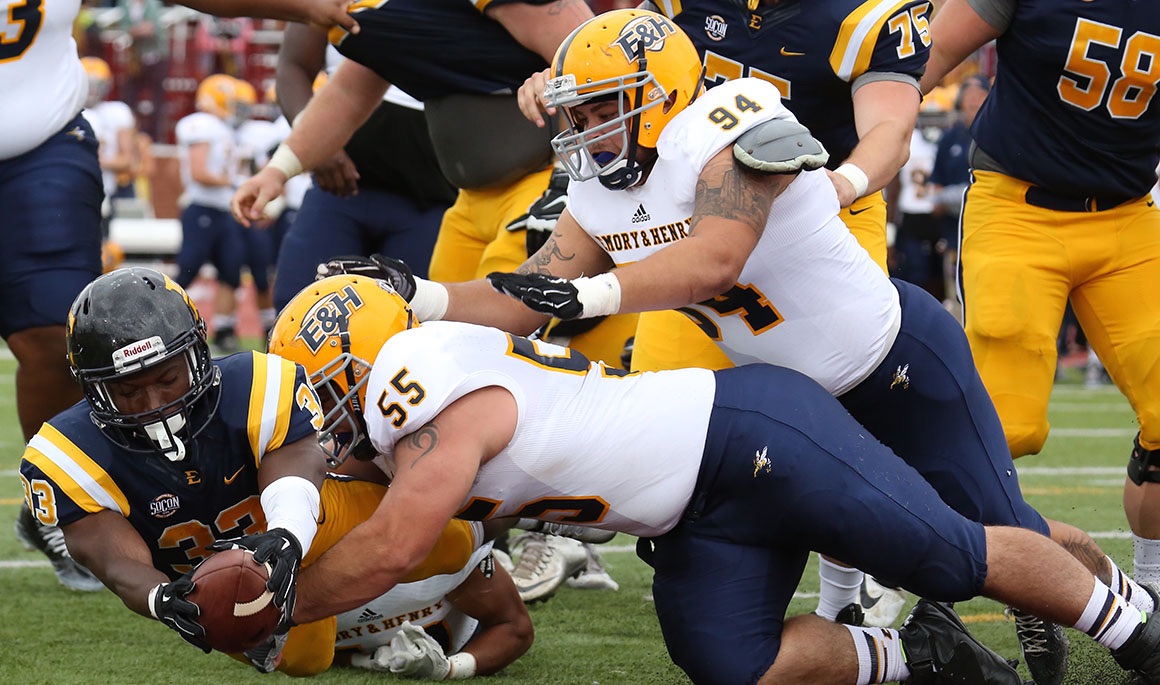 JOHNSON CITY, Tenn. (Sept. 26, 2015) – Leading 24-20 with just over two minutes left in regulation, the ETSU football team went for the win over Emory & Henry. Unfortunately for the Buccaneers, the decision did not pay off.

Facing a fourth down and mere inches at midfield, the Bucs chose not to punt the football away. Instead, ETSU quarterback Austin Herink (Cleveland) was stopped on a quarterback sneak attempt, giving the Wasps one final shot to steal away a victory. Emory & Henry responded with a lightning quick drive that ended with a 7-yard scoring pass from Kevin Saxton to Tyree Ward, as the Wasps spoiled the Bucs' Homecoming, 27-24, with a capacity crowd of 8,413 in attendance on Saturday afternoon at Kermit Tipton Stadium.

ETSU had appeared to be heading to its first victory in its inaugural season, and the first win for the program since the team last played in 2003. To that point, Herink had played the hero role, hitting freshman wide out Dalton Ponchillia (Nashville) on a go-ahead, 45-yard scoring strike to make it 24-20 with 14:13 left in the game.

After having shared time with fellow freshman Nick Sexton (Seymour) so far this season, Herink took every snap in the game and responded by going 17-of-28 through the air for 261 yards and a score. However, it was not enough to get the victory.

The Bucs started the game with a great deal of efficiency on the offensive side of the ball, building a 14-0 lead just eight minutes into the contest. ETSU’s first score came on a 1-yard run by freshman tailback Jajuan Stinson (Knoxville), who had to snare an errant snap intended for Herink before he was able to power his way into the end zone. Stinson’s score capped an impressive eight-play, 62-yard drive that took 3:26 off the clock.

After stopping the Wasps on their next drive, Herink and Ponchillia connected on the longest offensive play of the year so far for the Bucs, a 56-yard pass play that took the ball deep into E&H territory. Later in the drive, Stinson scored for the second time of the game on a 3-yard run to make it 14-0 with 7:08 left in the first quarter.

At that point, E&H responded with a scoring drive of its own that ultimately ended with a 14-yard touchdown run by Chris Edwards to make it 14-7 with 5:04 remaining in the opening quarter. Early on in the second quarter, the Wasps took advantage of a double-pass trick play that resulted in wide receiver Nick Webb tossing a 36-yard scoring pass to Ward to tie the game 14-14. On the scoring play by E&H, the initial pass from Saxton appeared to go forward and drew a flag from the official nearest the play. However, after conferring with others on the officiating crew, the flag was waved off.

Having lost the momentum for much of the second quarter, the Bucs were able to recover in the final minutes of the half, driving to the Wasps 13-yard line and finishing with a 20-yard field goal by JJ Jerman (Seymour) to gain a 17-14 lead at the half.

After the break, Herink threw his first interception of the season on the opening drive of the half, setting the Wasps up with prime field position. While E&H was unable to move the ball, the Wasps still managed to tie the game on a 48-yard field goal by Skyler Simcox.

Following multiple possessions by both teams, Simcox was able to give the Wasps the lead when he was good on another 48-yard field goal to make it 20-17 by the end of the third quarter.

On the ensuing possession, the Bucs wasted little time regaining the advantage, as Herink found Ponchillia on an impressive 45-yard scoring pass to cap a seven-play, 84-yard drive that made it 24-20 in favor of ETSU with 14:13 left in the game.

Later in the quarter, E&H again had a chance at a field goal from 45 yards way, but Simcox missed for the first time in the game.

After two changes in possession, the Wasps appeared to be stopped on downs, but faked a punt to keep the drive alive. E&H then converted on another fourth down play at midfield, but later on in the same drive Saxton fumbled a snap on another fourth down play, allowing the ETSU defense to converge and take over on downs at its own 30-yard line with just under five minutes left in the game.

That final ETSU drive ended with Herink’s sneak attempt and set up the Emory & Henry heroics.

For the game, E&H outgained the Bucs 389 to 369 in total offense. Ponchillia finished with a game-high 117 yards receiving, while Stinson led the rushing attack for ETSU with 40 yards on 16 carries.

The Bucs will return to action at home next Saturday afternoon, taking on St. Francis at 1 p.m. inside Kermit Tipton Stadium. For more on ETSU football throughout the 2015-16 season, visit ETSUBucs.com and click on the football link.