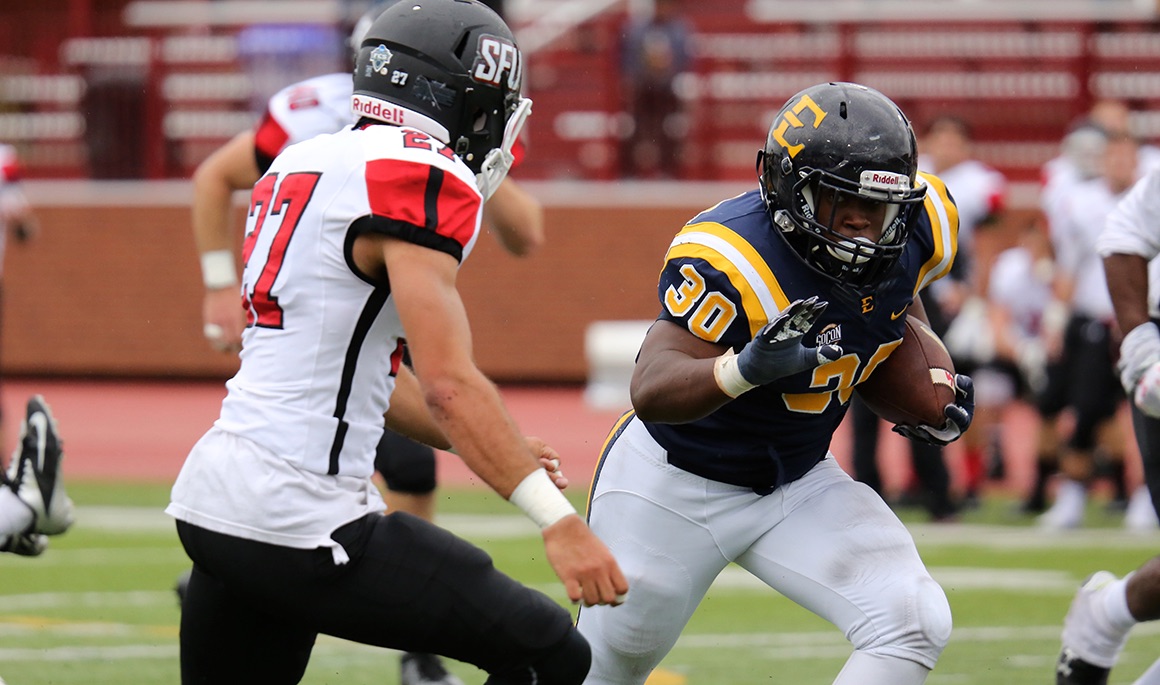 JOHNSON CITY, Tenn. (Oct. 3, 2015) – Saint Francis returned the opening kickoff for a touchdown and intercepted three ETSU passes in the first half – returning two for touchdowns – as the Red Flash built an early lead and ultimately bested the Buccaneers 58-9 in a matchup of NCAA Division I FCS programs Saturday afternoon at Kermit Tipton Stadium.

An announced crowd of 6,000 witnessed the Bucs drop to 0-5 on the season, while Saint Francis improved to 2-2 on the year.

For the game, the Red Flash outgained ETSU 336 to 185 in total offense, with the Saint Francis running attack picking up 108 yards of the total yards. Meanwhile, the Bucs were held to just 12 yards of offensive production in the first half.

The game started in nightmarish fashion for the Bucs, as Saint Francis struck for 17 points in the first eight minutes of the contest.

Kick returner Lorenzo Jerome got things started for the Red Flash with a 98-yard kickoff return for a touchdown on the opening play of the game. After a three-and-out by the ETSU offense on the ensuing possession, Saint Francis put together a nine-play, 57-yard drive that ended with a 28-yard field goal by Lance Geesey to make it 10-0.

On the Bucs’ next drive, ETSU quarterback Austin Herink (Cleveland) attempted a pass on third down that was intercepted by Saint Francis safety Robert Miller and returned 40 yards for another Red Flash touchdown.

With the score 17-0, the Bucs finally got on the scoreboard after Saint Francis center Jimmy Marks twice snapped the ball over the head of quarterback Zack Drayer on the same drive. The second poor snap by Marks ended up in the end zone and was recovered by Drayer for an ETSU safety.

Taking back over at midfield after the Saint Francis free kick, the Bucs gave up the little momentum they had when Herink was again intercepted, this time by Jerome, who returned the ball deep into ETSU territory. Two plays later, running back Khairi Dickson – last year’s FCS leading rusher – rambled in from 13 yards out to make it 24-2 in favor of Saint Francis early in the second quarter.

After alternating possessions, the Red Flash struck again on a five-play, 61-yard scoring drive. The possession was sparked on the opening play by a halfback pass that covered 53 yards to the ETSU 8-yard line. After a holding call pushed Saint Francis back, Drayer dropped back to pass and ultimately scrambled in from seven yards out. The extra point was good and ETSU trailed, 31-2.

On the next possession, backup quarterback Nick Sexton (Seymour) was intercepted by linebacker Sean Orsini, who returned the ball 34 yards for a touchdown. After the kick, the Bucs faced a 36-point deficit and the score stayed 38-2 into halftime.

After the break, Saint Francis added to its lead with a 37-yard touchdown pass from Drayer to wide receiver Terrell Smith with 7:18 left in the third quarter. The extra point was blocked by freshman safety Austin Jackson (Cary, N.C.), but the Red Flash still led 44-2. The Red Flash later added another score on a 6-yard touchdown run by Wesley Nagaseu to make it 51-2.

ETSU was able to respond offensively on its next offensive possession, scoring its first touchdown of the game thanks to a 6-yard scoring run by Herink. The eight-play, 83-yard scoring drive was bolstered by several strong runs by redshirt freshman tailback Cory Colder (Ashburn, Va.). Colder led the ETSU running backs with a season-high 56 yards, including a 24-yard burst on the touchdown drive.

Saint Francis added a final touchdown midway through the fourth quarter on a 2-yard scoring run by Marcus Bagley to make it 58-9 and end the game’s scoring.

The Bucs will have a bye week next Saturday and return to action on the road Oct. 17 at Mercer in Macon, Ga. For more on ETSU football throughout the 2015-16 season, visit ETSUBucs.com and click on the football link.