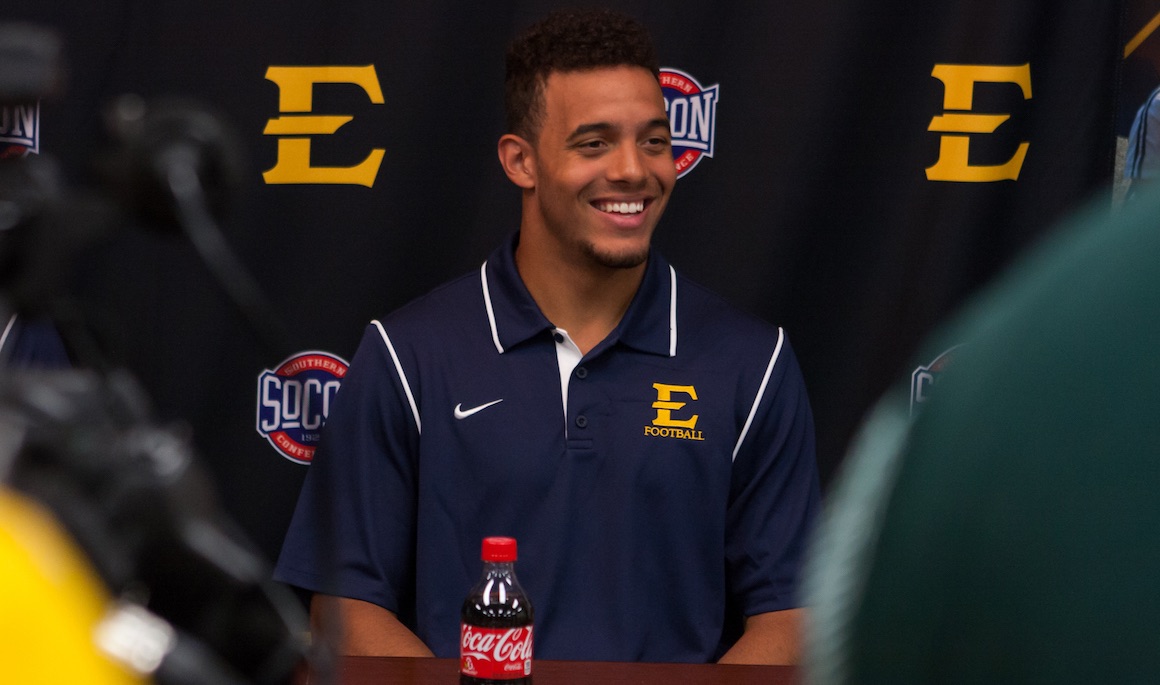 Head coach Carl Torbush and players Drake Powell (Clinton, Tenn.) and Austin Gatewood (Ooltewah, Tenn.) met the media at the press luncheon as the Bucs head into game week against Mercer on Saturday afternoon in Macon, Ga. Kickoff is set for 4 p.m.

Below are comments by Coach Torbush, Powell and Gatewood.

This week will be another good test for our program. Mercer was like us three years ago as they restarted football and now they are in the Southern Conference. It gives us a chance to see the caliber of teams we will face week in and week out in conference play next season.

Coach Lamb is a good friend of mine. He did a great job when he was at Furman and has done a nice job starting up the program at Mercer. They are very well-balanced on offense and that’s what Coach Lamb’s programs strive for. They also limit their turnovers and control the clock. Mercer has done a really good job with their turnover margin, as they haven’t thrown an interception in their first five games.

After winning their first two games they have lost three really tough ones. They have been competitive in every game as their three losses have been by a combined 11 points. Mercer can easily be sitting here at 5-0 on the season.

We have two challenging games coming up at Mercer and Montana State. We will get a good look at two strong FCS teams. Mercer was receiving votes in the Top 25 and Montana State has been ranked all season. Our players understand these will be two tough tests.

ON TALKING TO COACH LAMB FOR ADVICE ON STARTING THE PROGRAM

I definitely talked to Coach Lamb during our process of starting the program. They were like us three years ago. Scheduling was a key part of our conversations and their new stadium was also a big plus for them. They were in the Pioneer League their first year and moved into the SoCon from there. Mercer brings a lot to the SoCon. They are in a recruiting-rich area being in South Georgia and near Atlanta.

ON THE BYE WEEK

The bye week came at a good time as it gave us a chance to heal up. It also gave us the opportunity to work on us than focus on the next opponent. We went hard (Tuesday-Thursday) and gave them the weekend off to go home since it was the last time to do that until the end of the season. We returned with two good practices (Monday and Tuesday morning) and are in game week mode.

We’ve had two solid practices (yesterday and today) and the tempo has been good. We are looking forward to playing Mercer since they are a good program and will be a conference opponent next year.

Mercer runs the ball really well. They have hard-nosed running backs and run between tackles, but can run outside. They can also hit you with deep ball on play action. We have been preparing well at practice, but we also have to take care of ourselves and play good football for four quarters.

ON BYE WEEK COMING AT A GOOD TIME

I think the bye week came at a good time for us. It’s at the halfway mark of the season, so it gave us a chance to work on getting better and preparing ready for the second half of our season. This is a prefect spot for us to move forward.

ON BACK-TO-BACK ROAD GAMES AGAINST MERCER AND MONTANA STATE

These will be two good tests for us. Mercer and Montana State are strong programs, but this is what we will face each week in the SoCon next year. Every game is hard, but it makes us better as a program.

WORKING ON BEING CONSISTENT ON OFFENSE

We have to focus on executing each play and not looking back at what we did wrong or right. We also need to live in the present and not in the past or future. It’s easier said than done, but if we can work on this we will put together four quarters of competitive football.