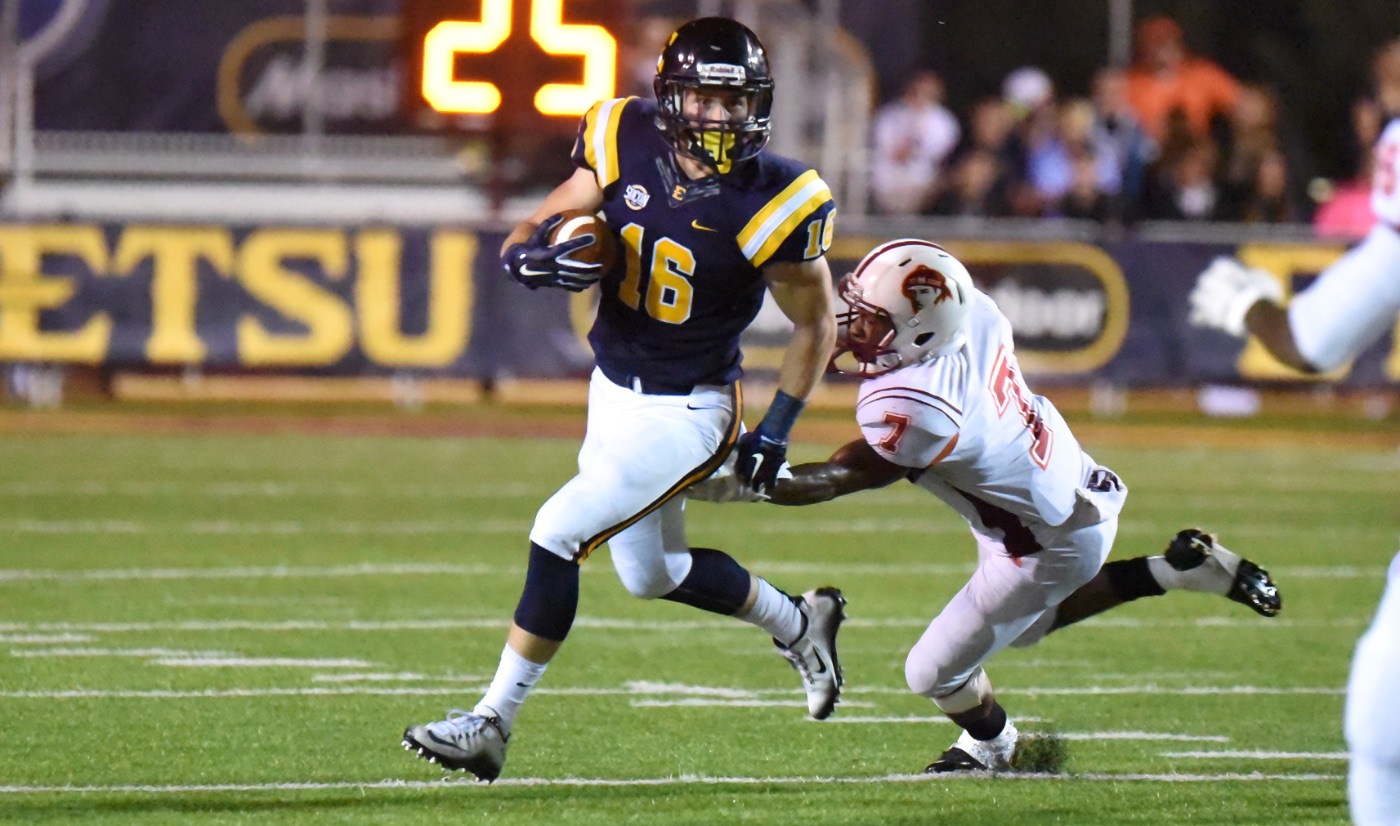 Game to be broadcast on ESPN3

MACON, Ga. (Oct. 16, 2015) – Coming off its bye week, the ETSU football team returns to action as the Bucs gear up for back-to-back road games, beginning this weekend at Mercer. Kickoff is slated for 4 p.m., at Five Star Stadium.

The game will be broadcast on ESPN3 with Dan Matthews providing the play-by-play, Tyrone Poole will be the analyst and Nancy Mousa will handle sideline reporting.

A LOOK BACK AT SAINT FRANCIS GAME

Saint Francis returned the opening kickoff for a touchdown and intercepted three ETSU passes in the first half – returning two for touchdowns – as the Red Flash built an early lead and ultimately bested the Buccaneers 58-9 in a matchup of NCAA Division I FCS programs on Saturday, Oct. 3, at Kermit Tipton Stadium … The Bucs’ lone touchdown came on a 6-yard run by quarterback Austin Herink (Cleveland, Tenn.) with 10:33 remaining in the contest, capping an 8-play, 83-yard drive … Red-shirt running back Cory Colder (Ashburn, Va.) accounted for 51 of the 83 yards on the drive, including a 24-yard rush marking his longest of the season … In the first half, ETSU got on the board when the Bucs recorded their first safety of the season with 1:31 remaining in the first quarter, while Austin Jackson (Cary, N.C.) blocked an extra point in the third quarter … Overall, Colder led the Buccaneer running backs with 56 yards on eight carries, while Dalton Ponchillia (Nashville, Tenn.) led the wide receivers for the second straight game after totaling 35 yards on four receptions … Austin Herink and Nick Sexton (Seymour, Tenn.) split time behind center and combined for 93 yards passing and three interceptions (two by Herink) … Defensively, linebacker Austin Gatewood (Ooltewah, Tenn.) recorded his first collegiate interception and cornerback Tavian Lott (D’Lo, Miss.) led the defense with a season-high eight tackles … Overall, ETSU was held to a season-low 185 yards on offense (92 rushing/93 passing), while St. Francis finished with 336 total yards (108 rushing/228 passing) … The Red Flash were 6-of-10 on third downs, compared to the Bucs’ 3-of-16 clip, while St. Francis converted on all five of its red zone trips (four TDs/one FG).

Mercer has dropped its last three games by a combined 11 points and enter Saturday’s game with a 2-3 record … The Bears, who are in their third season of FCS football (second in SoCon), are coming off a 24-21 setback last weekend at Western Carolina … Mercer jumped out to a 21-3 lead, but the Catamounts scored 21 unanswered points to secure the conference win … As a team, the Bears lead the SoCon in total offense (468.8), rank second in rushing defense (146.2), and third in scoring offense (32.2) and scoring defense (21.6) … Offensively, Mercer is led by junior quarterback John Russ and a pair of sophomore running backs in Tee Mitchell and Alex Lakes … Russ ranks third in the SoCon in total offense (259.0 yards per game), passing efficiency (144.2) and passing average/game (229.8) … Meanwhile, Mitchell – who has rushed for 523 yards in five games – is tied for the conference lead in scoring (8.4), ranks second in rushing (104.6) and is ninth in total offense (104.6) … Lakes ranks sixth in rushing (77.8), while Mercer has four receivers who have double-digit receptions, including sophomore Avery Ward who leads the SoCon in receiving yards per game (70.0) … Ward leads the Bears with 25 receptions and 350 receiving yards … Defensively, freshman defensive end Isaiah Buehler is tied for second in the SoCon in sacks per game (0.50) and ranks sixth in tackles for loss (1.0 per game), while junior linebacker Tosin Aguebor is tied for seventh in sacks per game (0.40) and tied for ninth in tackles for loss (0.90 per game) … Overall, Mercer’s defense has held its opponents to under 100 rushing yards three times this season and 10 times during head coach Bobby Lamb’s tenure (8-2 in those games) … The Bears are 11-1 in non-conference games under Coach Lamb, including 10-0 at home, while Mercer is also 13-4 at Five Star Stadium with an average winning margin of 26.1 points per game.

In addition to the game being streamed live on ESPN3, fans can also listen to the radio call on WXSM-AM 640 The Extreme Sports Monster or on 104.9 NASH Icon. “Voice of the Bucs” Jay Sandos will handle the play-by-play and former Buccaneer quarterback Matt Wilhjelm will be the color analyst.

In addition to following the Bucs on your mobile device and/or tablet with live audio and video, fans can get up to the minute stats by following the action via live stats courtesy of MercerBears.com. Fans can access live stats on their computers, mobile devices or tablets by clicking here.