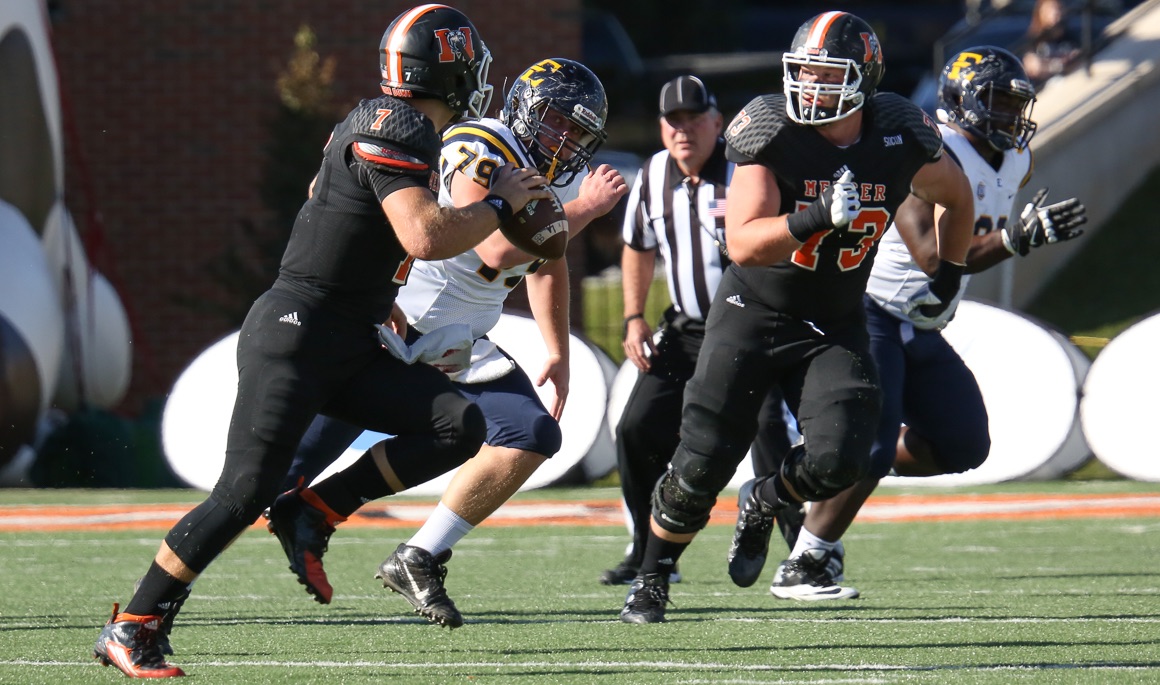 In a game that will be a Southern Conference affair in 2016, Mercer scored on its final five possessions of the first half, while the Bears outgained ETSU, 563-228, for the game. Mercer used two key fourth down conversions to gain momentum early on, while the Bears converted on all seven of its red zone chances (six touchdowns/one field goal).

The Bucs, who were coming off their bye week, dropped to 0-6 on the season, while Mercer snapped its three-game losing skid and improved to 3-3.

Despite forcing and recovering a fumble on the opening drive of the game, ETSU’s offense went three-and-out on its first series, while Mercer scored on its next five possessions to take a 35-0 lead into halftime.

Following the three-and-out by the Blue and Gold, Mercer capitalized on the ensuing possession, as sophomore running back Tee Mitchell scored on a 23-yard touchdown run on 4th-and-3, for the first score of the afternoon. The drive, which covered 11 plays and 80 yards in 4:39, also saw Mitchell have a key 27-yard run on 3rd-and-10 at the Mercer 43-yard line.

The Bucs failed to answer on their next possession as JJ Jerman’s (Seymour, Tenn.) 50-yard field goal attempt was blocked, and the Bears executed an 11-play, 91-yard scoring drive capped by a 10-yard touchdown reception from Marquise Irvin to go ahead, 14-0, with 2:01 left in the first quarter.

Mercer’s offense remained in sync as the Orange and Black used 10 plays to cover 74 yards en route to finding the end zone for the third consecutive possession as Russ connected on a 5-yard score to Brown, while a fumble by Anthony on ETSU’s next possession gave the Bears a short field to work with. Mercer took advantage of the miscue when Russ finished a 7-play, 50-yard drive with a 1-yard sneak, making it a 28-0 game with 6-plus minutes remaining before the half.

On their final possession before the break, the Bears went on a 5-play, 81-yard scoring drive as Brown caught his second touchdown pass from Russ with 2:30 left in the second quarter. Despite a 45-yard punt by Marion Watson (Waxhaw, N.C.) pinning the Bears down to their own 19, the Russ-Brown show highlighted the drive. Russ connected on a 50-yard pass play to Brown on the first play of the series, while four plays later the duo showed up again to wrap up the drive in 2:11.

Overall, Mercer ran 17 more plays than ETSU in the first half, 46-29, while outgaining the Blue and Gold, 373-75. The Bears registered 207 rushing yards, compared to 51 by the Buccaneers. Russ was 11-for-18 with 166 yards and three touchdowns, along with picking up 50 yards on the ground (one rushing touchdown). Anthony led the ETSU offense with two receptions for 12 yards and picked up 21 rushing yards on two attempts in the first half.

The Bucs, who forced a turnover on downs on Mercer’s opening possession of the second half, looked to have been in position to score their first points in the third quarter this season. However, after having a 1st-and-goal at the two-yard line situation, the Blue and Gold were pushed back 11 yards – and after Drake Powell (Clinton, Tenn.) couldn’t hold on after laying out for a ball in the end zone – Jerman missed a 30-yard field goal attempt, keeping it a 35-0 score.

Unfortunately, Mercer turned the missed field goal into seven points on the next possession, as the Bears marched 80 yards on seven plays in 2:28 – capped by an 8-yard touchdown run by Payton Usher – making it 42-0 with 3:24 left in the third quarter. Prior to the score, ETSU looked to have forced its second turnover of the game, but the officials determined cornerback Tavian Lott (D’Lo, Miss.) didn’t have full control of the ball and his interception was waived off in the end zone.

The Bears added another touchdown two minutes later and wrapped up their scoring with a 28-yard field goal by Cole Fisher with 9:39 remaining in the game.

For the fourth time this season, red-shirt freshman linebacker Dylan Weigel (Pickerington, Ohio) paced the defense in tackles with 11 (one for loss), while fellow freshman Cole West (Oneida, Tenn.) added 10 tackles. Weigel was also credited the fumble recovery on the opening drive of the game, marking his second of the season.