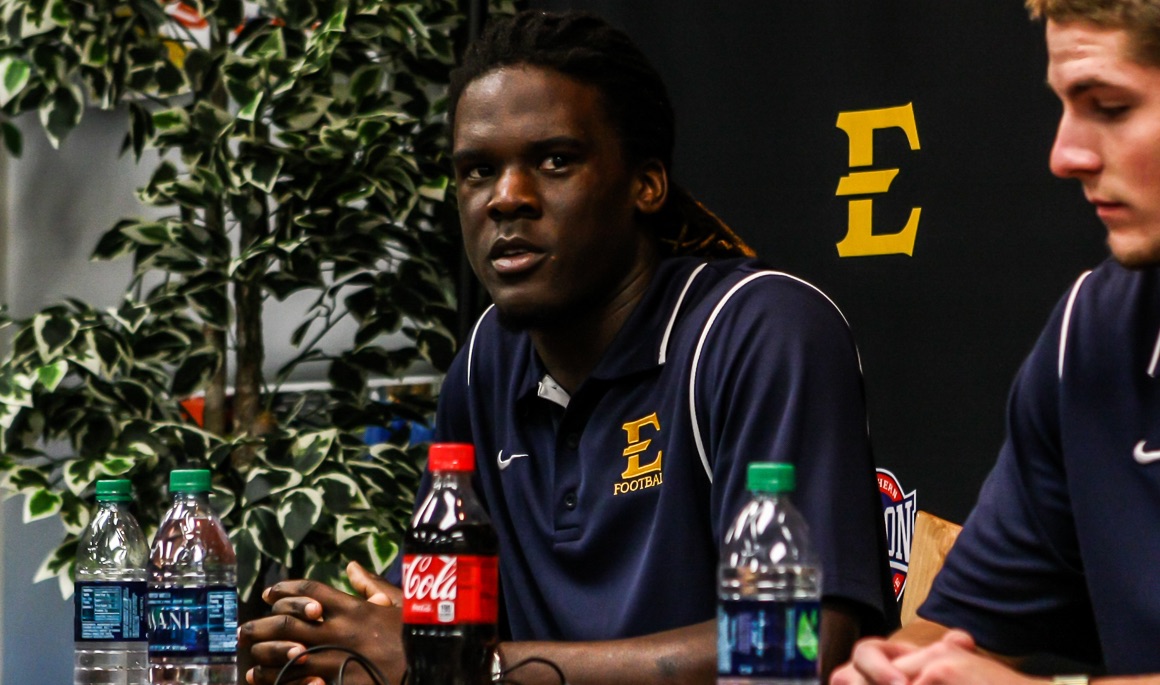 Head coach Carl Torbush and players Hank Black (Knoxville, Tenn.) and Keanu James (Dacula, Ga.) met the media at the press luncheon as the Bucs head into game week against No. 19/21 Montana State on Saturday afternoon in Bozeman, Mont. Kickoff is set for 4:35 p.m. (Eastern).

Below are comments by Coach Torbush, Black and James.

I thought we came out with great energy and enthusiasm against Mercer. We forced a fumble on the opening drive and if we could’ve scored points (off that turnover) it would have given us momentum. We didn’t get anything out of it (the fumble) and Mercer put us in a big hole by scoring on its last five possessions of the first half.

We did not do a good job on both sides of the ball on third down situations. We had trouble stopping them on third and fourth down, and our offense couldn’t convert on third down. We understand we have to do a better job in those situations. If our defense makes stops they get off the field, and vice versa, if our offense converts on third downs we can move the ball and put points on the board.

The Mercer game gave us a chance to see what playing in the SoCon is going to be like. We are not where we need to be, but it gave us an indication where we need to go. Mercer has great facilities, great players and are a well-coached team. They could be 6-0, but they are 3-3 and have been in every game. We were able to take things away from the game and their program to help prepare us for the future.

We knew this was going to be tough, especially these two road games against Mercer and Montana State. Montana State is one of the top teams and plays in one of the best conferences in the FCS. They are a nationally ranked team and have a really explosive offense. Their quarterback reminds me of Johnny Manziel. He’s a very exciting player and can turn a bad play into a good play. He’s very athletic and can hurt opponents both with his feet and arm. They are also very athletic at the skill positions and have a strong offensive line.

They return nine starters on offense but lost quite a few players on defense. They are sitting here 3-3, but their three losses have been very high scoring. We can’t get in that type of game on Saturday. We need to make it a low to mid scoring game. We have to do a good job in all three phases. On defense, we need to stop them on third downs and force turnovers, while converting on third downs and controlling the clock on offense. This will be a great challenge for our program. Montana State gets a tremendous amount of fan support and they have a great stadium.

They are going to have 20,000 people on their side, so it will be a hostile environment. This will be good for our players to see how they respond to adversity. It gives our team the chance to understand where we are and where we need to go.

This will be the first time for a lot of guys to be on a plane and travel to Montana. It’s an exciting opportunity. The keys to the game are getting stops on third down and not getting in a shootout with them. If we can do what we are capable of doing – make them go the length of the field, force turnovers and move the chains on offense – then we can make it competitive and have a chance to win going into the fourth quarter.

We have to see improvement in our last five games of the season. We haven’t seen that in these last two games and it’s been disappointing. We are finding out what college football is all about in the SoCon and on a national level. These games will help us be a better team down the road.

On Nick Sexton and Austin Herink

Both Nick and Austin will play this week. I thought Nick came in and did a nice job at Mercer. He showed a lot of confidence and did a good job for us. It’s going to take both of them to make us better. We will talk as an offensive staff and make a decision on our starter later in the week. Both will play and whoever has the hot hand will get more reps. I am confident in both of them and we have to make sure whoever is in there is comfortable as the starter.

On the attitude of the team

I think we have a good attitude right now. We knew this was going to be tough, but we have to focus on working hard and getting better each day. We have to get better and this week is another opportunity to do that.

This is a great opportunity for us. Montana State is a really good team and this will be a strong test for us. A lot of us haven’t traveled this far, so it will be a good experience.

On coming back from injury

It was tough process, but it has made me tougher as a person. I didn’t know what to expect when I came back from injury. I just had to go out there and see how I felt. I am improving each week and getting back to my old self.

On attitude of the team

We are still growing as a team. We need to continue to work hard and if we play to our fullest potential good things will happen. We have shown that in spurts, but need to put it together for four quarters.

They have an explosive offense. Their quarterback is a big threat and their wide receivers can create a lot of problems. We have to do a better job of stopping them on third downs and getting off the field.

A lot of us haven’t been to Montana and we are looking forward to playing in a tough environment. It’s a big opportunity and a challenge to face a team like Montana State.