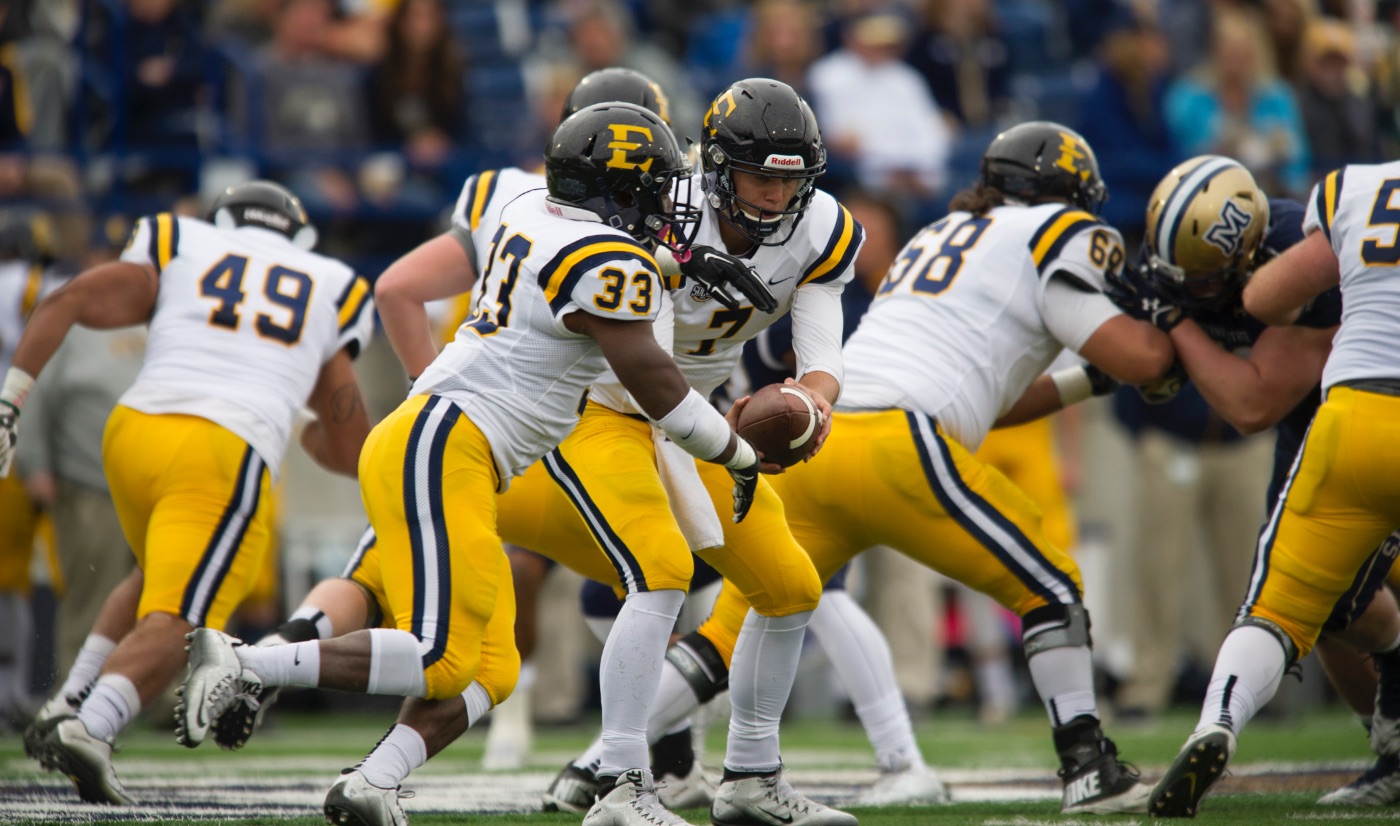 BOZEMAN, Mont. (Oct. 24, 2015) – Facing one of the nation’s best Football Championship Subdivision teams, the ETSU football team got a first-hand look Saturday at the type of program the Buccaneers are aiming to build in the future.

No. 21-ranked Montana State and its highly-touted offense scored touchdowns on five of its six first-half possessions, sprinting to a 35-0 halftime lead and ultimately taking a 63-7 victory over the Bucs in front of 18,617 fans at Bobcat Stadium. With the win, Montana State improved to 4-3 on the season, while ETSU drops to 0-7.

While the Bucs did compile a strong 376 yards in total offense, Montana State bested that number with 514 yards in offense itself. Bobcats’ quarterback Dakota Prukop was particularly impressive, hitting on 15-of-21 pass attempts for 226 yards, while seven Montana State tailbacks combined for 201 yards on the ground.

The turnover battle cost the Bucs, as Montana State forced four takeaways in the game.

The Bobcats’ exceptional offense was on display early and often in this matchup, as after holding the Bucs to a three-and-out on the first possession of the game, Montana State put together an 11 play, 50-yard scoring drive that was capped by running back Chad Newell’s 1-yard touchdown run.

While ETSU managed a sustained drive and used up five minutes of game clock on its next possession, a nine-yard blocked punt stung the Bucs and set up the Bobcats at their own 44-yard line. Four plays later and facing fourth-down, Montana State chose to keep its offense on the field and Prukop connected with Justin Paige for a 41-yard touchdown reception. The extra point failed but the Bobcats still led 13-0 at the end of the first quarter.

In the second quarter, the Bucs again put together a solid drive, but a 47-yard field goal attempt by J.J. Jerman (Seymour) missed the mark.

From there, the Montana State offense again showed its efficiency by scoring touchdowns on its next three possessions. Prukop threw scoring passes on back-to-back drives, and later running back Chad Newell picked up a touchdown on a 3-yard run with 4:15 left in the half. Mitch Griebel then converted a two-point rushing attempt, making it 35-0 at the break.

In the third quarter, Montana State opened up with a six-play, 85-yard scoring drive capped by Tavon Todd’s 1-yard dash. The kick was good and the Bobcats led 42-0.

On the ensuing ETSU possession, the Bucs drove deep into Montana State territory at the Bobcats’ 12-yard line, but quarterback Austin Herink (Cleveland) was intercepted by DeMonte King, ending the Bucs’ best scoring opportunity of the game to that point. Taking over at their own 20-yard line, the Bobcats struck again, going 80 yards on seven plays and scoring on Nick LaSane’s 3-yard run to make it 49-0.

In the fourth quarter, an ETSU fumble set up a short field for the Bobcats at the ETSU 23-yard line. Four plays later, Noah James scored on a 1-yard run to make it 56-0. The Bucs ultimately scored midway through the fourth quarter, with Jajuan Lankford (South Pittsburg) rushed four yards for his first collegiate touchdown, wrapping up a 10-play, 75-yard drive.

Unfortunately for ETSU, Montana State quickly got back on the board when Jayshawn Gates took the kickoff 97 yards for a touchdown and wrapped up the game’s scoring at 63-7.

The Bucs will return home next Saturday afternoon to face Warner University at 1 p.m. inside Kermit Tipton Stadium. For more on ETSU football throughout the 2015 season, visit ETSUBucs.com and click on the football link.