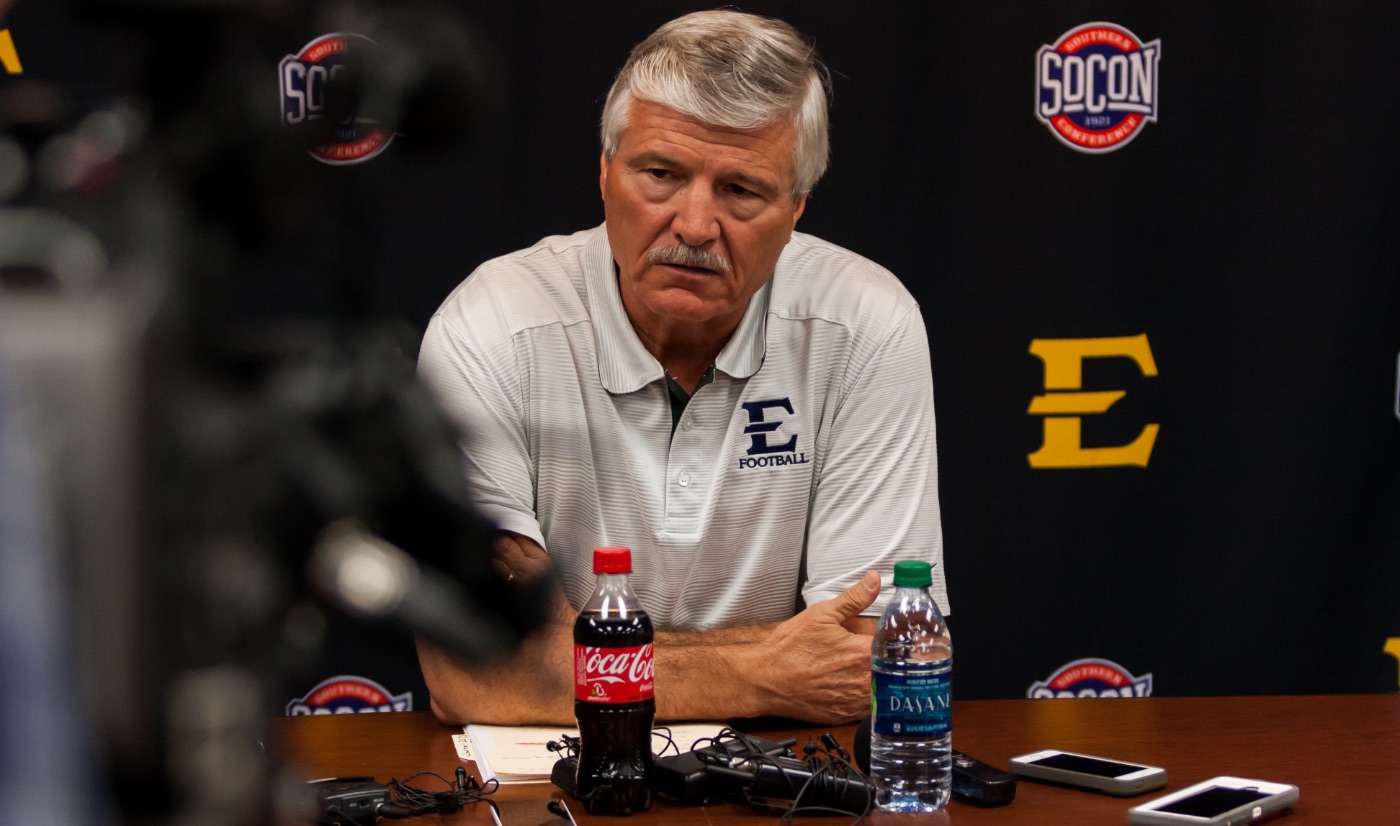 Head coach Carl Torbush and players Dalton Ponchillia (Nashville, Tenn.) and Dylan Weigel (Pickerington, Ohio) met the media at the press luncheon as the Bucs head into game week against Warner on Saturday afternoon. Kickoff is set for 1 p.m., at Kermit Tipton Stadium.

Below are comments by Coach Torbush, Ponchillia and Weigel.

Recapping the trip to Montana

It was a great experience for the team to go out to Montana. The people were friendly and it was a great atmosphere. The stadium was full and had the big-time feel. I thought our players responded well to the challenge.

About the Montana State Game

They (Montana State) looked the part. They were strong, physical and their maturity showed. It gave us a chance to compete against one of the best teams on our level. We were also able to see where we need to go to be like Montana State in the future.

I thought we competed the entire game and played physical. We never gave up and didn’t back down. That makes us proud of them. Down the road this will help be a better team and program.

We knew going in we would have to be mistake free and we weren’t. We shot ourselves in the foot with four turnovers, had a punt blocked and gave up the kickoff return for a touchdown. Those miscues put them in position to score 42 points and we can’t do that against any team; let alone a team like Montana State.

We moved ball well on offense. I thought we ran well, but didn’t protect quarterback like we wanted to. Their size and experience had a lot to do about that.

We tackled well but gave up too many big plays. We didn’t cover the ball like we should have. Their offense will make you pay anytime you aren’t where you need to be. Other than giving up a few big plays, I felt like we were stronger against the run. Our problem again was not getting stops on third and fourth downs to get off the field. Special teams was also a concern. We need to win (in special teams) week-in and week-out, but we haven’t been strong in that phase the last two weeks.

We should be able to bounce back with a lot of confidence. If we play as well as we can and eliminate the mistakes, we will be in position to win these ballgames. It’s a lot easier said than done, but our players and coaches understand what we need to do.

They started out 2-0, but have lost their last six games. They have been in position to win games during this streak, but like us, they have shot themselves in the foot several times. They also have a young team, but have good athletes and show several different looks on offense. They use a split back system and also run the trap. They can also spread you out and throw down field for a big play. They have a strong quarterback and have several talented running backs. On defense, they have physical defensive ends and linebackers. They tackle well and force a lot of turnovers.

Anytime people get behind us, you have to be concerned. That happened a lot last weekend at Montana State. When that happens you don’t have a chance to recover and it typically ends up in points for the opposition. We talk about not giving up big plays and force our opponents into making a mistake. These are things we have to get corrected as a staff so we put our players in position to be successful.

On Playing Montana State Last Week and Warner This Week

I had this at Louisiana Tech, where we played Mississippi State one week and a smaller school the next. We stress to our team each week to not worry about the name on the opponent jersey, but for us to play the best to our ability.

On Former Lettermen Being Recognized on Saturday

We are very excited for the lettermen to come back this Saturday. Without them we wouldn’t be here right now. They have supported us through thick and thin, and have put their blood, sweat and tears into this program. We look forward to recognizing them this weekend.

They are going to run a lot of man coverage, which is what we have seen a lot lately. They have a strong defensive line and talented linebackers.

I like going against man coverage. I like the challenge to try to beat the defender and make a play to help my team.

The loss still hurts. The score didn’t indicate how we though we played. We were able to take some positives away from the game on offense and defense. It was a lot harder to communicate because of the noise, but that was a good experience for us.

The Feeling When First Win Comes

It will be a good feeling. We have been close in a couple of games, so a win will give us some extra confidence as we move forward.

They run the trap, which is new for us. This will be the first time we have seen it this season. We will work on it this week in practice and hopefully will be ready to stop them on Saturday.

On Mood in Locker Room After Loss at Montana State

It’s disappointing whenever you lose, but I thought we played hard. We had guys step up and do some good things on Saturday. We can definitely use this experience as a positive and build on it.

The Feeling When First Win Comes