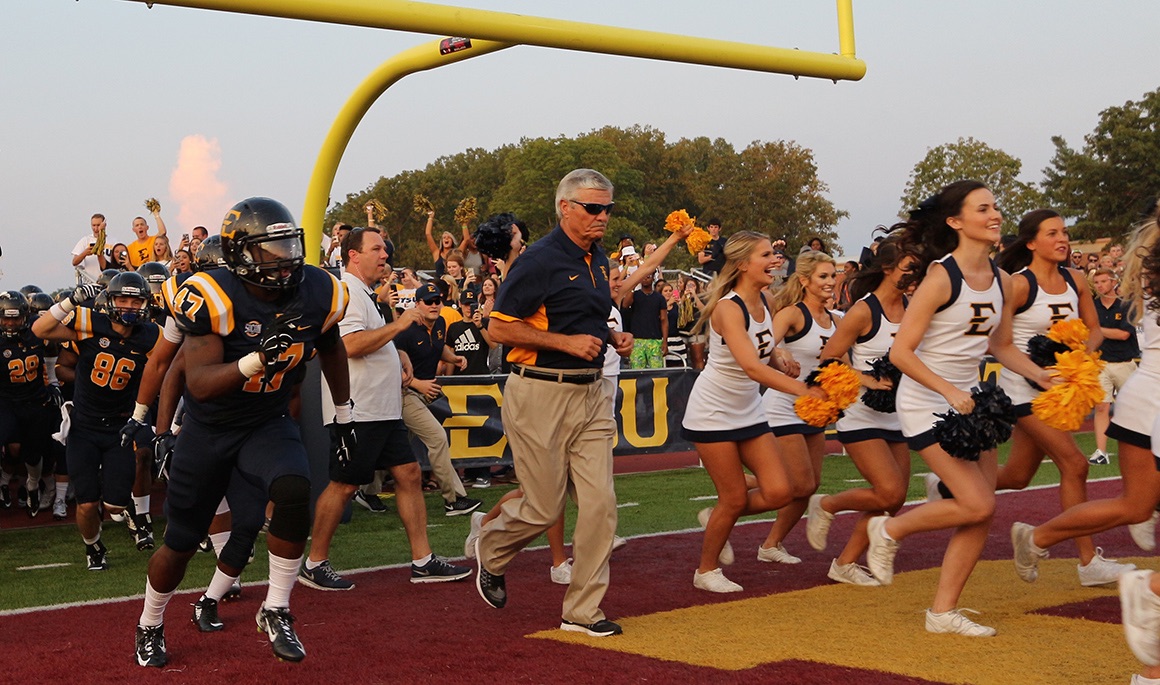 Montana State quarterback Dakota Prukop threw for three touchdowns and running back Chad Newell rushed for a pair of scores as the 21st-ranked Bobcats downed ETSU, 63-7, last Saturday afternoon at Bobcat Stadium … Turnovers and special teams miscues haunted the Blue and Gold as the Bucs turned the ball over four times, had a punt blocked (another go for 10 yards) and surrendered a 97-yard kickoff return, resulting in 42 points for Montana State … ETSU’s offense moved the ball as it totaled 376 yards (170 rushing/206 passing), while the Bucs held the ball for over 33 minutes … The 170 rushing yards marked the second-most for ETSU this season (267 vs. Maryville), while Tony Drew (Nashville, Tenn.) finished with a season-best 77 yards on eight carries … As a team, the Bucs registered 13 plays of 10-plus yards on offense, including a 37-yard reception to Chad Pritchard (Elizabethton, Tenn.), a 36-yard yard catch by Malik Styles (Dandridge, Tenn.) and a 24-yard run from Tony Drew … Jajuan Lankford (South Pittsburg, Tenn.) also had four carries for 22 yards, including his first collegiate touchdown on a 4-yard run in the fourth quarter … Dalton Ponchillia (Nashville, Tenn.) and Drake Powell (Clinton, Tenn.) both kept their streak of having at least one reception alive … Ponchillia led the Bucs with four catches for 64 yards and Powell hauled in one catch … Defensively, linebacker Dylan Weigel (Pickerington, Ohio) paced the Blue and Gold with 12 tackles, while safety Tony Welch (Pickerington, Ohio) added seven hits and linebacker Austin Gatewood (Ooltewah, Tenn.) finished with four (one for a loss) … It marked the second straight game ETSU allowed 300 yards passing and the 63 points were the most given up since Miami (Fla.) scored 66 back on Sept. 5, 1998.

After winning its first two games of the season, Warner (2-6) has lost its last six, including a 45-14 setback at San Diego last week where the Royals were held to 90 yards on the ground and 195 passing yards … Defensively, Warner allowed 526 yards (247 rushing/278 passing) and was outscored 24-0 in the final 40-plus minutes of the game … The Royals averaged 38 points in their first two wins, while holding the opponents to 12 points per game in those contests … During this six-game losing streak, Warner is allowing 41.3 points per game and averaging 16.8 points per game … Overall, Warner’s defense has forced 20 turnovers (10 INTs/10 fumbles) on the season and have forced at least one turnover in each of its first eight games, including a season-best six turnovers in the season-opening win over Concordia … They have also forced multiple turnovers in five of its eight games … Junior linebacker Loronza Smith is a first-team all-conference selection and led the conference with 119 tackles in 2014 and ranked seventh in the NAIA in tackles per game (11.9) … This season Smith leads the team with 70 tackles (four for loss) and has two interceptions … The Royals’ defense held Concordia College to 134 yards (40 rushing/94 passing) in its season opener … Offensively, Warner ranks second in the Sun Conference in pass offense per game (199.8) and third down conversion (40%), while sophomore quarterback DJ Davis ranks second in total offense per game (186.1), total offense (1,489) and passing (1,318) … Warner rushed for a season-high 217 yards in the win at Union College, while passing for a season-best 255 yards in the loss at Belhaven … They have passed for multiple touchdowns in four of its eight games.

This marks the first-ever meeting between the two programs.

The Bucs hit the road for back-to-back games beginning next Saturday, Nov. 7, at Robert Morris … Kickoff is slated for noon at Joe Walton Stadium.