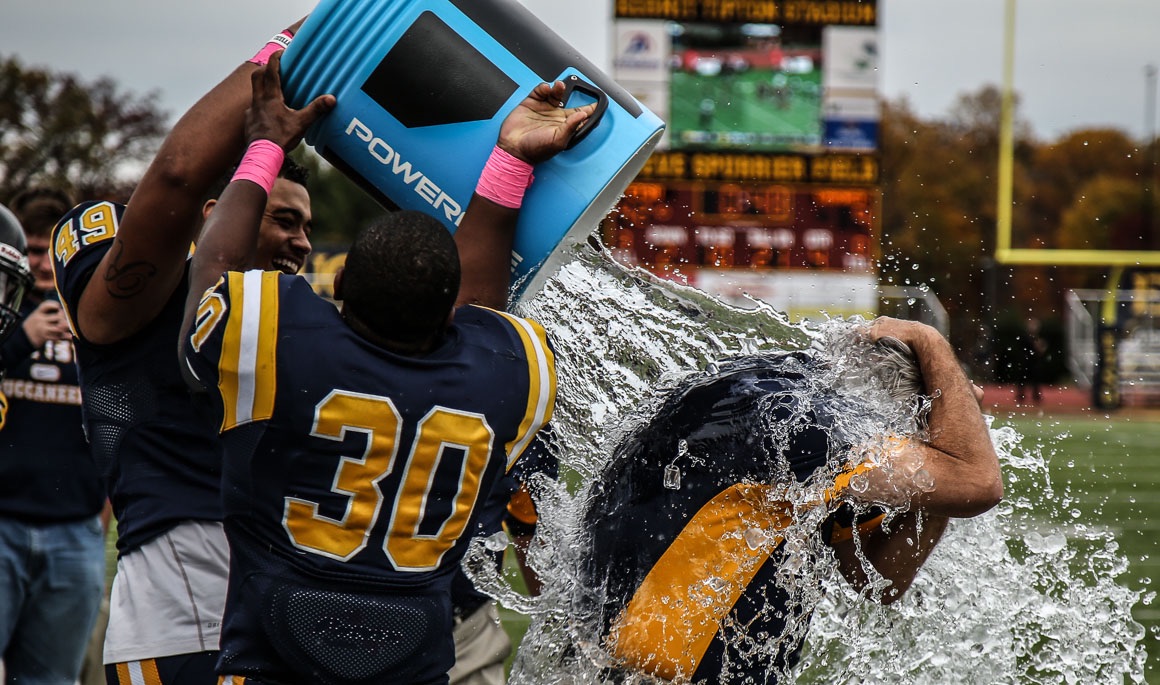 Scoring 28 unanswered points in the first half, the Buccaneers collected a season-high 457 yards in total offense and the team’s defensive unit did not allow any points, as ETSU secured its first victory since reinstituting its football program with a 42-9 win over Warner in front of a Halloween crowd of 6,480 fans at Kermit Tipton Stadium.

The Bucs were led by redshirt freshman tailback Jajuan Stinson (Knoxville), who had a season-high 115 yards rushing and scored two touchdowns on the day. In addition, redshirt freshman quarterback Austin Herink (Cleveland) accounted for a pair of scores, while passing for 97 yards and rushing for another 52.

This was the first victory for ETSU football since a 16-13 win over The Citadel back on Nov. 22, 2003, prior to the program being disbanded for 11 seasons. Head coach Carl Torbush received a Powerade bath in the final seconds of the game as the team enjoyed an emotional celebration on the field.

“We’ve had to taste a lot of vinegar the last few weeks, so this one is pretty sweet,” Torbush said. “This means so much to our program and to everyone involved with ETSU athletics. Tomorrow is going to be fun to watch the film and I think everyone saw the players – they are pretty excited.”

ETSU wasted little time getting on the scoreboard in this matchup with the Royals.

After a quick three-and-out by Warner on the first possession of the game, the Bucs took advantage of a roughing-the-kicker penalty to maintain its first drive of the contest. On the first play following the penalty, Herink found sophomore wide receiver Dalton Ponchillia (Nashville) for a 40-yard touchdown pass. The four-play drive covered 61 yards and the Bucs led 7-0 just four minutes into the game. .

Warner’s issues continued on the next possession, as quarterback Darrin Davis Jr. fumbled on a third-down play and the ball was recovered by ETSU safety Austin Jackson (Cary, N.C.) at the Warner 41-yard line. The Bucs quickly capitalized on the turnover, capping a seven-play, 41-yard drive with a 1-yard scoring run by Stinson.

With the Bucs leading 14-0 midway through the first quarter, another Warner penalty for blocking in the back negated what appeared to be a kickoff return for a touchdown by Royals. Yet again, the ETSU defense forced Warner into another punt and gave the ball back to the Bucs’ offense.

Herink’s legs did much of the work on the Bucs third possession of the game. The quarterback broke a 33-yard run to set up ETSU deep in Warner territory, and Herink later scored on an 8-yard option play to make it 21-0 with two minutes remaining in the first quarter.

ETSU kept up the offensive display in the second quarter, as an eight-play, 87-yard scoring drive resulted in a one-yard scoring run by freshman quarterback Nick Sexton (Seymour). Stinson was the engine that powered the drive with runs of 38, 20 and seven yards. It was the longest scoring drive of the season for the Bucs and made it 28-0 with 10 minutes left in the half.

The Bucs ended the first half with 320 yards of total offense compared to just 100 yards for the Royals, and ETSU scored on four of its five first-half offensive possessions.

Starting the second half, the Bucs were held on downs, but Warner’s Jeffrey Suarez Jr., fumbled the punt and ETSU’s Alonzo Francois (Ooltewah, Tenn.) recovered the loose ball. Starting on the Royals’ 30-yard line, the Bucs needed just seven plays to cover the 30-yard distance and score on a 2-yard run by Stinson to make it 35-0 with nine minutes left in the third quarter.

In the fourth quarter, redshirt freshman running back Cory Colder (Ashburn, Va.) joined the fun with his first score of the season, an 11-yard touchdown jaunt that capped an eight-play, 63-yard drive and made the score 42-0 in favor of the Bucs.

Warner’s lone points for the game came late in the contest – and were not scored by its offensive unit. Following an ETSU interception by ETSU cornerback Domenique Williams (Charlotte, N.C.), Williams stepped out of bounds on the Bucs’ 1-yard line. This set up the Bucs’ offense deep in its own territory, allowing the Warner defense to stuff a run play for a safety.

Just minutes later, the Bucs then fumbled a running play and Warner’s Raheem Phillips returned the ball for a touchdown.

The Bucs will return to the road for their next two games, a Nov. 7 meeting with Robert Morris in Pittsburgh, Pa., and a Nov. 14 matchup at Gardner-Webb in Boiling Springs, N.C. The team then returns home for the season finale on Nov. 21 against Kentucky-Wesleyan.