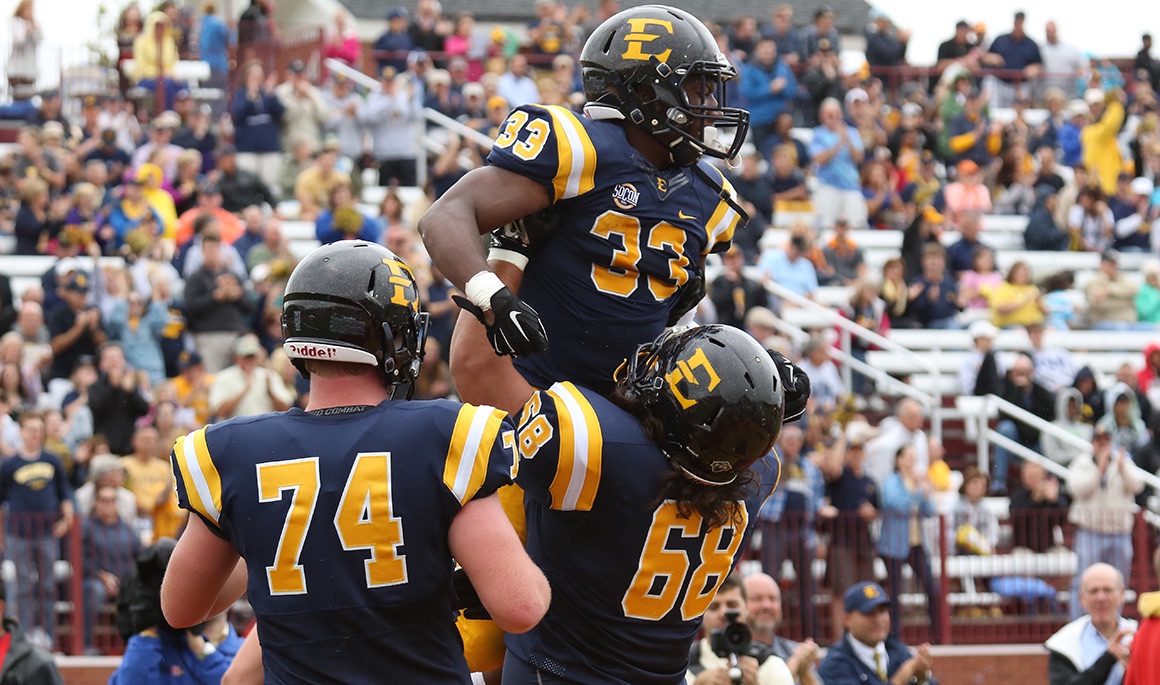 LAST TIME OUT FOR ETSU

Scoring 28 unanswered points in the first half, the Buccaneers collected a season-high 457 yards in total offense and the team’s defensive unit did not allow any points, as ETSU secured its first victory since reinstituting its football program with a 42-9 win over Warner in front of a Halloween crowd of 6,480 fans at Kermit Tipton Stadium … Redshirt freshman tailback Jajuan Stinson (Knoxville, Tenn.) registered his second 100-yard game as he totaled a season-best 115 yards on the ground and scored a pair of touchdowns, while redshirt quarterback Austin Herink (Cleveland, Tenn.) threw and rushed for a score of his own … In total, Herink rushed for a season-high 52 yards, while he and fellow redshirt freshman Nick Sexton (Seymour, Tenn.) combined to go 11-of-13 for 166 yards in the air … Sexton also rushed for a touchdown, while Cory Colder (Ashburn, Va.) and Dalton Ponchillia (Nashville, Tenn.) added the other touchdowns for the Blue and Gold … Colder capped off the scoring with an 11-yard run in the fourth quarter, while Herink found Ponchillia for a 40-yard bomb for the first touchdown of the afternoon … Ponchillia and tailback Falon Lee (Macclenny, Fla.) combined for six receptions (three each) for 103 yards … As a team, ETSU was 5-of-9 on third down and averaged seven yards per play … Seven players recorded at least one reception, while nine players accounted for at least one rushing attempt … On defense, the Blue and Gold held Warner to 172 yards (71 rushing/101 passing), marking the fewest yards allowed this season … The 71 rushing yards were the fewest allowed since holding The Citadel to 53 yards back on Nov. 22, 2003 … In addition, the Buccaneer defense forced three turnovers (two fumbles/one interception) and converted them into 14 points … Freshman defensive back Domenique Williams (Charlotte, N.C.) forced his first collegiate turnover as he intercepted a pass, while red-shirt freshman linebacker Trey Quillin (New Albany, Ohio) – who earned Defensive Player of the Game honors – forced a fumble and recorded four tackles … Fellow red-shirt freshman linebacker Dylan Weigel (Pickerington, Ohio) led the Bucs with 11 tackles … The win was ETSU’s first win since Nov. 22, 2003 when the Bucs defeated The Citadel, 16-13, in its final game played before reinstituting football, marking 4,362 days between wins.

Robert Morris (2-6) suffered its third straight setback after falling at Central Connecticut State, 34-0, last Saturday in New Britain, Conn. ... The game was scoreless in the first half, but the Blue Devils posted 34 unanswered points ... RMU surrendered a 4-yard punt return for the first score, three TD runs (1-yard, 11-yards, 10-yards) and a 39-yard interception return ... Only one of the scoring drives by Central Connecticut was greater of 40 yards ... Saturday’s game marked the fifth time in eight games this season that Robert Morris has shut out an opponent for an entire half ... Wide receiver Kyle Buss tied a single-game Robert Morris freshmen record with eight receptions in Saturday’s loss, while totaling 160 yards ... Buss has now tied the RMU single-season freshman reception record with 34 catches ... Three of Robert Morris’ six losses have been decided by nine points or fewer – Dayton (27-24), then-No. 17 Youngstown State (21-14 in OT), and Duquesne (16-7) ... As a team, Robert Morris ranks second in the FCS in kickoff return defense (15.2), 22nd in team passing efficiency defense (110.07), 23rd in total defense (324.0) and red zone defense (69.7%), 25th in team tackles for loss (7.3) and 29th in rushing defense (139.4) and passing yards allowed (184.6) ... Robert Morris has scored five non-offensive touchdowns this season ... The Colonials have scored twice via an interception and also from a kick return, a punt return and a blocked punt ... All five of those scores have come at home ... Running backs Cole Blake (55.5) and Rameses (51.3) rank fifth and sixth, respectively, in the Northeast Conference in rushing ... Sophomore defensive back Ryan Richards Jr. is tied for the conference lead with three interceptions ... Robert Morris has four players in top 10 in tackles per game – linebacker Jake Tkach is first in tackles (8.9), linebacker Mike Stojkovic (8.5), linebacker Kimani Smith (7.7) and defensive lineman Austin Trgovcich (5.0) ... Three players in top-10 in sacks – Trgovicich is fifth (5.0), defensive lineman Forrest Mason is sixth (4.5) and linebacker Jimmy Masson is tied for seventh (4) ... Two players in top-10 in tackles for loss – Mason is tied for seventh (8.5) and Smith is 10th (8.0)

This marks the first-ever meeting between the two programs ... ETSU last traveled to Pennsylvania on Sept. 1, 2001, when the Bucs played at Pittsburgh, which marked the first-ever game at Heinz Field … This is the second NEC opponent for the Blue and Gold this season as ETSU hosted St. Francis on Oct. 3 at Kermit Tipton Stadium.

Fans can also listen to the radio call on WXSM-AM 640 The Extreme Sports Monster or on 104.9 NASH Icon. “Voice of the Bucs” Jay Sandos will handle the play-by-play and former Buccaneer quarterback Matt Wilhjelm will be the color analyst.

In addition to following the Bucs on your mobile device and/or tablet with live audio and video, fans can get up to the minute stats by following the action via live stats courtesy of RMUColonials.com. Fans can access live stats on their computers, mobile devices or tablets by clicking here.

The Bucs wrap up the road portion of their season next Saturday (Nov. 14) when ETSU travels to Boiling Springs, N.C., to take on Gardner-Webb … Kickoff is set for 1:30 p.m., at Spangler Stadium.