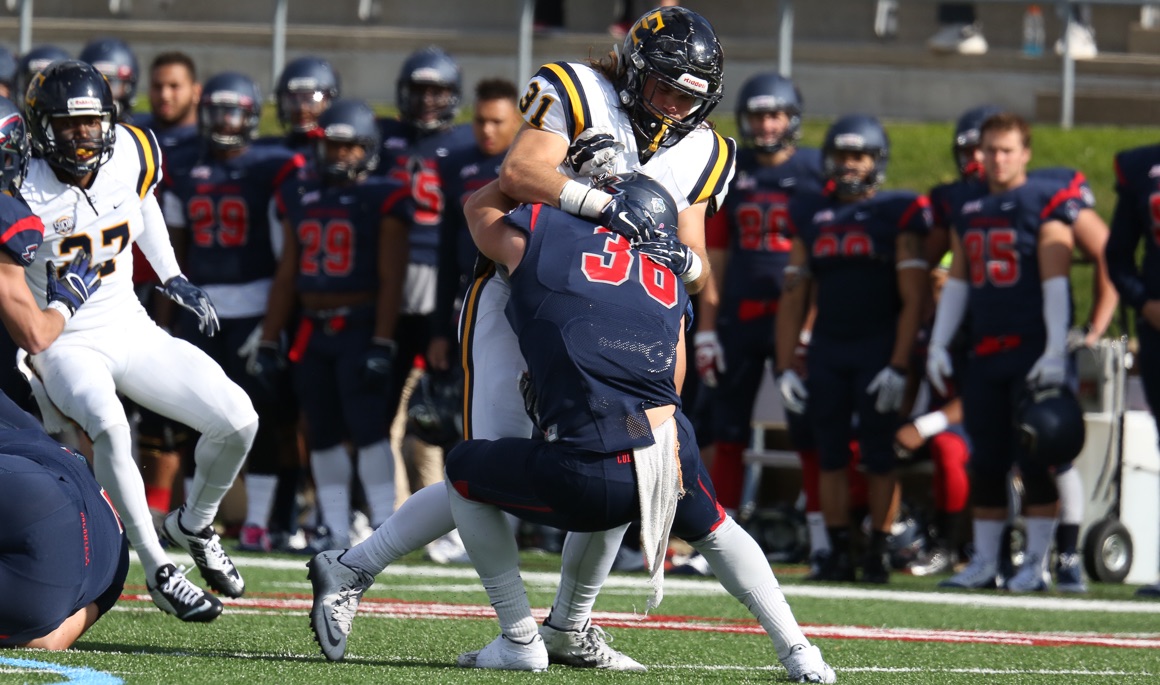 MOON TOWNSHIP, Pa. (Nov. 7, 2015) – The reborn ETSU football team was just three minutes away from its first win over a Football Championships Subdivision team since returning to the gridiron for the first time in 12 years.

Unfortunately, three minutes was too much time to give the Robert Morris Colonials.

Leading 9-7 and with a defensive unit on the field that had dominated throughout the game, the Buccaneers had the Colonials pinned on the Robert Morris’ 16-yard line with 3:28 left in regulation Saturday afternoon at Joe Walton Stadium. However, on the first play of that drive, disaster struck as quarterback Matt Barr connected with wide receiver Kyle Buss for a game-deciding, 84-yard touchdown strike that ultimately powered the Colonials (3-6) to a 21-9 victory over the Bucs.

While ETSU dropped to 1-8 on the season, the Bucs leave Pennsylvania having stood toe-to-toe with an established FCS program and six-time Northeast Conference champion. The Bucs held Robert Morris to just 97 yards rushing in the game, allowed only 141 yards passing when one excludes the final 84-yard pass play, and forced three fumbles in the contest.

However, while the Bucs defense and special teams stood out, the team’s offense struggled throughout the game behind quarterbacks Austin Herink (Cleveland) and Nick Sexton (Seymour). ETSU finished with only 236 yards in total offense, while Herink and Sexton combined to go just 14-of-32 through the air.

Despite the outcome, it appeared to be the Bucs day for most of the game, as several fortuitous plays and penalties benefited the Blue and Gold throughout the contest – especially in the opening minutes.

On ETSU’s second possession of the game, Robert Morris had apparently blocked a punt attempt by Marion Watson (Waxhaw, N.C.) and returned it for a touchdown, but the Colonials were penalized for being offside on the play. Then, on the Bucs’ third possession, ETSU again was forced to punt and Robert Morris appeared to score a touchdown on the return. This time, however, the Colonials were accessed a personal foul for “leaping” in an attempt to catapult up and block the Bucs’ punt.

While the Bucs were ultimately held on downs deep in Robert Morris territory, ETSU returned the favor later on and held the Colonials on a fourth-down play late in the first quarter. For the third time this season, the Bucs held an opponent scoreless in the first quarter and the score stood at 0-0 heading into the second period.

At that point, ETSU finally broke through with some points, taking over after the failed Robert Morris fourth-down attempt and driving to the Colonials’ 2-yard line. Unfortunately, for the Bucs, a fumble and a penalty pushed the ball back to the 8-yard line and ETSU had to settle for a 25-yard field goal by J.J. Jerman (Seymour), taking a 3-0 lead early on in the second quarter.

ETSU took advantage of another Robert Morris miscue on the ensuing possession, as the Colonials’ punter Connor Shennan shanked a punt attempt and put ETSU on offense at the Robert Morris 45-yard line. The Bucs took seven plays to go 26 yards, and another field goal by Jerman from 35 yards out made it 6-0 with 7:48 left in the half.

The ETSU defense continued to play well, pounding Robert Morris quarterback Matt Barr and even forcing him to fumble on a subsequent possession, but the Bucs were unable to capitalize for additional points. In the end, Robert Morris started its final drive of the first half with 1:19 left on the clock and finally moved the ball with its hurry-up offense, scoring a touchdown on a pass from Barr to wide receiver Craig Thompson with six seconds left before the break, making it 7-6 at the intermission.

In the first half, ETSU’s defense held the Colonials to just 139 yards in total offense, sacking Barr three times and forcing a turnover.

After the break, the Bucs’ special teams made the first significant play of the second half, as Justin Gilliam blocked a punt attempt by Shennan and the Bucs took over possession at the Colonials’ 33-yard line. Six plays later, Jerman connected again on a field goal of 29 yards to give the lead back to the Bucs at 9-7.

While the ETSU offense continued to struggle to find a rhythm, the defensive unit repeatedly protected the Bucs’ precarious 9-7 lead throughout the third quarter, forcing multiple three-and-outs by the Colonials.

The defense came through again on the first play of the fourth quarter, as Barr completed a pass to Thompson, but ETSU safety Tavian Lott (D’Lo, Miss.) knocked the ball loose and fellow defensive back Keanu James (Dacula, Ga.) recovered the fumble. Unfortunately, the ETSU offense again could not capitalize to score any points.

Even more good fortune came ETSU’s way later in the game, as the Bucs punted away to Robert Morris and the ball hit one of the Colonials’ players, allowing ETSU to retain the ball with 4:59 left and a two-point lead. Yet again, however, the ETSU offense could not move the ball and was forced to punt to the Colonials.

At this point, the nightmare scenario unfolded as Barr found Buss for the go-ahead score on an 84-yard touchdown reception.

The Bucs had a final opportunity on offense, but a poor kickoff return, a blocking penalty and an unsportsmanlike infraction put ETSU at its own 5-yard line with three minutes left in the game. Herink was unable to mount a drive and Robert Morris took over on downs. The Colonials then added another score thanks to a touchdown run by Cole Black on the next play from scrimmage to make the final score 21-9.

The Buccaneers will be back on the road next Saturday, Nov. 14, at 1:30 p.m. for a matchup with Big South Conference member Gardner-Webb in Boiling Springs, N.C. The team will then return to Johnson City for its final game of the season against Kentucky Wesleyan on Nov. 21 at Kermit Tipton Stadium.